ABSTRACT: Launea cornuta Asteraceae is widely used among African communities for its medicinal and nutritional values and livestock fodder. Traditionally, it is used by Kenyan communities to manage diabetes mellitus, syphilis, and stomachache, among many other diseases. The current study profiled the organic chemical compounds in the ethyl acetate extracts of L. cornuta. Chemical compounds were identified using gas chromatography coupled to a mass spectrometer. The compounds chromatograms were deconvoluted and identified by matching with NIST 11 mass spectral database. The following chemical compounds were identified; isoquinoline alkaloids, terpenoids, and phytosterols, among others. The presence of diverse chemical compounds supports the medicinal and nutritional uses of L. cornuta among African communities.

INTRODUCTION: The use of medicinal plants as a normative foundation for good health in developed nations has been observed since times immemorial 1. The growing reliance and use of medicinal plants in modern societies are basically fueled by advances in extractions, extracts processing, and analyses technologies instrumentation 2. Consequently, interest in the use of medicinal plants in primary health care has grown tremendously due to escalating costs of prescription drugs, poor efficacy of conventional drugs due to the emergence of multi-drug resistant bugs, increase in side effects associated with conventional drugs and growing enthusiasm among the scientific community in bio-prospecting of new plant-derived formulations.

Laureate cornuta Asteraceae is a perennial herb that grows 1.30 m in height, and is widely dispersed from NE Africa to South Central Africa3. Vegetative parts form nutritious vegetable stem and fodder for sheep, rabbits and cattle by communities in Kenya and Tanzania 4. Boiled leaves decoction is used as a hair-wash to kill lice5. In Tanzania, the plant is used to manage pain in the spleen, and the bitter sap is used to treat earache5. Cold water infusion is taken in Malawi to treat stomachache, and a root decoction with leaves sap has a similar use in Tanzania 5.

Small pieces chopped-up and boiled in a little water, produces a liquor that is taken by people among Kenyan communities to treat sore throat. The root is used in Tanzania for treatment of gonorrhea, syphilis, and cough; and as a lotion for eye-infections 6. In Kenya, the plant decoction is thought to be a proper regimen for management of diabetes mellitus.

Plants are endowed with a diverse range of secondary metabolites whose roles within plants are elusive. However, most of them have pharmacological activities, and these have been exploited to provide medicinal drugs such as codeine, morphine, digoxin and quinine 7. Some secondary metabolites have proved to be too toxic for human use such as aconitine from aconite, but investigations of their mode of action have stimulated research into synthetic analogs that have proved to be potential therapeutic agents 8. Despite many uses of L. cornuta, no data is showing the chemical composition of its ethyl acetate extracts. This work was carried out to profile chemical compounds from ethyl acetate extracts of L. cornuta.

Collection and Preparation of Plant Extract: L. cornutashrubs were collected in February and March 2011, from Mbeu Village, Tigania, Meru County of Kenya. A taxonomist authenticated the plant at the Department of Plant and Microbial Sciences, Kenyatta University, Kenya and a voucher specimen deposited at the Kenyatta University Herbarium for future reference. They were cut into small portions and dried at room temperature under shade for one month. The dried plant material was ground using an Electric mill (Christy and Norris Ltd, England), and the powder kept at room temperature away from direct sunlight in air-tight, dry plastic bags. 100 g of the dried powder was macerated in 1 L of ethyl acetate for 24 hours with occasional stirring. After 24 hours the extract was filtered by use of Whatman no. 1 filter paper, and the filtrate was concentrated in a Rotary Evaporator at 40°C. A concentration of 1 mg/kg of ethyl acetate was made from the extract for chemical profiling by use of GC-MS.

GC-MS Analyses: The analyses were carried out by use of a 7890A gas chromatography interfaced with mass spectrometer triple quad system fitted with 7693 auto-sampler, Agilent Technologies, and installed with Mass Hunter Workstation Software version B.05.00 build 5.0.519.0, service pack I © Agilent technologies 2011, for qualitative analysis. A capillary column DB-5, 30 m × 0.25 mm ID and column film thickness of 0.25 µm composed of 100% dimethyl polysiloxane was used. Helium of 99.9999% purity was used as a carrier gas at a flow rate of 1 ml/min. The extract was introduced to the injector at a volume of 1 µl and the split ratio of 10: 1. The inlet temperature was maintained at 250 °C. The oven temperature was programmed initially at 110 °C for 4 min, then increased to 240 °C and finally to 280 °C at a rate of 20 °C for 5 min. The total run time for the extract was 40 min. The MS transfer line was maintained at a temperature of 250 °C. The source temperature was maintained at 280 °C. The mass fragments were analyzed using electron impact ionization at 70eV, a scan interval of 0.5 sec, fragments were read from 45 to 450 Da, and data were evaluated using total ion count (TIC). The compounds were identified from chromatograms based on their elution times. The chromatograms of the eluted compounds were deconvoluted and their mass spectra matched with those of the NIST 11 mass spectral database. The NIST 11 database is a fully evaluated collection of electron ionization (EI) mass spectra for various compounds, and it contains MS/MS spectra and GC-data of over 243, 893 spectra of 212, 961 unique compounds with identifications, nearly all with chemical structures 9.

RESULTS AND DISCUSSIONS: As shown in Table 1 and Fig. 1, eighteen (18) compounds were detected from the ethyl acetate extracts of L. cornuta. Of these compounds, only one (compound number 13) could not be identified and thus labeled as unknown. The unknown compound eluted at 34.9 min as shown in Fig. 1 and 2. The seventeen (17) compounds successfully identified belongs to the following classes; isoquinoline alkaloid, phytosterols, vitamins derivatives, terpenoids (e.g., monoterpenoids, diterpenoids derivatives, sesquiterpenoids, pentacyclic triterpenoid), coumarins, fatty acids, and fatty acids derivatives. The most abundant compounds were; 1-decanol, 2-hexyl- and n-hexadecanoic acid as demonstrated by the heights of their peaks in the Fig. 1.

The pentacyclic triterpenoids (PCTT) identified includes; beta-amyrin, lup-20(29)-en-3-one and fern-7-en-3.beta-ol, while phytosterols were stigmasterol and lanosterol. Fatty acids and fatty acids derivatives were also detected in the extracts. The identified phytosterols are triterpenes that are important structural components of plant membranes, and free phytosterols serve to stabilize phospholipid bilayers in plant cell membranes just as cholesterol does in animal cell membranes 10. Most phytosterols contain 28 or 29 carbons and one or two carbon-carbon double bonds, typically one in the sterol nucleus and sometimes a second is the alkyl side chain 10. n-hexadecanoic acid is an essential oil demonstrated to possess antifungal, antihelminthic and antimicrobial activities 11.

Stigmasterol which is plant sterols has been demonstrated in diets of experimental animals treated with colon carcinogens to reduce tumor yields and counteract the proliferative changes associated with carcinogenesis 11. Similar findings demonstrated that stigmasterol and oleanolic acid dose-dependently significantly inhibited the viability and growth of cancer cell lines compared to the peripheral blood mononuclear cells (PBMCs) 12. It has also been shown to promote cholesterol control in the body. Beta-Amyrin is a pentacyclic triterpene with sedative and anxiolytic effects that might involve action on benzodiazepine-type receptors, and the antidepressant effect that involves noradrenergic mechanisms 13. 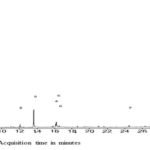 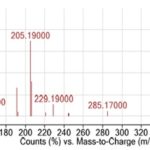 2-Propenoic acid, 6- methyl heptyl ester is a polyunsaturated fatty acid ester which is a strong antioxidant and free radical scavenger, thus an ideal nutraceutical component for management of diabetes mellitus 14. Lup-20(29)-en-3-one is a pentacyclic triterpene that has been demonstrated to induce apoptosis in malignant melanoma cells due to the carbonyl group at C-17 on B16 2F2 cells 15.

Benzimidazo [2, 1- a] isoquinoline is a member of the pyrido [4,3-b] carbazole alkaloid family with anti-tumor activity and was first isolated in 1959 from the leaves of the plant Ochrosia Elliptica 16. Ellipticine is thought to undergo biological oxidation to give the more active 9-hydroxyellipticine that is subsequently converted to a highly reactive quinone-imine intermediate. The quinone-imine is then thought to interact with bio nucleophiles in the body promoting cell death 16. It has been shown to be highly active in-vivo against s. c. colon 38 tumors in mice, providing a growth delay of 12 days 17. Recent studies have evaluated the ability of this compound to inhibit the enzyme topoisomerase II involved in DNA replication and ultimately cell reproduction which is critical processes in cancer progression 17. Fern-7-en-3.beta.-ol is a triterpenoid 18 that possesses anti-inflammatory activity. Compared with dexamethasone, the terpenoids of B. bipinnata has greater anti-inflammatory activity in-vitro experiment 19.

CONCLUSION: The chemical compounds identified in the ethyl acetate extracts of L. cornuta are responsible for the medicinal and nutritive values associated with its use in the folklore.

ACKNOWLEDGEMENT: The authors wish to acknowledge the Kenya Bureau of Standards management for the support including the use of their facilities for analytical work. This study was financially supported by the National Council of Science and Technology (NCST), Kenya, through a grant number NCST/5/003/2nd CALL PhD/102.

CONFLICT OF INTEREST:  None declared