ABSTRACT: A rapid, simple, selective and precise UV-Visible spectrophotometric method has been developed for the determination of Curcumin in bulk and nano-formulation. The spectrophotometric detection was carried out at an absorption maximum of 421 nm using methanol as solvent. The method was validated for various validation parameters. The linearity range was found to be 5-25 μg/ml with a correlation coefficient of 0.9997. The accuracy was found to be within the limit. The LOD and LOQ were found to be 0.4 and 1.21 μg/ml; respectively. The results demonstrated that the method could be conveniently employed for routine quality control analysis of Curcumin in bulk and formulations.

INTRODUCTION: Turmeric consists of dried and fresh rhizomes of the plant known as curcuma longa Linn. belonging to family Zingiberaceae. Traditionally, the plant Curcuma longa widely used to impart flavor and color to the food. Curcumin is the active ingredient of turmeric; turmeric contains 2.85% to 6.14% w/w Curcumin. Curcumin is freely soluble in methanol, chloroform, ethanol, and acetone but practically insoluble in water. Curcumin can suppress both acute and chronic inflammation. Also helps to prevent the damage of the skin from UV rays of the sun 1, 2.

Various analytical methods have been developed in recent year for the quality control analysis of herbs and their formulation including; HPLC, HPTLC and UV-Visible Spectrophotometry 3. As per the ICH guideline of drug analysis, there is a need for an analytical method which is simple, sensitive, rapid and accurate for estimation of herbs and their formulation 4. Therefore, the present work aimed to develop and validate a method for the analysis of herbal formulation of Curcumin by UV-Visible spectrophotometer which is acceptable for routine quality control testing.

MATERIALS AND METHODS: Curcumin was extracted from Turmeric. All the other chemicals and reagents used were of analytical grade.

Preparation of Turmeric Extract: The Turmeric was collected and dried for 2 days in sunlight. Then crushed to fine powder and then passed from sieve no. 60. The collected powder was subject to maceration with ethanol in iodine flask for 7 days. The extract was filtered and decolorized with charcoal to get a clear liquid. The further extract was evaporated to get the semisolid mass then vacuum dried to a fine powder.

Formulation Development: Curcumin nano-particles were prepared by nano-precipitation methods 5 with slight modifications. Curcumin along with Eudragit E 100 was added to ethanol and vortexed to dissolve, which was then emulsified with an aqueous phase containing poloxamer 188 and β-cyclodextrin under sonication for 10 minutes to form nanoparticles and the sonication process was further continued up to 1 hr to remove the residual organic solvent present in the nanoformulation.

Standard stock Solution: Stock solutions of curcumin containing 10 μg/ml were prepared in methanol, and its aliquots were transferred in a series of 10 ml volumetric flasks in varying fractions, and their volumes were made with methanol to prepare different standard dilutions.

Selection and Optimization of Solvent: Different solvents were optimized. Out of which methanol satisfied all the conditions relative to peak quality & non-interference at the specified wavelength.

Selection of Wavelength: The wavelength at which maximum absorption takes place in UV detector was selected for further analysis, i.e. 421 nm.

Method Validation: 7-10 Validation of the method was carried out as per the guidelines. LOD and LOQ were experimentally verified by diluting the known concentration of Curcumin until the average responses were approximately 3 or 10 times the standard deviation of the responses for six replicate determinations.

To 1 mL of the supernatant, an equal volume of methanol was added and sonicated followed by filtration through 0.22 μm membrane and analyzed using the developed method.

Stability Study: To assess the drug and formulation stability, stability studies were done according to ICH guidelines. The stability study was carried out. The formulation kept in a humidity chamber maintained at 30 ± 2 °C/ 65 ± 5% RH and 40 ± 2 °C / 75 ± 5% RH for two months. At the end of the study period, samples were analyzed for the drug content and the presence of any extra peaks.

RESULTS AND DISCUSSION: The proposed method was found to be simple, sensitive, accurate, precise, economical and rapid for the routine estimation of Curcumin in bulk and pharmaceutical dosage forms.

Analysis of the Drug: Spectral scan λ-max of curcumin was found to be at 421 nm.

Method Validation: The method was validated, and the results of different validation parameters were reported in Table 1.

Linearity and Range: Excellent linear correlations were obtained between absorbance and concentration in the selected range of 5 - 25 μg/ml with a correlation coefficient of 0.9997 Fig. 1. 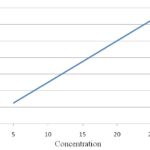 Accuracy: The % recovery for the standard analysis and reference analysis method for all the three concentration levels ranged from 99.2% to 101.1% which showed that any small change in the drug concentration could be accurately determined with high accuracy.

Specificity: The presence of excipients in formulation does not interfere with the drug peak. Therefore, the proposed method was found specific and selective for the drug.

Application of the Validated UV-Visible Spectrophotometer Method on the Formulation: The formulation was analyzed by the proposed method. The assay value for formulations was found to be 99.88 % Table 1.

CONCLUSION: The analytical method developed on UV- Visible Spectrophotometer was simple, reliable, accurate and reproducible. The method was successfully validated and can be conveniently employed for routine quality control analysis of Curcumin in bulk drug and other formulations without any interference from excipients.