ABSTRACT: The Characean alga, Chara zeylanica was experimentally exposed to Cadmium ion concentrations ranging from 1, 3, 5, 7 and 10 ppb for 7 days. The ultrastructural studies and TEM X-ray microanalysis were performed on the alga exposed to 10 ppb cadmium ion concentration after 7 days of the treatment period. A fine structural examination of the cells revealed that in Cd-treated cells, the cell wall showed the absence of undulating layers,  more compactness in their arrangement and much lesser in thickness than the control cells. TEM studies showed striking changes in the plastids of treated algae. They were completely devoid of starch grains. The cell organelles were lacking in the cytoplasm, but it showed the presence of several myelin-like bodies.

INTRODUCTION: Heavy metals are introduced into the environment through some industrial processes. Depending on the chemical form and exposure level, heavy metals can potentially be very harmful to humans and hurt the environment. Unlike organic pollutants, metal contamination is exacerbated by the fact that metals are a non-degradable, re-circulating contaminant and accumulate in the environment. As a direct result of this fact, it is necessary to remediate heavily contaminated sites by metal remediation strategies; researchers are now turning toward natural systems. Remediation through plants is a very active and effective approach to remediate natural waters and soils. Also, the use of algae and other microorganisms in metals pre-concentration and remediation has a long history with encouraging results as most of the algae can concentrate a tremendous amount of metal ions in their cells.

Within the group of heavy metals Cadmium is recognized as one of the most toxic metals with no described biological function. Mining, industrial and agricultural activities have increased the concentration of this metal in the environment. Cadmium occurs in very low concentrations in open water but coastal and estuarine water is normally higher due to anthropogenic inputs.

Recently, 1 provided evidence for a biological role for Cadmium, which is considered one of the most toxic metals in the environment. It increased the activity of carbonic anhydrase, normally Zn-based metalloenzymes. Cadmium, like other metals, can change the species composition of algal communities and can alter severely the different tropic levels 2. Heavy metals are capable of binding with biological materials and in many cases inactivating important biochemically active molecules. They have a strong affinity for the sulphydryl groups of proteins and for this reason, are particularly enzyme inhibitors. They may bind to the thiol (-SH) and nitrogen-containing groups in the enzymes, thus blocking the catalytically active sites. This way they are reported to be “enzyme blockers.”

At the ultrastructural level, all the metals exhibit similar inhibitory effects with their increasing concentrations. These effects include depression in net growth rates, morphological changes in the cells and eventually leading to death.

In laboratory culture, the effects of metals at ultrastructural as well as physiological and biochemical levels have been reviewed by several researchers. The former includes swelling of cells and mitochondrial vacuolation followed by its degeneration 3, disruption of cell separation, formation of cell clumps as well as elongated bent cells 4, fusiform chloroplast with undulated and dilated lamellae, disposal of lipid body into periplasmalemmal space 5, accumulation of large carbohydrate like granules and damaged and reduced number of chloroplast and disintegrated cell wall 6.

In this way, several competitive interactions were reported among different trace metals at different cellular sites. Hence, an effort in this area was made in the present study to evaluate the aspects of metal toxicity at the ultrastructural level in a green alga, Chara zeylanica. The green alga explored in the current study is best known as the Characean algae commonly called as the stonework. It occurs more or less in still, clean waters, freshwater or brackish typically form sub aquatic meadows in shallow waters growing in soft mud.  It flourishes well from August to March but disappears in the hot summer months.

The plant is monoecious, 15-50 cm high, slightly to heavily encrusted and differentiated into nodes and internodes. The axis is slender to moderately stout, is 3 corticated, internodes 3.8-12 cm long, basal segment of the branch is decorticated. The stipules are in 2-tiers, 2 sets per branchlet. They may be well developed or rudimentary. Bracts are present at the nodes of the branchlets. Antheridia and oogonia generally conjoined. Antheridia tetraacetate and oogonia solitary.

MATERIALS AND METHODS: The alga, C. Zeylanica was exposed for 7 days to 10 ppb Cd ion concentration, the concentration at which the plant revealed certain morphologically toxic symptoms. The algal samples (control and treated) were first fixed with phosphate-buffered 2.5% (v/v) glutaraldehyde fixative for 2 h at room temperature than in the refrigerator at 4 °C for 1 h.

The pelleted cells were given repeated cold buffer washes (0.2M, pH 7.2) at least four times of 10 min each. They were embedded in agar solution in the ratio of 1:1. After it solidified, it was cut into approximately 1 mm3 piece and fixed for an additional 30 min in phosphate-buffered 2.5% (v/v) glutaraldehyde in the vials. The agar pieces were rinsed three times with phosphate-buffered 2% osmium tetroxide and then left overnight. The next day, osmium tetroxide was discarded from the vials, and the agar pieces were rinsed with buffer washes (10 min each) at least 4 times. The agar pieces containing algal samples were dehydrated in a graded series of cold acetone (10%, 20 %, 50%, 75%, and 95%). They were then passed through 95% acetone and then through 100 % acetone kept at the room for 20 mi each.

The samples were subjected to infiltration with spurr. To sample vials, 2 to 3 ml of 3 acetone: 1 spurr was added, and the samples were retained in it for 1 to 2 h. This was followed by keeping them in 2 acetone: 2 spurr for 2-3 h and finally in 1 acetone: 3 spurr leaving them overnight on the rotator. The next day, fresh spurr was added to the vials and were kept on the rotator for 1 h.  Finally, pure spur was added to the vials for 3 h so that the blocks just submerged in it. The agar blocks were cut in ultrathin sections and stained with uranyl acetate and lead citrate. Observations were made on Cd-treated and untreated (control) cells of the algae under TEM.

RESULTS AND DISCUSSION: The ultra-structural study of vegetative cells of C. zeylanica cultured in the absence of metal ions revealed thick cell walls with undulating wall layers and vacuolated cytoplasm rich with amyloplast. The cell walls showed a positive reaction with PATAg staining indicating polysaccharidic nature of the walls Plate 1A, 2A and B.

The outer most layer of the thick walls appears denser, and compactly organized compared to the loosely arranged inner wall layers Plate 1A. The inner wall layers closer to the cytoplasm form several protuberances into the peripheral cytoplasm Plate 1A and 2A. 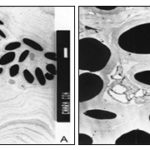 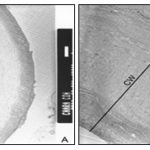 In some of the cells, the walls revealed a tripartite structure with three distinct layers; the outer and inner dense layers are enclosing less dense middle layer Plate 2B. The cytoplasm is vacuolated and composed of several amyloplasts Plate 1B, 2A. The size of amyloplasts and the number, size, and shape of enclosed starch grains vary greatly in the cells. The starch grains appear elongated, oval and horse-shoe shaped in the plastids Plate 1B. The vegetative cells of Chara cultured in 10 ppm concentration of ‘Cd’ revealed ultrastructural differences compare to the cells cultured in the absence of metal ions. The cell walls appear relatively thinner with no undulating wall layers. In some of the cells wall layers run parallel to each other and closely arranged Plate 3A. 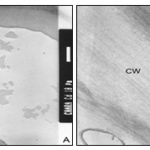 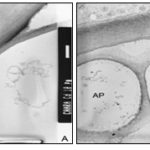 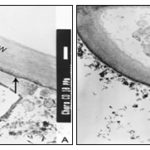 In the three-layered wall, the middle layer appears less contrasted with PATAg staining indicating less distribution of wall polysaccharides Plate 3B. The inner wall layers facing the cytoplasm appear uniform and less dense Plate 4A. Several amyloplasts appear empty following the disintegration of starch grains Plate 4B. Myelin- like bodies are often found in the ‘Cd’ treated cells Plates 4B, 5B. The outer most portion of cell walls appear darkly contrasted Plates 5A, B. Crystalline bodies of different sizes are often found closer to the surface of the cells Plates 5A.

In control plants of Chara, the cell walls are relatively thicker with many undulating layers, and the cytoplasm show many amyloplasts. Most of the study about heavy metal toxicity at the cell level suggests that the cell wall, the chloroplasts, and the mitochondria are the organelles most affected by heavy metals. In the present research, it has been observed that Chara, when treated with 10 ppb Cd ion concentration, the cell wall becomes thinner as compared to that of control, shows the disintegration of cytoplasm and plastids and the presence of elecrodense granules on the cell surface. Such observations were also noticed by several researchers 5, 6, 7, 8. The growth response of the marine alga Dunaliella tertiolecta to different concentrations of lead was studied by 9. The most obvious effects of lead were disrupted thylakoidal membranes, accumulated polyphosphate bodies and vacuoles, and lead precipitates on the cell surface.

Prorocentrum micans Ehrenberg, a free-living marine dinoflagellate exposed to 10-100 ppb Cd ion concentrations exhibited vacuolations, increased numbers of lysosomes, and severe mitochondrial damage 9, 10. It is clear that Sublethal concentrations of these metals caused alterations in the fine structure of internodal cells of the alga. Such ultrastructural aberrations occurring in Chara exposed to Cd, at the cell level might be due to alterations caused by metals. The observed crystalline depositions are of metals sequestered by specific molecules like metallothioneins. In control plants of Chara, the cell walls are relatively thicker with many undulating layers, and the cytoplasm shows many amyloplasts.

CONCLUSION: All the observed alterations like the thinning of the cell wall and the absence of starch in plastids, occurrence of meyline like bodies in the treated cells of C. zeylanica indicated that the Cd ions at 10 ppb concentration could have interfered with the synthesis of both, the structural and storage polysaccharides.

ACKNOWLEDGEMENT: The author is thankful to Prof. K. S. Rao, Ex-Head of the Department of Biosciences, Sardar Patel University, Vallabh Vidyanagar for guiding and providing facilities to carry out this research work.