ABSTRACT: Tea is composed of many compounds. These components have various effects depending upon the amount of tea ingested and the quality of the tea apart from that green tea having various useful properties which are helpful for the human body. The present communication describes about the about the “the comparative data between various brands of tea powders and green tea by using U.V. Spectrophotometer and TLC procedure for the estimation of caffeine content in commercial available tea samples and comparative data of caffeine content along with analysis of different brands of tea samples by comparing with the green tea powder. The present methods show a detailed description of the difference between commercial brands of tea powders and green tea. A possible explanation to account for the variability in green Tea and analysis of different samples is offered.

INTRODUCTION: Tea is the most commonly and widely used soft beverage in the household. It acts as a stimulant for the central nervous system and skeletal muscles. That is why tea removes fatigue, tiredness, and headache. It also increases the capacity of thinking. It is also used for lowering body temperature. The principal constituent of tea, which is responsible for all these properties, is the alkaloid-caffeine. The amount of caffeine in tea leavers varies from sample to sample. Originally, it was thought that caffeine is responsible for the taste and flavor of the tea. But pure caffeine has been found to be a tasteless while substance.

Therefore, the taste and flavor of tea are due to some other substance present in it. There is a little example, some people boast their ability to drink several cups of coffee in evening and yet sleep like a long, on the other hand there are people who are so sensitive to caffeine that even a single cup of coffee will cause a response doubt that the popularity of the xanthenes beverages depends on their stimulant action, although most people are unaware of any stimulation. The degree to which an individual is stimulated by the given amount of caffeine varies from individual to individual. For boarding on the toxic.

The xanthene beverages also create a medical problem. They are dietary of a stimulant of the CNS. Often the physicians face the question of whether to deny caffeine-containing beverages to patients or not. Children are more susceptible than adults to excitation by xanthenes. For this reason, tea and coffee should be excluded from their diet.

Extraction Procedure of Caffeine: Fifty grams of tea powder was taken from the tea bags and placed in a 1000-ml beaker to which 350 ml of water was then added. The whole was boiled for about 30 min and then filtered into another clean beaker. To the filtrate, 10% aqueous solution of lead acetate was added with constant stirring until no precipitate was seen. The resulting mixture was thoroughly stirred and then filtered by suction filtration.

The filtrate was transferred to another clean beaker and concentrated by boiling to a volume of about 25 ml. This was cooled to room temperature. Twenty-five milliliters of chloroform was added to the cold filtrate which was stirred thoroughly with a glass rod.

The aqueous layer was once again extracted with another lot of 20 ml of chloroform. Collect the chloroform in a pre-weighed china dish and allowed to evaporate the chloroform, the dry residue was scraped with a spatula and weighed using an analytical balance.

Purification of  Crude Caffeine: The crude Caffeine is must Purify for removing of impurities for this; crude caffeine was purified by dissolving it in a small quantity of boiling water and then allowing it to cool undisturbed. The needle-shaped crystals of caffeine were filtered out and dried between folds of filter paper. A similar procedure was performed with different samples of tea leaves and quantify of caffeine observed in them. The percentage of Caffeine is calculated by using the following formula

Procedure for the Analysis of Bulk Density: The bulk density of the powder is defined as the ratio of the mass of the powder to its bulk volume. For determination of the bulk density, a weighed quantity of tea powder was introduced into a graduated measuring cylinder. The measuring cylinder was tapped manually till a constant volume was obtained. This volume is known as the bulk volume of the tea powder. The same procedure was followed for each brand of tea powder. 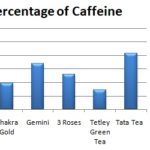 The Intensity of Color: In this experiment, the absorbency of each product was tested to determine the concentration of color. Fig. 2 shows that Chakra Gold and Tetley Green Tea had the lowest absorbency level at a wavelength of 450 nm of 0.329 and 0.216, respectively. Taj Mahal Tea had the highest absorbency level at the same wavelength (0.535). From these results, we concluded that Taj Mahal Tea has the highest concentration of caffeine. 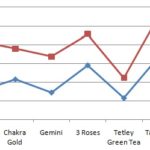 FIG. 2: RF AND ABSORBANCE VALES OF THE SEVEN DIFFERENT BRANDS OF TEA POWDER

TABLE 2: COLOR INTENSITY OF THE SEVEN DIFFERENT BRANDS OF TEA POWDER BY SPECTROPHOTOMETRY

The results showed that Tetley Green Tea Contains Very High density and Gemini Tea Contains low bulk density Table 3. That could be seen since the other five products were having bulk density between 0.41 to 0.45, i.e. the space occupied for air is more than the particles. 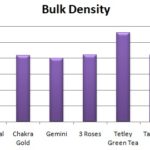 Tea Acidity and Taste: The results Fig. 3 and Table 4 showed that Tetley Green Tea had the lowest pH among the products tested, Taj Mahal and 3 Roses Tea showed a pH of 5.1, which ranks both products as having the highest pH. The rest of the products fall in between, with pH of 5.0. About the taste of the products, the results show a correlation between the pH and the taste. Red Label Tea and Tetley Green Tea with a pH of 4.6 had a very bitter taste that lingered on the tongue. On the other hand 3 Roses and Taj Mahal Tea and tasted only mildly bitter, which could be explained by their higher pH of 5.1.

TABLE 4:  ACIDITY AND TASTE OF THE SEVEN DIFFERENT BRANDS OF TEA POWDER BY ABSORBANCE 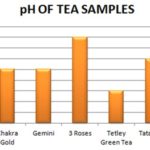 FIG. 4: pH OF THE SEVEN DIFFERENT BRANDS OF TEA POWDER