ABSTRACT: Syzygium cumini is a smooth and famous tree, about 8 to 15 meters high with white branchlets and reddish young shoots. Leaves are opposite, shiny and leathery, oblong-ovate to elliptic or obovate-elliptic, 6 to 12 centimeters long, the tip is broad and shortly pointed. In Unani, the kernel (Khasta-e-Jamun) is used for the treatment. A lot of pharmacological work has been scientifically carried out on various parts of Syzygium cumini but some other traditionally important therapeutically uses are also remaining to proof till now scientifically. It has astringent, carminative, stomachic, diuretic, antidiabetic, anti-diarrheal, anti-inflammatory, radioprotective, gastro-protective, antioxidant, anti-allergic, anti-cancer, anti-bacterial, cardio-protective properties, etc. The various chemical constituents present in Seeds yield glycosides, a trace of pale yellow essential oil, fat, resin, albumin, chlorophyll, an alkaloid- jambosine, gallic acid, 1-galloylglucose, 3-galloylglucose, quercetin, and elements such as zinc, chromium, vanadium, potassium and sodium.

INTRODUCTION: Syzygium cumini is a smooth and famous tree, about 8 to 15 meters high with white branchlets and reddish young shoots. Leaves are opposite, shiny and leathery, oblong-ovate to elliptic or obovate-elliptic, 6 to 12 centimeters long, the tip is broad and shortly pointed. Panicles are borne mostly from the branchlets below the leaves, often being axillary or terminal, about 4 to 6 centimeters long. Flowers are small, numerous, scented, pink or nearly white, in clusters, without stalks, borne in crowded fascicles on the ends of the branchlets.

The calyx is funnel-shaped, about 4 millimeters long and 4-toothed. Petals cohere and fall all. Stamens are numerous and about as long as the calyx.

Origin and Distribution: Widely distributed throughout India- Sub-Himalayan tract, Assam, Burma to Malaya and Peninsular India. Found throughout the Philippines, planted and in many regions spontaneous. It also occurs in the Indo-Malayan region, generally 1, 2, 3, 5, 13, 15, 16, 17.

History: Widely distributed in cultivation in all over India. It is also found throughout the Philippines, planted and in many regions spontaneous. Probably of prehistoric introduction from Malaya. Also occurs in the Indo-Malayan region generally. 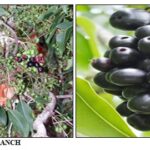 Ethno-pharmacological Uses: One of the most popular fruits in the Philippines. Ripe fruit is eaten outright. Juice can be made into wine; used in the manufacture of red wine. Fruit is a good source of calcium and a fair source of iron. In Malaya, vinegar is made from the juice of the unripe fruit 1, 2, 3, 4, 5, 6, 12, 13, 14, 23.

CONCLUSION: Syzygium cumini is an easily available plant. The fruits being a lot of potent pharmacological activities. The plant belongs to the family Myrtaceae, which has given us many important medicinal plants like S. caryphyllifolium, S. jambolana, S. obovatum, S. obtusifolium, S. cumini etc. Hence, it was not wrong to state that still a lot has to be worked upon this important plant. Apart from this, old traditional texts like Unani, Ayurveda, mention the protective role of Syzygium cumini on important body organs like kidney, digestive etc, many of which are scientifically proven. It contains almost all the properties of pharmaceutical care designed like Astringent, carminative, stomachic, diuretic, antidiabetic, anti-diarrheal. Studies have shown antidiabetic, anti-inflammatory, radioprotective, gastro-protective, antioxidant, CNS depressant, anti-allergic, anti-cancer, antibacterial, cardio-protective etc. In developing countries like India, one must fully explore this important medicinal plant which might provide us some critical “leads” in the near future.