ABSTRACT: Seven different Cyanobacterial species belonging to 4 genera were isolated from the alkaline Lake Lonar, situated in the Buldhana district of Maharashtra. The phycocyanin producing ability of all the isolates was screened. All the isolated alkaliphilic cyanobacteria showed more than 10 mgL-1 of phycocyanin.  From the seven cultures tested, Synechocystis aquatilis showed the highest production of phycocyanin followed by Phormidium laminosum and Oscillatoria amphibian, respectively.  2, 2 diphenyl-1-picrylhydrazyl (DPPH) assay was performed for screening the highest percentage of radical scavenged was shown by Spirulina platensis (40.28), followed by Synechocystis aquatilis (36.32), Phormidium laminosum (34.80) respectively. All the three Cyanobacterial cultures were put under salt stress of 100 to 1000mM. An increase in the % radical scavenging activity was seen when all the three alkaliphilic cyanobacteria were under salt stress. 22% increase in the radical scavenging activity was seen in Spirulina platensis, while 16% increase was observed in the other two cultures. Thus, the antioxidant potential of the alkaliphilic Cyanobacteria isolated from Lonar Lake was revealed.

The use of synthetic anti-oxidants have been decreased due to their suspected activity as promoters of carcinogenesis 2 as well as the general consumer’s rejection of synthetic food additions 3. There is a current worldwide interest in finding new and safe antioxidants from natural sources, e.g. plant material to prevent oxidative deterioration of food and to minimize oxidative damage to living cells 4.

Use of microalgae for human consumption as a source of high-value health food, functional foods and production of biochemical products, such as vitamins, carotenoids, phycocyanin and poly-unsaturated fatty acids including the omega-3 fatty acids have been developed 5, 6, 7. Among the various microalgae that have been explored for their suitability for potential commercial Dunaliella, Chlorella and Spirulina are three major types that have been used successfully to produce high concentrations of valuable compounds such as lipids, protein, and pigments 8, 9. The algae have developed defiance system against photooxidative damage by anti-oxidative mechanisms to detoxify and eliminate these highly reactive oxygen species.

This antioxidant defiance system includes hydrophobic (carotenoids and α-tocopherol) and hydrophilic antioxidant (ascorbic acid and glutathione) and antioxidant enzymes like superoxide dismutase (SOD), catalase (CAT), glutathione reductase (GR) ascorbic peroxidase (APX) and peroxidase (POD) 10, 11, 12. C-Phycocyanin (CPC), isolated from Cyanobacteria, is a major component of the phycobiliprotein family, is gaining increasing importance for its promising antioxidant property. It has a structure similar to bilirubin, a well-known effective scavenger for various reactive species. Recently, the antioxidant and anti-inflammatory properties of CPC isolated from Arthrospira platensis have been reported. Studies have also shown that CPC can prevent and inhibit cancer in human and animals. In the present study, the alkaliphilic Cyanobacteria isolated from the alkaline Lake Lonar were screened for their antioxidant properties.

Isolation and Identification of Alkaliphilic Cyanobacteria: Samples collected from the alkaline Lonar Lake were enriched in the presence of light and BG.11 medium 13. All the enrichments were done in the medium having pH 10 (Lake water pH). The medium was sterilized at 121 °C for 15 min. In flat glass bottles, sterile enrichment medium (50 ml) was inoculated with 5 ml of sample collected from different sites from Lonar Lake. The bottles were incubated under continuous light illumination (fluorescent tubes) at 24 ± 2°C. The growth of Cyanobacteria was judged from visual observations (7 day incubation). The enriched samples were transferred to the same medium having pH 10. The isolates were grown axenically either in BG-11 at pH 10 and 24 ± 2 °C under continuous illumination at 2000 Lux. From morphological characteristics Cyanobacterial cultures were identified to genus and species level as described by Rippka et al., & Desikachary 14, 15.

Extraction of Photosynthetic Pigments: For extraction of phycocyanin (PC) 12 days old Cyanobacterial cells were harvested by centrifugation at 3000×g for 5 min at 20 °C. The cell pellet was collected in methanol. To release phycobiliproteins, the methanolic suspension was subjected to repeated freeze-thaw cycles of -20 °C and 4 °C temperature shocks.

The suspensions were further exposed to ultrasonication at 20 KHz frequency (Sonics and Materials Inc., USA) for 2 min. The cell mass was separated by centrifugation at 5000×g for 20 min and extraction procedure was repeated thrice. The phycocyanin content of pooled supernatants was taken for further analysis.

DPPH Assay: The 2, 2 diphenyl-1-picrylhydrazyl (DPPH) test was carried out as described by Burits and Bucar 16. 0.8 ml of each cyanobacterial extract of the all the 7 isolates was mixed with 1 ml DPPH reagent (0.2 M). Tubes were incubated for 30 min in dark, and the absorbance was measured at 517 nm. % Antioxidant activity was calculated as follows

Effect of Sodium Chloride on Anti-oxidant Activity: The set of Cyanobacterial isolates were tested for the effect of sodium chloride on the antioxidant activity. A series of bottles containing sterile growth medium amended with increasing salt concentrations (100-1000 mM) were inoculated with equal inoculum. The bottles were incubated at 24 ± 2 °C for 12 days. The cell was harvested, and phycocyanin was extracted, and DPPH assay was performed.

Alkaliphilic Cyanobacteria Cultures:  7 different Cyanobacterial species belonging to 4 Genera were isolated from alkaline Lake Lonar. Only one of the seven isolates was unicellular (Synechocystis aquatilis) and all other isolates were filamentous. All the isolated cultures from Lonar Lake were of non-heterocystous nature Table 1. 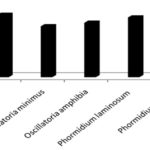 Antioxidant Activity of Alkaliphilic Cyano-bacteria:  The percent radical scavenged by the phycocyanin isolated from seven alkaliphilic Cyanobacterial species is as shown in Fig. 2. 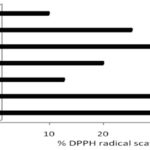 The highest percentage of radical scavenged was shown by Spirulina platensis (40.28), followed by Synechocystis aquatilis (36.32) and Phormidium laminosum (34.80) respectively. None of the Oscillatoria species showed a significant amount of antioxidant activity. The lowest antioxidant activity was reported by Phormidium fragile (9.27). Based on their percent radical scavenging activity the above three alkaliphilc Cyanobacterial cultures were considered for further studies. 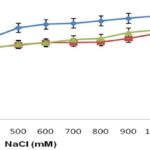 FIG. 3: EFFECT OF SALT ON ANTIOXIDANT ACTIVITY OF PHYCOCYANIN ISOLATED FROM ALKALIPHILIC CYANOBACTERIA

DISCUSSION: Purified CPC has nutraceutical and pharmaceutical potentials. The antioxidant and radical scavenging activities of CPC from different Cyanobacteria are well-documented 17, 18, 19, 20, 21. These activities are mainly attributed to the phycocyanobilin groups. CPC is bleached during scavenging of peroxyl radicals 22, 23, antioxidative activities of free phycocyanobilin are comparable to phycocyanobilin bound in CPC 24 and anti-oxidative activity is increased by denaturing or trypsin digestion of CPC 25. Alkaliphilic micro-organisms offer a multitude of actual or potential applications in various fields of biotechnology.

Not only do many of them produce compounds of industrial interest, but they also possess useful physiological properties which can facilitate their exploitation for commercial purposes. The alkaliphilic Cyanobacteria isolated from Lonar Lake were the promising candidates in the field of biotechnology. Spirulina often dominates the alkaline lakes sp. and other Cyanobacteria like Synechocystis sp. and Phormidium sp. and are well known for their phycocyanin production. Anti-oxidant potential of the alkaliphilic Cyanobacteria isolated from Lonar Lake was revealed.

In the present study among the set of cultures, Spirulina platensis showed the highest antioxidant activity compared to the other Cyanobacterial cultures. The antioxidant activity of all the cultures was found to increase with an increase in the salt concentration. The methanolic extracts of phycocyanin from the three alkaliphilic Cyanobacterial cultures were compared with earlier reports. Shalaby and Shanab 26 reported a maximum yield of 68.5. They also reported the use of polar solvents for the extraction under salt stress. Extracts of S. platensis by organic solvents of different polarities and concentrations showed that the polar solvents (ethanol and water) extracts at higher concentration (100 µg/ml) exhibited higher antioxidant activity (85.0 and 89.9% by DPPH and ABTS, respectively) compared to the standard antioxidant, BHA (86.5 and 91.8%). The obtained results revealed that polar antioxidant substances might be present in the polar Spirulina extract to which attributed the antioxidant activity. These polar substances were found in extracts of different red, brown and green seaweeds 27, 28, 29, 30, 31, 32, 33 as well as in microalgae and Cyanobacterial species 9, 19, 33. These substances mainly include phycocyanin pigment, sulphated polysaccharides and phenolic compounds which are largely present in most macro, micro and Cyanobacterial species which exhibited pronounced antioxidant activity.

CONCLUSION: Seven different Cyanobacterial cultures were isolated from the saline alkaline Lake Lonar. All the cultures were screened for their ability for the production of phycocyanin. The highest percentage of radical scavenged was shown by Spirulina platensis (40.28), followed by Synechocystis aquatilis (36.32), Phormidium laminosum (34.80) respectively using DPPH assay. An increase in the % radical scavenging activity was seen when all the alkaliphilic Cyanobacteria were under salt stress. An increase of 22% activity was seen in Spirulina platensis, while 16%

ACKNOWLEDGEMENT: The author Devendra V. Deshmukh is grateful to School of Life sciences, North Maharashtra University, Jalgaon for providing the laboratories for carrying out research work. We also acknowledge the financial support for instrumentation received from UGC, New Delhi under SAP-DRS and DST, New Delhi under the FIST program.