ABSTRACT: Acacia caesia L. (family Mimosaceae) is a well-known shrub in Southeast Asia, where the natives use it for a wide range of purposes. The Mizo tribes of India use the stem bark for the treatment of gastrointestinal infections. The present study is an attempt to elucidate structural changes on the tegument of chicken tapeworm Raillietina tetragona Molin. upon treatment with the methanol extract of A. caesia stem bark. R. tetragonal recovered from chicken intestines were treated with 20 mg/mL of the plant extract at 37 °C. The tapeworms were fixed in neutral-buffered formaldehyde at 4 °C, and then post-fixed in 1% osmium tetraoxide. They were completely dehydrated using acetone. After treating with tetramethylsilane and drying under room temperature, they were coated with gold. Then they were finally observed under a scanning electron microscope to observe the tegument. Tapeworm showed severe damage to the scolex. Suckers were obliterated. The tegument was distorted and shrunk. The fine microtriches were completely removed. A. caesia stem bark extract is, therefore, a potent anthelmintic agent. Therefore, its chemical components are potential pharmaceutical compounds.

INTRODUCTION: Helminthiasis remains a major infectious disease in humans, livestock animals, and wildlife. In spite of enormous growth in the development and discovery of pharma-ceutical drugs, helminth infestations remain the major factor of economic losses in the animal industry all over the world and the persistent cause of human morbidity and development issues. Commercial anthelmintics are not universally accessible, have adverse effects, and exhibit detrimental effects on non-target organisms leading to environmental concern 1, 2.

On top of it, unprecedented evolution of anthelmintic resistance in helminths practically to all available drugs is now a serious global problem 3, 4. Traditional medicinal plants are embraced as immediate or indirect sources of future drugs 5, 6. Several, scientific investigations have revealed the anthelmintic properties of different medicinal plants, and use of well-established plants is highly endorsed 7, 8. Thus, evaluation of traditional anthelmintic plants is a prime prospect for effective management of helminthiases.

Acacia caesia Linn. (family Mimosaceae) is a leguminous perennial-climbing shrub and is native to Bangladesh, Bhutan, India, Myanmar, Sri Lanka, and Thailand. Among the Mizo tribes of northeast India, the tender leaves are taken as a vegetable and the stem bark as a remedy for intestinal infection. Significant anthelmintic efficacy was demonstrated regarding viability test and structural changes 9. The present study is, therefore, an elaboration of the anthelmintic effects of A. caesia regarding tegumental organization on the tapeworm, Raillietina tetragona Molin.

Preparation of Plant Extract: The fresh stems of A. caesia were collected from the nearby forest of Aizawl, the capital city of Mizoram, India. The specimens were identified and cataloged as reported earlier 9. The barks were peeled off, thoroughly washed with distilled water, cut into small pieces, and dried in a hot air oven at 50 °C. After pulverizing to a fine powder, it was macerated with methanol (100 g/L) with constant refluxing for 72 h. The resulting solution was collected and filtered through Whatman filter paper no. 1 and then concentrated by evaporating the solvent to complete dryness. A deep-green solid extract obtained was refrigerated at 4°C until further use. Before experimental assay, a concentration of 20 mg/mL of the extract was prepared by dissolving in 0.9% neutral phosphate-buffered saline (PBS), supplemented with 1% dimethyl sulfoxide (DMSO). A concentration of 20 mg/mL was chosen as it was observed that the anthelmintic efficacy regarding viability test was optimal at this concentration. The media were maintained at 37 ± 1 °C in a glass-chambered automated incubator.

Recovery and in-vitro Treatment of Tapeworms: Live chicken (Gallus domesticus Linn.) were sacrificed using an overdose of chloroform and upon autopsy, live tapeworms, R. tetragona, were recovered from the intestines. The tapeworms were collected in a culture plate containing PBS and then maintained at 37 ± 1 °C. Tapeworms with more or less similar body size were selected and introduced into the plant extract. One group of tapeworms was maintained in a medium containing only PBS with 1% DMSO to serve as a control. Death was confirmed by briefly dipping the tapeworms in tepid PBS (~45°C) that induced movement in sentient worms.

Scanning Electron Microscopy: The tapeworm was thoroughly washed in PBS, and then immediately fixed in 4% cold-buffered formaldehyde at 4 °C for 12 h. After postfixation in 1% osmium tetraoxide for 1 h, the specimens were dehydrated through ascending concentration of acetone till pure acetone. They were then air-dried after treatment with tetramethylsilane following the standardized procedure developed specifically for helminth parasites 10, 11. After coating with gold in a fine-coat ion sputter, JFC-1100 (JEOL) and mounted on metal stubs, electron micrographs were generated using a JSM-6360 JEOL 1.1 scanning electron microscope at an electron accelerating voltage of 20 kV.

RESULTS: The tapeworms maintained in a control medium that consisted of only PBS with DMSO survived well up to 57.70 ± 1.37 hours (± standard deviation for n=5). Treatment with 20 mg/mL of the plant extract caused mortality at 5.90 ± 0.6 h (which is significantly different at P<0.05 in comparison with the control using Student’s t-test). 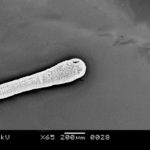 FIG. 1: SCANNING ELECTRON MICROGRAPH OF RAILLIETINA TETRAGONA TREATED WITH 20 mg/mL OF A. CAESIA EXTRACT. THE ANTERIOR BODY SEGMENTS AND THE HEAD REGION CALLED SCOLEX ARE SEVERELY DAMAGED. TWO OVAL-SHAPED SUCKERS CAN BE SEEN BUT WITHOUT PROPER ORGANISATION 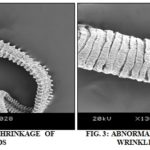 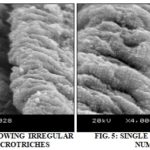 The tapeworm treated with the plant extract showed extensive deformity throughout the entire body surface. The anterior part and the head region called scolex were completely damaged leaving pit-like holes where suckers were present as depicted in Fig. 1. The body segments or proglottids appeared disintegrated so much so that the entire body was shrunk and looked like a deflated balloon Fig. 2.

On higher magnification, each body segment is visible as having abnormally folded and wrinkled appearance Fig. 3. Magnification of two proglottids reveals complete loss of hair-like microtriches Fig. 4, which are smoothly arranged in normal tapeworms. Magnification of a single proglottid shows tissue debris scattered all over the surface and numerous blebs Fig. 5.

DISCUSSION: The present investigation provides the evidence for an anthelmintic potency of the extract of A. caesia stems bark as traditionally used by the Mizo tribes. The general body surface of a tapeworm called tegument is completely covered with delicate hairs called microtriches, giving the overall surface a velvety appearance. The anterior part called scolex bears neatly arranged oval-shaped suckers which are the attachment organs. The body proper is composed of a series of segments called proglottids.

The microtriches on the proglottids are delicate hair-like filaments and are arranged in cascades in thick layers and pointing posteriorly 9, 11. All the fine characters were destroyed after treatment with A. caesia stem bark extract. It was demonstrated that a closely related species, A. oxyphylla stem bark also caused similar effects on Raillietina echinobothrida, including changes in the vital enzymes, and anatomical structure 12, 13.

Flemingia vestita was also reported to cause severe detrimental effects including clumping of the microtriches, vacuolization of the tegument and shrinkage of the body in R. echinobothrida 10. The root bark extract of Millettia pachycarpa was tested to exert extensive damage on the tegument, including entire removal of microtriches, complete erosion of the scolex surface and metabolic obstruction in R. echinobothrida 14, 15. Extract of Artemisia cina was responsible for extensive damage on the scolex and microtriches in the tapeworm Monieza extensa 16. Cassia alata leaf extract caused tegumental blebs with the destruction of microtriches and shrinkage in the scolex of the tapeworm Hymenolepis diminuta 17.

The tegument is the fundamental interface of the tapeworm body with its environment, and responsible for selective absorption of nutrients, secretory activities and sensory perception, rendering it as the primary target of anthelmintic agents. Albendazole and its related benzimidazoles act on tapeworms by entering the body through the tegument by passive diffusion, and directly cause disruption of the tegumental and muscle layers by high specificity binding to β-tubulins, as a result, inhibiting assembly and functioning of the cellular motor proteins 18. Pure albendazole and its sulphoxide combination therapy caused formation of numerous blebs on the tegument, rostellar disorganization and loss of the microtriches on the human tapeworm, Echinococcus granulosus 19.

CONCLUSION: It is therefore probable that A. caesia stem bark contains the unique anthelmintic compound, which has similar effects as standard pharmaceutical drugs. Structural changes observed in the present investigation leads to suggest that the plant extract acts trans-tegumentary to exert damaging effects on the tegument of tapeworm. Therefore, further investigation of the chemical constituents of the plant is imperative.

ACKNOWLEDGEMENT: The author is grateful to the staff of Sophisticated Analytical Instrumentation Facility, North Eastern Hill University at Shillong, for Scanning Electron Microscopy.