ABSTRACT: Loganin is an iridoid glycoside, a key phytoconstituent in Strychnos plants having a crucial role in the biosynthesis of indole, monoterpene alkaloids and other natural products. It is a bitter iridoid glycoside with numerous activities like anti-inflammatory, anti-oxidant, glucose-lowering and anti-diabetic nephropathy activities. The objective of this study was to develop a simple method for isolation of loganin from fruit pulp of Nux vomica and quantify by HPLC. The isolated compound was characterized by TLC, UV, IR, MS, and NMR spectral analysis and purity were confirmed by HPLC analysis. Quantification of loganin was done from fruit, seeds and pulp extract using HPLC. A simple solvent partitioning method was used for the extraction and isolation process. This isolation method developed involved easy solvent-solvent extraction technique followed by recrystallization to purify the compound.

INTRODUCTION: Loganin is a simple monoterpenoid iridoid glycoside obtained in highest concentration from fruit pulp of Nux vomica. It is used as a precursor in the biosynthesis of indole alkaloids and seco iridoids 1, 2. It has a wide range of pharmacological activities like anti-microbial, hepatoprotective, anti-tumor, immune-stimulating, anti-inflammatory, leishmanicidal and cytotoxic activities 3. Loganin as well as its chemical analogs that have been semi-synthesized show activity against human cancer cells 4. It is named after Loganiaceae having first isolated from Nux vomica seeds. It also occurs in Aistania boonei (Apocynaceae), Derfontainia spinosa (Collumelliaceae), Cornus officinalis (Cornaceae), Vinca rosea (Apocynaceae), Menyanthes trifoliata (Menyanthaceae) 5.

Loganin is frequently isolated by column chromatography which is tedious and time-consuming method. Another patented method is reported in which concentrated butanolic extract is refrigerated overnight to obtain a white precipitate of loganin, but this method is least reproducible and not feasible in case of plant material having very low concentrations of loganin. Synthesis of loganin is also accomplished by photochemical cycloaddition of 2-formyl malonaldehyde acid methyl ester to the tetrahydropyronyl ether of 3-cyclopentenol 6. 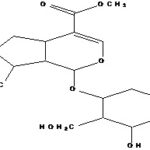 Method of Isolation: Nux vomica fruits were peeled, seeds were separated, and pulp was removed (100g). The pulp was extracted with methanol (500 ml) for 6 h using Soxhlet extractor. Methanolic extract was filtered, concentrated and suspended in water. This was then partitioned three times with each of the solvents; petroleum ether, chloroform, and ethyl acetate respectively. Ethyl acetate layer was concentrated, precipitated using petroleum ether (0.81g). This precipitate obtained was recrystallized with ethanol to give pure loganin (0.56g). TLC and HPLC studies were carried out to determine the purity of the sample while the structure was elucidated and confirmed by UV, IR, MS, and 1HNMR spectral analysis.

Quantification of Loganin in the Pulp, Seeds, and Peel of Strychnos Fruits by HPLC:

Sample Solution Preparation: Continuous hot solvent extraction of fruit pulp was done using a Soxhlet apparatus for 2 h at 50 ºC using solvent drug ratio 10:1 (ml/g). The solvent from the extract was evaporated to obtain a residue. 10mg of the residue was weighed and dissolved in HPLC grade methanol to make up volume up to 10 mL. The solutions were then filtered through a 0.2 µm membrane filter, and 20 µL of the resulting solution was subjected to HPLC analysis. The final concentration of loganin in the extracts was calculated by using the linear equation for the calibration curve.

Chromatographic Conditions:  HPLC analysis of the extracts was performed on HPLC Jasco, PU-1580, UV detector Jasco UV -1575, column C18 HiQ sil column-250 mm  × 4.6 mm i.d. Samples were injected by using a Rheodyne injector fitted with a 20 µL fixed loop. Standard and sample solutions were filtered before injection. Determination of Loganin was carried out with the mobile phase composed of acetonitrile: water with 0.5% OPA (16:84) at wavelength 236 nm at a flow rate of 1.0 mL/min 7.

RESULTS AND DISCUSSION: Studies of loganin have reported that its structure plays an important role in the biosynthesis of secoiridoids and indole alkaloids. The objective of the study was to develop a rapid and convenient method for isolation of loganin from Nux vomica fruits. A literature survey has revealed that efforts have been made previously to isolate loganin from pulp and seeds of Nux vomica fruits which involved column chromatography, however, the yield obtained was very low and it was tedious and time-consuming 8. The advantage of current method is to isolate loganin to obtain better yield, purity and in the shorter time. For extraction and isolation process, a simple solvent partitioning method was used. Partitioning with petroleum ether and chloroform removed all non polar and fatty substances from the extract, whereas ethyl acetate being polar extracted loganin leaving the water-soluble impurities in an aqueous layer. After concentrating this layer, precipitation of crude loganin was done using petroleum ether. As loganin is insoluble in petroleum ether, it precipitates out quickly, for further purification recrystallization was done with ethanol since it is less soluble in absolute alcohol.

Track 2: methanolic extract of the pulp of Nux vomica fruits. 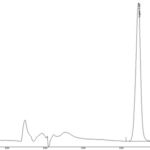 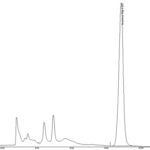 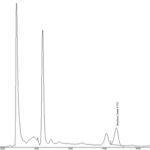 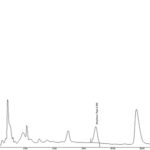 CONCLUSION: This isolation method developed involved easy solvent-solvent extraction technique followed by recrystallization to purify the compound. The reported method of isolation has shown good reproducibility in terms of purity and yield and can be further optimized for large scale production.