INTRODUCTION: Diabetes mellitus is characterized by raised blood glucose level which in turn is associated with an increase in the risk for microvascular and macrovascular disease 1. The overall worldwide epidemic of diabetes is anticipated to double by 2025 attacking to about 5% of the adult population 2. In the United States diabetes affects for more than 20 million people. According to the worldwide survey, more than 90% of diabetics belong to type II.

The death rate in people with diabetes is twice than that without diabetes 3. According to the worldwide survey, more than 90% of diabetics belong to type II. Medicinal plants are gaining extensive importance, as they are rich sources for natural anti-diabetic and antihyperlipidemic constituents, which lead to minimal side effects and inexpensive cost. By international plant name index (IPNI), Genus Andrographis comprises of 40 species out of them Andrographis serpyllifolia ((Family: Acanthaceae, Syn. Eriathera serpyllifolia, Andrographis orbiculat) is one of the most important plants. Its common names are Round leaf Kariyat, Aaku chandrika, Hasiru chedi, Hasiru havina gida, Kaasina sara, Kirta, kuram aku, Nela ber. This edible, railing and rooting herb is known for its traditional medicinal properties.

The herb is widely distributed throughout China, Deccan and Carnatic region of south India. Only a very few studies are reported in A. serpyllifolia for the presence of chemical constituents like serpyllin, apigenin 7,4’- dimethyl ether and tectochrysin compounds 4. Although their utility on bioactivity is not very clearly known, Andrographolide (AG) has been reported as one of the potential active components and is found to be responsible for several pharmacological and clinical activities 5. A. serpyllifolia is a prostrate growing herb whose plant extract inhibits  the growth of Bacillus subtilis, Staphylococcus aureus, Pseudomonas aeruginosa, Escherichia coli, Shigella boydii, Shigella  flexneri, Salmonella typhimurium, and Salmonella typhi 6-8 and it is used in the treatment of jaundice, digestive problems, snake bites, fever, cancer, inflammation, wound, 9 hypolipidemia 10. This investigation has been designed to evaluate the antihyperlipidemic and anti-diabetic activity of leaves of Andrographis serpyllifolia in streptozotocin-induced diabetic rats.

Plant Materials and Extraction: The leaves of Andrographis serpyllifolia were collected from different localities of Tirupati (Chittoor district, Andhra Pradesh, India) and authenticated by Dr. Madhava Chetty, Associate Professor, Department of Botany, Sri Venkateshwara University, Tirupathi-517 502, Andhra Pradesh, India. A voucher specimen ((Herbarium Accession No. 136) was deposited in the college herbarium. The leaves were shade dried, powdered and moved through sieve no. 60. The powdered material was extracted with 60% ethanol at 60 ºC on a water bath for 3 h using soxhlet extractor and filtered, concentrated on rotavapor (Buchi, USA) at 40 ºC to get an aqueous extract and stored in a desiccator.

Animals: Wistar rats (250-300 g) of either sex were procured from the animal house of the National Laboratory Animal Centre, Lucknow, India. The rats were accommodated in polypropylene cages at standard laboratory conditions of temperature (23 ± 2 ºC), humidity (50-55%), light dark cycles (12 h: 12 h), standard rat pellet feed (Hindustan Lever Ltd.,) and water ad libitum. They were acclimatized for 7 days before the experiment. The experimental works were performed by the guide for the care and use of laboratory animals, as approved and promoted by the Institutional Animal Care Committee, CPCSEA, India (Reg. No. 1732/GO/Re/S/13/ CPCSEA).

Acute Oral Toxicity Study: The acute oral toxicity study of plant extract of Andrographis serpyllifolia was performed on 24 h fasted rats by single dose administration each of 2000 and 4000 mg kg-1 (p.o.) according to the OECD guidelines 425. The toxicity signs and symptoms or any abnormalities associated with the extract administration were observed at 0, 30, 60, 120, 180 and 240 min and then once a day for the next 14 days. The number of rats that survived was recorded at the end of the study period.

Group IV, V and VI: Received aqueous, alcoholic, and hydroalcoholic extracts at a dose of 100 mg kg-1 each to assess the effect of extracts on blood glucose levels. Blood samples were withdrawn from retro-orbital plexus at intervals of 0, 30, 90 and 150 min for glucose estimation.

Statistical Analysis: Results were expressed as mean ± SEM. The significance of data was evaluated by graph pad in stat version 3.2. P value of analysis less than 0.05 was considered to be statistically significant.

Acute Oral Toxicity Study: The extract of Andrographis serpyllifolia found to be safe up to 4000 mg kg-1 (p.o.) with no toxic signs such as anorexia, depression, lethargy, jaundice, dermatitis and also, no mortality happened throughout the examination during the 14 days observation period. So, the extract was safe for long term administration.

TABLE 4: EFFECT OF ANDROGRAPHIS SERPYLLIFOLIA ON AST, ALT, AND ALP

Effect of Extract on Body Weight: Normal rats have shown an increase in body weight on 15th day (9.36%).

This indicates Andrographis serpyllifolia should be employed with alternatives like diet or hypoglycemic agents for diabetes control. Glibenclamide, a sulfonylurea derivative, elicited anti-diabetic activity by stimulating β-cells of the pancreas. Mechanisms related to in vitro studies were crucial to assess the mode of action. Hyperglycemia produced is accompanied by an increase in serum triglycerides, total cholesterol, low-density lipoproteins and the decrease in high-density lipoproteins.

Administration of ASHAE and ASAE normalized blood glucose levels along with restoration of serum triglycerides and cholesterol levels. Hence both extracts were considered to possess anti-diabetic activity and antihyperlipidemic activity. Anti-diabetic activity elicited might be related to the existence of active alkaloidal constituents; aporphine and berberine 9. Aporphine produced anti-diabetic effect by inhibiting intestinal glucose uptake 13.

In the diabetic control group, the typical loss of body weight is probably because of impairment in insulin action in the conversion of glucose into glycogen and catabolism of fats 16. Treatment with extracts (ASAE & ASHAE) substantially prevented loss of body weight due to the reversal of gluconeogenesis or release of insulin. Extracts treated groups increased glycogen content might be due to decreased endogenous glucose output from the liver. Derangements in metabolic processes during the progression are frequently associated with alteration in serum enzyme activities. Hence the estimation of serum enzymes has become prominent in diabetes. In diabetes, the increased amino acids; which tend to be active in the absence of insulin were responsible for the increased formation of gluconeogenesis and ketogenesis 17. ASAE & ASHAE have shown a reduction in the level of AST, ALT, and ALP which might be by inhibiting gluconeogenesis process.

Phytochemical and HPTLC analysis of the extract of Andrographis serpyllifolia was carried out to standardize the extract, using quercetin and rutin as marker components. Quercetin has been reported to prevent and protect against streptozotocin-induced oxidative stress and β-cell damage in rat pancreas 18. Rutin also exhibited protection against streptozotocin-induced diabetes by inhibiting inflammatory cytokines and improving antioxidant 19. Thus, the significant anti-diabetic and antihyperlipidemic activity of the leaves of Andrographis serpyllifolia may be attributed partially due to the presence of quercetin and rutin, although other compounds, as yet unidentified, probably also contribute Fig. 2. 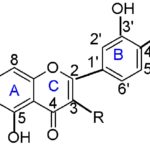 ACKNOWLEDGEMENT: Authors are thankful to the Director, CSIR-National Botanical Research Institute, Lucknow, India for providing necessary facilities. SSG and LA are grateful to the Department of Science & Technology (DST), Ministry of Science and Technology, New Delhi for providing DST-INSPIRE fellowship.