RHOIFOLIN: A REVIEW OF SOURCES AND BIOLOGICAL ACTIVITIES

RHOIFOLIN: A REVIEW OF SOURCES AND BIOLOGICAL ACTIVITIES

ABSTRACT: Flavonoids are common plant constituents used extensively in phytomedicine to treat a wide range of diseases. Many pharmacological pieces of evidence suggest that flavonoids may play an important role in the decreased risk of chronic diseases associated with a diet rich in plant-derived foods. Therefore, this article focuses on the chemistry, distribution and pharmacological properties of rhoifolin as one of the common and important flavonoids in the plant kingdom. This flavonoid has also been found in several dietary sources such as bitter orange, bergamot, grapefruit, lemon, lupinus, lablab beans, tomatoes, artichoke, bananas, and grapes. Preclinical studies have shown that rhoifolin possesses a variety of significant biological activities including antioxidant, anti-inflammatory, antimicrobial, hepatoprotective and anticancer effects. The literature search was conducted using electronic databases (e.g., Medline, Pubmed, Academic Journals and Springer Link), general web searches were also undertaken using Google applying some related search, journals and scientific theses. The bibliographies of papers relating to the review subject were also searched for further relevant references.

INTRODUCTION: Medicinal plants are well-known biosynthetic laboratories of bioactive substances, thus they can magically provide us with the key to our awful health problems in life. Flavonoids constitute a large group of plant secondary metabolites that enjoy a widespread accumulation throughout the plant kingdom and are commonly found in fruits, vegetables and certain beverages 1. Chemically, flavonoids are polyphenolic molecules characterized by a diphenylpropane structure (C6-C3-C6) and are found in plants both in a free form and as glycosides.

During the last decade, flavonoids attracted extensive phytochemical attention and considerable biological interest due to their wide range of pharmacological activities and potentially beneficial effects on human health. They have been reported to have antiviral, anti-allergic, antiplatelet, anti-inflammatory, anti-tumor and antioxidant activities. Recent studies also support a protective effect of flavonoids consumption in cardiovascular diseases and cancer 2.

Apigenin is one of the most common flavonoids present in edible plants and in those used in traditional medicine to treat a wide variety of pathologies. This flavone and its glycosides are widely distributed in the plant kingdom; they are found in many plant families, e.g. Apiaceae, Asteraceae, Fabaceae, Lamiaceae, Malvaceae and Rutaceae 3. To date, a huge number of apigenin glycosides have been isolated and identified. Many of them were reported to be effective in the pathogenesis of the majority of diseases 4. Rhoifolin or rhoifoloside is a well-known tri-substituted flavone belongs to the apigenin family. This molecule was obtained for the first time from the fresh leaves of Rhus succedanea in 1952 5. Several studies have shown that this flavone possesses a variety of pharmacological activities. Accordingly, this work highlights the distribution, chemical, physical, chromatographic and spectral properties as well as the biological effects of rhoifolin.

Chemical, Physical, Chromatographic and Spectral Properties: Chemically, rhoifolin is apigenin 7-O-β-neohesperidose Fig. 1 with the chemical formula C27H30O14 and the molecular weight 578.53 (exact mass: 578.1636) 3. It is usually isolated as a yellow amorphous powder or yellow needles (melting at 245-253 °C) after crystallization from methanol or 50% methanol 6, 8. Rhoifolin is soluble in methanol, hot ethanol and water (water solubility is 2.55 g/L), sparingly soluble in ethyl acetate and cold ethanol and insoluble in n-hexane and chloroform 9. It shows brown or dark purple fluorescence under UV light (254 nm) that turns to yellow upon exposure to ammonia vapors or spraying with 5% aluminum chloride reagent, in addition to yellowish brown color after spraying with 10% sulphuric acid reagent 8. Different solvent systems can be used for TLC analysis or separation of rhoifolin on silica gel e.g. ethyl acetate-methanol (8:1) [Rf 0.25], ethyl acetate-methanol (8:2) [Rf 0.625], chloroform-methanol (8:2) [Rf 0.36] butanol-acetic acid-water (4:1:1) [Rf 0.53] 6, 9. [α]D29 −110.0° (c, 0.21 in methanol) 6 and in another source −160.0° (methanol) 10.

In another work, small differences ranging from ~ 0.2-0.8 ppm were observed for some carbon signals of the sugar moiety in the same solvent 8. NMR data of rhoifolin were also recorded in CD3OD by Yadav et al. 11 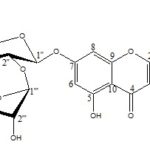 Considerable amounts (up to g/kg) of rhoifolin are also available in different organs of Chorisia spp. 6. Table 1 compiles plant species that contain rhoifolin in alphabetical order.

Isolation of Rhoifolin from Chorisia spp.: Different organs of Chorisia spp. (Bombacaceae) are a well-known and rich source of rhoifolin. Substantial amounts of this glycoside can be directly obtained from the total alcoholic and aqueous extracts of these plants. Four Chorisia spp. growing in Argentina provided rhoifolin in different yields including C. insignis (0.5%), C. speciosa (0.27%), C. pubiflora (0.24%) and C. crispiflora (0.15%) 6. According to the method described by Coussio, 6 1 kg of fresh leaves of C. insignis was boiled for 15 min with 2.6 l of water, and the extract was filtered on hot. Rhoifolin was then crystallized on cooling the filtrate. Further purification was achieved by several recrystallization steps from 50% methanol to provide yellow needles sintering at 202-205 °C and melting at 245 °C 6.

In another work by Eldahshan, the air-dried powdered leaves of C. crispiflora (1kg) was extracted with 70% ethanol. The extract was then entirely dried and dissolved in a small amount of distilled water and partitioned with n-hexane, ethyl acetate, and butanol, successively. The aqueous residue was dried and extracted with methanol at 40 ºC. The methanol extract upon concentration yielded yellow crystals of rhoifolin (8.3 g) that was purified by further crystallization 7.

HPLC Analysis and Quantification of Rhoifolin: In a study by Scordino et al. to investigate the identity and relative distribution of flavonoids and furocoumarins in pulp and peel tissues of the unripe Citrus myrtifolia by HPLC/PDA/ESI/MS-MS, rhoifolin was identified and quantified as 0.4% in the pulp and 1.6% in the peel. It also showed retention time of 40.0 min in HPLC analysis using a binary gradient of 0.3% formic acid in water and 0.3% formic acid in acetonitrile on an analytical column (Luna C18 250 × 4.6 mm, 5 μm i.d. (Phenomenex)) and photodiode-array detector 12.

On the other hand, a method for determining flavonoids in human plasma was presented for application to pharmacokinetic studies of rhoifolin. Isocratic reversed-phase HPLC was used with genistin as an internal standard and solid-phase extraction using a Sep-Pak C18 cartridge. A mobile phase of acetonitrile-0.1M ammonium acetate solution (20:80 v/v) was used 59.

In another work, an LC method was developed for quantitation of rhoifolin in Uraria picta. Rhoifolin showed a retention time of 14.74 min in the isocratic RP-LC method using a C18 column and a mobile phase of acetonitrile-water containing 1.0% trifluoroacetic acid (TFA) (20:80 v/v). A flow rate of 1.0 ml min-1 and column temperature at 30 °C were maintained throughout the run. The quantitation was performed at 265 nm 11.

Anti-inflammatory Activity: In a study by Eldahshan and Azab, rhoifolin was shown to possess potent anti-inflammatory activity at low doses. It caused a time- and reverse the dose-dependent reduction of carrageenan-induced rat paw edema. Following 4 hr of treatment, rhoifolin at doses of 2.5, 25 and 250 mg/kg caused a significant inhibition of rat paw edema volume by 14, 25 and 45%, respectively in comparison to the control group (74%). In addition to significantly abrogating prostaglandin E2 level, increasing doses of rhoifolin significantly diminished the TNF-α release in the inflammatory exudates. In the same animal model, rhoifolin increased the total antioxidant capacity in a reverse dose order, with the highest capacity obtained with the lowest dose tested 61.

Anti-diabetic Activity: In differentiated 3T3-L1 adipocytes, rhoifolin showed a dose-dependent insulin-mimetic effect within the concentration range 0.001-5 μM. At 0.5 μM, rhoifolin showed a nearly similar response to that of 10 nM of insulin on adiponectin secretion level. Furthermore, 5 μM of rhoifolin showed equal potential with 10nM of insulin to increase the phosphorylation of insulin receptor-β, in addition to its positive effect on GLUT4 translocation. These findings indicated that rhoifolin might be beneficial for diabetic complications through enhanced adiponectin secretion, tyrosine phosphorylation of insulin receptor-β and GLUT4 translocation 8.

Hepatoprotective Activity: Rhoifolin isolated from Chorisia crispiflora H.B.K. leaves showed 80.3% protection against CCl4-induced hepatotoxicity in mice at 20 mg/Kg. The liver showed its normal architecture and the serum levels of ALT and AST were kept close to normal 62. In another study, pretreatment of CCl4-treated rats with rhoifolin reduced the enhanced serum levels of hepatic enzymes. AST, ALT, TB, ALP and total serum protein were reduced by 60%, 59%, 51%, 39%, and 43%, respectively, indicating good anti-hepatotoxic activity. Also, the elevated level of lipid peroxidation products (TBARS), an indicator of oxidative stress in CCl4-intoxicated mice, was depressed by oral administration of rhoifolin at 20 mg/kg. The effect was comparable to that of silymarin 49.

Antihypertensive and Hemodynamic Effects: It was reported that rhoifolin exhibited important antihypertensive effects in conscious spontaneously hypertensive rats 3. In another study, the in-vitro ACE inhibitory activity of 17 flavonoids belonging to five structural subtypes were evaluated at two concentrations (500 and 100 µM) by a fluorimetric method. Among them, rhoifolin exhibited IC50 value of 183 µM. The catechol group of ring B, the double bond between C-2 and C-3 of ring C and the ketone group at C-4 of ring C were found to be important structural requirements for such activity 63.

On the other hand, the acute effects of luteolin, apiin and rhoifolin on the pulmonary vascular circuit in two experimental models of pulmonary hypertension, produced by hypoxia and by prostaglandin F2α (PGF2α) in anesthetized dogs, were studied in comparison with nifedipine. Rhoifolin at 5 mM/kg/i.v. produced no change in hypoxic pulmonary vasoconstriction but decreased cardiac output and aortic pressure. The response of pulmonary hypertension induced by PGF2α to flavonoids and nifedipine was nearly identical to that of hypoxia-induced pulmonary hypertension 64. In another comparative study of the hemodynamic effects of rhoifolin and vitexin in anesthetized dogs, rhoifolin caused a decrease of mean aortic pressure, of the arterial and pulmonary capillary pressure and heart rate 65.

Antimicrobial Activity: Rhoifolin exhibited certain inhibitory activity against Escherichia coli 28. This flavone was also found to cause 13% inhibition of coxsackievirus B3 infection with IC50 of 569.05 μM, whereas it reduced the viability of untreated cell cultures by 50% at >1000 μM in MTT assay with a calculated selective index of 1.8. Its antiviral mechanism may be due to the prevention of virus adsorption onto the cell surface, inhibition of protein kinase, viral DNA synthesis or virus-associated reverse transcriptase 66.

A composition comprising ligustroflavone, rhoifolin, and hyper in was found to potentially inhibit the influenza virus neuraminidase from hydrolyzing the sialic acid on the cell surface, prevent the virus from combining with the cell surface receptors and entering into the cells and reduce the generation of the virus within the cells, thus effectively and specifically inhibiting influenza virus replication. Besides, this composition overcomes the side reactions of the existing drugs 67.

Other Activities: In work to evaluate the inhibition of quinine 3-hydroxylation (CYP3A4 activity) in two human liver microsomes (HL1 and HL2) by grapefruit flavonoids, furanocoumarins and coumarins; rhoifolin did not inhibit the metabolism of quinine at 10 and 100 μM. Only a moderate inhibition (18% for HL1 and 26.1% for HL2) was observed at 200 μM 68. On the other hand, rhoifolin at 100 μmol/l inhibited CCl4- and FeSO4+cysteine-induced lipid peroxidation by 37.9% and 70.1%, respectively, with IC50= 66.1 μmol/l. Additionally, it exhibited inhibitory effects on AAPH-induced hemolysis of RBCs with IC50= 95.9 μmol/l indicating its potential antioxidant properties 3. It was also reported that rhoifolin possess xanthinoxidase inhibitory effect (12.9%) at 50 μg/ml 3.

CONCLUSION: Due to the growing demand for safe, natural pharmaceuticals to face the everyday challenging diseases and in light of the considerable interest in the chemistry and pharmacological properties of flavonoids, we have undertaken this review to summarize the chemistry, distribution and biological activities of rhoifolin. The available literature data have shown that this flavone enjoys a wide distribution in several plant families and can also be obtained in considerable amounts from some species, e.g. Citrus and Chorisia spp. Moreover, numerous preclinical studies have shown that rhoifolin possesses a wide range of biological activities and several possible mechanisms of action have been elucidated.

These pharmacological findings strongly recommend that rhoifolin could be developed into widely used remedies especially for its potent anti-inflammatory, hepatoprotective, insulin-mimetic actions and the highly selective cytotoxic effects. Hence, further investigation of the molecular mechanisms of these effects along with detailed clinical studies will be necessary for the future.