ABSTRACT: The present study was to investigate the antioxidant activity of aqueous bark extract of Spondias pinnata (Linn. f.) Kurz (Family: Anacardiaceae) in streptozotocin-induced diabetic rats. The antioxidant activity was evaluated by the activities of liver enzymes, antioxidant enzymes, and the extent of lipid peroxidation (LPO) in the liver of streptozotocin (STZ) ‑diabetic rats. S. pinnata extract decreased the LPO by 17%, activities of alanine aminotransferase, aspartate aminotransferase, and alkaline phosphatase decreased by 20%, 17% and 36% respectively (P<0.05). The liver reduced glutathione, activities of glutathione reductase, glutathione peroxidase, and glutathione S-transferase of plant extract treated diabetic rats were increased by 43%, 44%, 69% and 52% respectively (P<0.05). The light microscopic appearance of the liver tissue in S. pinnata treated rats has corroborated the biochemical results. The present investigation revealed that the bark extract of S. pinnata exerts significant in-vivo antioxidant activities in diabetic rats.

INTRODUCTION: Diabetes mellitus is a complex heterogeneous disorder affecting millions of people worldwide. The pathogenesis involves the development of insulin resistance accompanied by defective insulin secretion from pancreatic β cells resulting in hyperglycaemia 1. It has been proved experimentally and clinically that the oxidative stress is involved in the development and progression of diabetes mellitus 2. This is due to the deleterious invasion of free radicals or impaired antioxidant defense mechanisms 3. Increased lipid peroxidation and insulin resistance are linked with abnormal production of free radicals and the simultaneous decline of antioxidant defense mechanisms 4.

S. pinnata (Linn.f.) Kurz (Family: Anacardiaceae) is a deciduous tree distributed in Sri Lanka, India, and other South-East Asian countries. The bark of the tree is used for treating dysentery, muscular rheumatism and diabetes mellitus in traditional Ayurvedic medicine 6. The preliminary investigations by our group confirmed that the aqueous bark extract of S. pinnata at a dose of 1.00 g/kg was found to be the optimum effective anti-hyperglycemic dose in healthy (normoglycaemic) and diabetic rats 7, 8. Furthermore, the anti-hyperglycaemic, anti-hyperlipidaemic and β cell regenerative effects of S. pinnata (Linn.f.) Kurz. bark extract in streptozotocin-induced diabetic rats was reported previously by our group (9). The isolation of 24-methylene cycloartanone, stigma-4en-3one, lignoceric acid, β-sitosterol and its β-D-glucoside from S. pinnata have also described previously 10. The bark extract of S. pinnata was found to be toxicologically safe as a potent anti-hyperglycaemic agent in healthy Wistar rats 11. However, the effect of the S. pinnata bark extract at the optimum effective therapeutic dose on oxidative stress in diabetic rats was not previously reported. Therefore, the present study is aimed at investigating the potency of the S. pinnata bark extract to attenuate the oxidative stress in streptozotocin-induced diabetic rats.

Chemicals: All chemicals were of analytical grade and used without any purification.

Plant Material: Stem bark parts of S. pinnata were collected during May-June 2013 from the Southern region of Sri Lanka. Botanical identity was determined by the descriptions given by Jayaweera 6 and confirmed by comparing authentic samples at the National Herbarium, Royal Botanical Gardens, Peradeniya, Sri Lanka. A voucher specimen was preserved at the Department of Biochemistry, Faculty of Medicine, University of Ruhuna, Sri Lanka (Attanayake/2011/ 01).

Preparation of the Aqueous Plant Extract: The bark parts of S. pinnata were cut into small pieces, dried at 40 °C until a constant weight was reached and coarsely ground. Powdered plant material (50g) was dissolved in 400 ml of distilled water and refluxed for 4h. The mixture was strained, and the final volume was adjusted to 50 ml. A single dose of 1.00 g/kg (the optimum effective anti-hyperglycaemic dose) was administered orally to streptozotocin-induced diabetic rats.

Animals: Healthy adult male rats of Wistar strain (200 ± 25 g, body weight) were purchased from the Medical Research Institute (MRI), Sri Lanka and used to carry out the experiments. They were housed in standard environmental conditions at the animal house of Faculty of Medicine, the University of Ruhuna, Sri Lanka (Tem 25 ± 2 °C, relative humidity 55-65%   and 12 ± 1 h light/ dark cycle). Rats were fed with a standard diet (MRI rat formulae, Sri Lanka) with free access to water before and during the experiment. The rats were randomized into various groups and allowed to acclimatize for seven days under standard environmental conditions before commencing the experiments. The animals described as fasting were deprived of food and water for 12 h ad libitum.

All protocols used in this study were approved by the Ethics Committee of Faculty of Medicine, University of Ruhuna, Sri Lanka guided by the Council for International Organization of Medical Sciences (CIOMS) international guiding principles of biomedical research involving animals.

Development of Diabetes Mellitus in Wistar Rats: Streptozotocin dissolved in citrate buffer (0.1M, pH 4.4) at a dose of 65 mg/kg was administered intraperitoneally to rats fasted for 12 h. After that, rats have maintained on 5% D-glucose solution for the next 24 h. Rats were allowed to stabilize for three days, and on the 4th day, blood samples were drawn from the tail vein to determine the blood glucose concentration to confirm the development of diabetes mellitus. Rats with fasting blood glucose concentration of 12.0mmol/L or above were considered as hyperglycaemic and used for the experiments 12.

Experimental Design: Rats were randomly allotted to four groups of six animals per group. The group 1 and group 2 served as healthy and diabetic untreated (control) groups respectively. Group 3 and group 4 diabetic rats received the aqueous bark extract of S. pinnata at the optimum effective dose (1.00 g/kg) and glibenclamide (0.50 mg/kg) daily for 30 days respectively. At the end of the study (on the 30th day), blood was collected for the estimation of glycated hemoglobin (HbA1c) and serum activities of liver enzymes. The liver tissues of rats were excised for the estimation of the concentration of reduced glutathione, activities of antioxidant enzymes, and the extent of lipid peroxidation.

Assessment of Liver Histopathology: The liver tissues of test rats were fixed in 10% formalin. Tissues were processed routinely and embedded in paraffin wax. Sections were stained with hematoxylin and eosin.

Statistical Analysis: The replicates of each sample were used for statistical analysis, and the values were expressed as the mean ± standard deviation in the in-vitro study. The data were analyzed using analysis of variance (ANOVA) and the mean values for each group were compared by Dunnett’s multiple comparison tests in the in-vivo study. The level of significance was set at P<0.05.

RESULTS: As shown in Fig. 1, the percentage of HbA1C in S. pinnata extract treated rats were significantly lower than that in the diabetic control group (P<0.05). Table 1 and 2 shows the effect of the S. pinnata bark extract on liver enzymes and hepatic oxidative stress markers in healthy control and STZ-diabetic experimental rats. There was an elevation in the activities of ALT, AST, ALP (by 195%, 104%, 170%) and the concentration of MDA (by 199%), while the concentration of GSH, GR, GPx and GST (by 42%, 41%, 56%, 57% respectively) were decreased in STZ-diabetic control when compared with corresponding healthy control rats. Treatment of diabetic rats with the extract and glibenclamide decreased the activities of ALT (by 20%, 16%), AST (by 17%, 17%) and ALP (by 36%, 5%) compared to the corresponding diabetic control group (P<0.05). 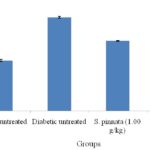 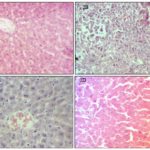 DISCUSSION: Oxidative stress is likely to be involved in the progression of diabetic complications 21. High levels of free radicals, due to increasing production and insufficiency of the antioxidant defense system, may lead to disruption of cellular function, oxidative damage to membranes, and enhance their susceptibility to lipid peroxidation 22.  In recent years, medicinal plant extracts with strong in-vivo antioxidative property have been the center of focus. It is believed that these plant extracts can prevent or protect tissues by direct antioxidative and anti-hyperglycaemic effects 23. The protection of hepatocyte cells from the effects of oxidative stress by treatment with vitamin E was evidenced in a recent study. Also, it has been shown that dietary supplementation with natural antioxidants such as vitamins C and E, melatonin and flavonoids attenuates the oxidative stress and diabetic state induced by STZ 24, 25. The present study evaluates the in-vivo antioxidant activity of S. pinnata extract in diabetic rats

Increased concentration of malonaldehyde, an end-product of lipid peroxidation, were found in the liver homogenates of streptozotocin-induced diabetic rats 26, 27. In this study, the increase confirms this finding, which indicates an overall increase in oxidative stress in diabetic rats. Treatment with S. pinnata bark extract at a dose of 1.00 g/kg suggests an amelioration of oxidative stress. Oxidative stress is the result of a redox imbalance between the generation of ROS and the compensatory response from the endogenous antioxidant network. The activities of glutathione reductase, glutathione peroxidase and glutathione S-transferase in diabetic rats showed a reduction in the concentrations of these enzymes which is similarly mentioned by other authors 28, 29. Hyperglycaemia results in the increased enzymatic conversion of glucose to the polyalcohol sorbitol with concomitant decreases in NADPH and glutathione 29, 30. The resulting loss of antioxidant reducing equivalents as glutathione results in enhanced sensitivity to oxidative stress associated with intracellular ROS.

In the present study, the concentration of glutathione in the liver homogenates of S. pinnata extract treated diabetic rats is increased. This increased GSH may be one of the factors responsible for the inhibition of lipid peroxidation in rats treated with S. pinnata extract.

The AST and ALT are found in large quantities in the liver where they play an important role in the metabolism of amino acids. However, as a result of cellular damage caused by reactive oxygen species or toxicity to the liver, these enzymes may leak from the hepatocytes into the circulation where their levels become elevated. Therefore, the elevated levels of AST and ALT are indicators of functional disturbance of liver cell membranes and cellular infiltrations. Also, ALP is membrane-bound, and its alteration is likely to affect the membrane permeability and produce derangements in the transport of metabolites. A significant increase in serum activities of AST, ALT, and ALP in STZ-diabetic rats is also consistent with published data 31. However, the values were significantly decreased in plant extract-treated diabetic rats. Accordingly, results revealed the extract of S. pinnata accelerated the regeneration in hepatocytes, thus decreased the leakage of ALT, AST, and ALP into systemic circulation.

Further, the liver histopathology matches with biochemical results. Even though there was a pronounced antihyperglycemic effect in diabetic rats treated with glibenclamide, we report that the extract of S. pinnata appeared to be more effective than glibenclamide in ameliorating the oxidative stress in diabetic rats. The anti-hyperglycemic action of glibenclamide is mediated through stimulating insulin secretion via β-cells in the pancreatic tissue 32, and the results suggest that there is no direct effect on oxidative stress in diabetic rats. This may further strengthen the direct in-vivo antioxidant activity of the plant extract.

ACKNOWLEDGEMENT: The financial assistance given by the University Grants Commission in Sri Lanka is greatly appreciated (UGC/ICD/CRF 2009/2/5). The authors wish to thank Dr. D.A.B.N. Gunarathne of the Department of Crop Science, Faculty of Agriculture, University of Ruhuna, Sri Lanka for the guidance given in statistical data analysis, Mrs. B.M.S. Malkanthie, Mr. G.H.J.M. Priyashantha and Mr. D.G.P. Pathmabandu Faculty of Medicine, University of Ruhuna, Sri Lanka for technical assistance.