ABSTRACT: The objective of this study was the extraction, recuperation, identification and bioactivity evaluation of the main bioactive compounds present in Chrysactinia mexicana A. Gray, polyphenolic compounds from aerial parts of Chrysactinia mexicana A. Gray were purified using a liquid chromatography column with ambulate XAD-16, first elution was made with distilled water, then ethanol was used to recover the phenolic fraction. These compounds were screened for antibacterial activity using agar diffusion method and antioxidant potential method was determined by ABTS•+, DPPH• and FRAP methods. Most bioactive compounds studied were effective against Klebsiella pneumoniae ATCC 13883, Escherichia coli ATCC 8739 and Salmonella enteric ATCC 7251, the compounds presented moderate inhibition against Staphylococcus aureus CDBB 1005. The polyphenolic profile was determined by HPLC/ESI/MS. The content of total hydrolyzable polyphenols (THP) after purification was 18.17 mgg -1, the content of total condensed total condensed polyphenols (TCP) determined after the extract purification was 18.25 mgg -1. The antioxidant activity of polyphenolic compounds of C. Mexicana (CMG) was determined by the IC50 of ABTS•+- scavenging capacity (86.07 µgml -1). Anthocyanins, flavonoids and organic acids among which Petunidin 3, 5-O diglucoside, quercetin 3-O-glucoside and chicoric acid were identified in this plant material.

INTRODUCTION: In Mexico, medicinal plants have been applied against different diseases such as gastrointestinal disorders, dysentery, and kidney pathologies 1.

Mexico possesses a great diversity of plant species 2, some of which are used as medicinal agents. There are about 25,000 registered plant species in this country, but about 3,000 are used with medicinal proposes 3.

Plants in the semi-arid Mexican zone are included in the medicinal group. Species as Euphorbia ant syphilitic (Candelilla) has antimicrobial activity against pathogen microorganisms 4, 5, Florensia cernua (hojasen) has antifungal activity 6, Larreatri dentata (gobernadora) has antimicrobial activity 7 and all of them have been used in the aforementioned diseases. One of the species that occur in the Semiarid Mexican zone is Chrysactinia mexicana A. Gray (Hierba de San Nicolás), this is a plant founded in the chihuahua, coahuila, durango, san luis potosi, tamaulipas 2. It is used in the treatment of respiratory diseases, muscle pain, stomach and skin infections, etc. 6 Besides the Chrysactinia mexicana A. Gray as biological activity against micro-organisms associated to gastrointestinal disorders 8 and against the diseases associated with microorganisms 9.

There is a lack of information about the bioactive compounds present in C. mexicana responsible for the different biological activities; for that reason is important the generation of scientific information about the identification of the main bioactive compounds and demonstrate its biological potential. Take together all this information, the objective of this work was the extraction, recovery, and identification of the main compounds present in C. mexicana as well as the evaluation of the antioxidant potential and antimicrobial activity against pathogen microorganisms of clinical importance.

Plant Material: C. Mexicana was collected from a semi-arid ecosystem in Saltillo, Mexico. The plant material was dehydrated at 60 °C by 48 h in an oven; then, the dehydrated material was ground through a 1-mm screen using a blade mill.

Extraction and Purification of C. mexicana Polyphenols: The C. mexicana polyphenols were extracted from dried plant material (20 g) with distilled water (100 ml) at 60 °C (m/v ratio 1:5). The mixture was placed in a heating oven at 60 °C to maintain the extraction temperature by 30 minutes. After extraction, the mixture was filtered through Whatman no. 41, membranes 10. The polyphenolic fraction was obtained using a liquid chromatography column with amberlite XAD-16, first elution was made with distilled water, and then ethanol was used to recover the phenolic fraction 4.

The experiment was performed in triplicate; the content of total hydrolyzable polyphenols was expressed as gallic acid equivalents.

DPPH Anti-oxidant Assay: DPPH-scavenging capacity assay was carried out according to the methodology proposed by Brand-Williams 12, slightly modified 13. A solution of a 1 mM DPPH reagent in 80% (v/v) methanol was stirred for 40 min. The absorbance of the solution was read at 517 nm. Then 50 µl of standard or sample was mixed with 2950 µl of DPPH reagent solution and incubated for 30 min in the dark covered with aluminum foil. Then absorbance was monitored at 517 nm after 30 min. The results were expressed as a half-maximal inhibitory concentration (IC50) according to the calibration curved prepared using polyphenolic compounds from CMG. The analysis was carried out by triplicate.

ABTS Antioxidant Assay: The ABTS-scavenging capacity assay was carried out according to the methodology described by Re et al. 14 A stock solution containing 7 mM ABTS solution and 2.45 mM of potassium persulfate (2:1) was rested from 12 to 16 h at room temperature and adjusted with absolute ethanol until reaching an absorbance of 0.700 ± 0.002 nm according to the original methodology. After that, the measuring cell was placed in the spectrophotometer, and 50 μl of sample and 950 μl of the above resulting solution were added. After 1 min, the absorbance was measured at 734 nm. The results were expressed as a half-maximal inhibitory concentration (IC50) according to the calibration curve prepared using polyphenolic compounds from C. mexicana. The analysis was carried out in triplicate.

Ferric Reducing Antioxidant Power (FRAP): The method of Gow-Chin and Hui-Yin 15 was used to determine the reduction power in the samples with slight modifications. Briefly, 50 μl of the sample at 500 mg ml-1 was mixed with 120 μl of phosphate buffer (0.1M, pH 6.6). Then, 120 μl of potassium ferricyanide was added to the mixture, which was homogenized and incubated at 50 °C for 20 min. Subsequently, 120 μl of trichloroacetic acid at 10% was incorporated into the incubated mixture, followed by 410 μl of distilled water and 100 μl of ferric chloride. Finally, the absorbance was measured at 700 nm, and results were expressed as gallic acid equivalents per milliliter (GAE ml-1) according to the calibration curve prepared with the same standard. The analysis was carried out in triplicate.

Inoculum: Inoculum for the assays was prepared by dilutions scraped cell, adjusted to McFarland scale 0.5; cell suspensions were diluted to 1×10 6 UFC ml for being used in the antimicrobial activity assays.

Determination of Anti-bacterial Activity: Antibacterial activity was carried out by the agar diffusion method (all strains were isolated and identified by the Laboratory of Natural Sciences, Faculty of Agronomy, Autonomous University of Nuevo Leon). Petri plates with Mueller-Hinton agar were used five equidistant sterile paper discs (10 mm) were placed in the solidified agar medium using sterile clamps. Different concentrations of purified C. mexicana polyphenols were prepared using water (0, 200, 400, 600, 800, and 1000 ppm) and placed on the paper discs (30 µl of each concentration), ethanol was used as a negative control. For the antibacterial activity against Staphylococcus aureus concentrations 0, 2000, 4000, 6000, 8000 and 10000 ppm were used too. The plates were kept at room temperature for 15 minutes and then incubated at 37 °C for 24 h. The inhibition zones formed around the discs were measured (mm); the antibacterial activity was determined by quintuplicate.

Determination of Total Hydrolyzable Polyphenols (THP): Polyphenols were detected in C. mexicana. The THP content after purification was 18.17 mg/g-1 (± 0.75) dry matter Fig. 1. Cassini et al., (2015) reported 218 mg/g -1 of THP in aqueous extracts of C. mexicana. THP content was lower in this study than that reported by Cassini et al., (2015), probably due to the sampling zone, as weather conditions, soil characteristics, and other biological factors affect the THP synthesis in the plant. 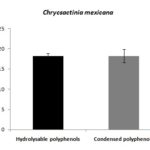 The THP content has previously been reported in C. mexicana, and this compound has been associated with different biological properties, such as pathogenic fungal inhibition agent. It has been reported that THP of C. mexicana have antifungal activity against Aspergillus flavus, as well as biological activity against gastrointestinal and respiratory disorders 6, 3. As far as we know, there is scarce information about the content of THP present in C. mexicana; therefore it is important to generate information about the extraction and quantification of these compounds in order to establish C. mexicana as an important THP source.

Determination of Total Condensed Polyphenols (TCP): The content of total condensed TCP determined after the extract purification was 18.25 mg/g-1 (± 1.64) dry matter; the results are shown in Fig. 1. Harborne et al., (1991) and Cardenas-Ortega et al., (2005) reported the TCP content in ethanolic extracts of C. mexicana. These compounds are relevant because they have been associated with antibacterial activity 6, 18, 19.

DPPH Antioxidant Assay, ABTS Antioxidant Assay and Ferric Reducing Antioxidant Power (FRAP): Radical scavenging activities were determined using DPPH, ABTS, and FRAP methods. The results are shown in Table 1. Antioxidant activity of C. mexicana polyphenols ranged from 9.21 to 75.71% and from 38.77 to 67.60% against DPPH and ABTS assay, respectively. In addition, values ranged, FRAP results ranged from 42.16 to 67.02% in Table 1. 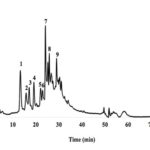 Among the classes of identified polyphenolic compounds in the sample, TCP was the most relevant. Anthocyanins, flavonoids, and organic acids were detected. The separated peaks by HPLC were identified by molecular weight using the Varian Work Station (version 2.0) database of the Autonomous University of Coahuila (FCQ-DIA-UA de C). The identified compounds are shown in Table 2.

Compounds 1, 2, 6, and 8 have been described as main components of C. mexicana with important biological activities. These compounds show effects against oxidative stress without affecting any basic function in biological models, not produce any damage in the hepatic function and not produce any significant change in the morphological tissue of organs examined of mice 16. The presence of these compounds in C. mexicana is relevant, due to this plant represents an option for the extraction and recovery of bioactive compounds with potential pharmacological applications as alternative medicinal agents. Compounds 5, 7, and 9 have an important antioxidant and biological potential. It has been reported that these compounds have anti-inflammatory, ant mutagenic and ant carcinogenic capacity 21, 22, 23. The consumer or application of these compounds may be protective against chronic diseases; therefore, it is important to improve the extraction, recovery and characterization strategies, andto explore other applications options 24, 25.

In the present study, the antibacterial activity of C. mexicana polyphenols was demonstrated. This is important due to C. mexicana represents an alternative for the treatment of diseases caused by pathogen microorganisms, therefore it is relevant to generate more information about extraction, recovery, and characterization of CMG polyphenols and then establish the strategies for their application.

CONCLUSION: C. mexicana represents an important source for the recovery of added value bioactive compounds with antioxidant and antibacterial properties against pathogenic bacteria. The phytochemical analysis of leaves of this plant material allowed the identification of nine compounds, wich may represent the full utilization of the plant material and this material may have application in the pharmacology and nutraceutical industries.

ACKNOWLEDGEMENT: The authors thank Conacyt for the scholarship assigned to this study.