In the present study, an indigenous herbal formulation containing the ethanolic extracts of rhizomes of Curcuma longa, fruits of Terminalia chebula, leaves of Azadirachta indica, leaves of Lawsonia inermis and leaves of Achyranthus asperus were prepared and studied for its wound healing activity in an ointment base by using in in-vivo excision wound model in albino wistar rats. The ointment was prepared with extracts in three different concentrations, i.e., 1%, 2% and 3% (w/w) and applied on excision wound twice daily for 16 days. Povidone-iodine was used as reference standard. It was observed that the wound healing contracting ability of the polyherbal extract in ointment base in different concentrations was significantly p<0.01 superior to that of the control (i.e., simple ointment treated group). The epithelialization time in the treated group was found to be less as compared to control. The most effective concentration of the polyherbal extract in ointment base was found to be 3% (w/w) for wound healing.

INTRODUCTION: The concept of developing drugs from plants used in the indigenous medical system is much older, while in some cases direct links between a local and biomedical use exist, in other cases the relationship is much more complex 1. Wounds and particularly chronic wounds are major concerns for the patient and clinician alike; chronic wounds affect a large number of patients and seriously reduce their quality of life. Current estimates indicate that nearly 6 million people suffer from chronic wounds worldwide. There are very few Indian studies on the epidemiology of chronic wounds.

The wound is a physical trauma where the skin is torn, cut burn or punctured due to disruption of normal anatomic structure and function 3. Wound often possesses problems in clinical practice. A lot of research has been envisaged to develop better healing agents. The rapidity of wound healing depends to a considerable extent on the contraction that begins a few days after injury and continues for several weeks 4. The use of traditional medicinal remedies and plants in the treatment of burns and wounds is an important aspect of health treatment and at the same time a way to reduce the financial burden. Several plants used as traditional healing remedies have been reported to treat skin disorders, including burn wounds. In the present study, an indigenous herbal formulation containing the ethanolic extracts of rhizomes of Curcuma longa, fruits of Terminalia chebula, leaves of Azadirachta indica, leaves of Lawsonia inermis and leaves of Achyranthus asperus was prepared and studied for its wound healing activity in an ointment base by using in in-vivo excision wound model in albino Wistar rats. This combination is used as these herbs are reported to have anti-inflammatory 5, immuno-modulatory 6, anti-microbial 7 and analgesic 8 activities respectively which are complementary to wound healing process.

The growing popularity of natural and herbal medications, easy availability of raw materials, cost-effectiveness and the paucity of reported adverse reaction, prompted us to formulate a polyherbal topical preparation and assess its wound healing ability.

Collection of Plant Materials: In the present study mature plant material rhizomes of Curcuma longa, fruits of Terminalia chebula, leaves of Azadirachta indica, Lawsonia inermis and Achyranthus asperus were collected locally, and their botanical identifications were authenticated by M. Venkaiah, Retd. Professor, Department of Botany, Andhra University, Andhra Pradesh, India by studying morphological features of leaf arrangement, bark, flower inflorescence arrangement, fruit, and seed. After authentication, plants were shade dried at room temperature until they become free from moisture. The Plant materials were powdered to 40 # mesh particle size and subjected to standardization with the different parameters.

Preparation of Extracts: The collected fresh rhizomes of Curcma longa, dry fruits of Terminalia chebula, and leaves of Azadirachta indica, Lawsonia inermis, and Achyranthus asperus were cleaned, washed with distilled water to remove any kind of dust particles and dried in shade separately. These were crushed in a grinder separately and the powders so obtained were passed through 14 mesh sieve to get the required coarse particles. Then the powders were packed separately in soxhlet assembly and defatted with petroleum ether (60-80 ºC). After defatting, extraction was carried out using 90% ethanol 9-13 for 72 h. The obtained liquid extracts were subjected to distillation and were concentrated on a water bath. The obtained residues were designed as crude extracts. Each of the extracts was weighed, kept in well labelled bottles and stored in a refrigerator separately for fur­ther study.

Preparation of Formulation: 1g, 2g and 3g formulation of polyherbal extracts were admixed with simple ointment base to obtain 1% (w/w), 2% (w/w) and 3% (w/w) respectively. Povidone-Iodine ointment USP (Betadine 5% w/w) was used as a standard drug for comparing wound healing potential of the extract 10.

Animals: Male albino wistar rats weighing 150 -180 g and approximately the same size with no prior drug treatment were used for the present in -vivo studies. These rats were procured from Mahaveer enterprises, Hyderabad and were acclimatized to laboratory condition at animal House, Yalamarty Pharmacy College, with room temperature 23 ± 5 ºC, 12 h light/dark cycle and relative humidity 55 ± 10% for 7 days before the experimental period. They were individually housed, maintained, in clean polypropylene cages and fed commercial pellet diet, along with water ad libitum.

The Institutional Animal Ethical Committee reviewed the animal protocol before the experiment. All rats were treated by the guideline for the care and use of laboratory animals (NIH publication no. 86-23, revised 1985) with the permission of Yalamarty pharmacy college Institute Animal Ethical Committee (1430/PO/a/ CPCSEA, 08-04-2011) having an approval number YLMV 001 dated on 04-08-2012.

Wound Evaluation: This model was used for the study of the rate of contraction of the wound. Initially, animals were anesthetized with slight vapor inhalation of di-ethyl ether. The rats were inflicted with excision wounds as described by Morton and Malone. An impression was made on the dorsal thoracic region 1 cm away from vertebral column and 5 cm away from the ear on the anesthetized rat. The dorsal fur of the animals was shaved with an electric clipper and the anticipated area of the wound to be created was outlined on the back of the animals with methylene blue using a circular stainless steel stencil.

A full thickness of the excision wound of circular area of 500 mm2 (12 mm diameter) and 2 mm depth was created along the markings using toothed forceps, scalpel and pointed scissors. Hemostasis was achieved by blotting the wound with a cotton swab soaked in normal saline. The entire wound was left open. All surgical procedures were performed under aseptic conditions. The treatment was done topically in all the groups twice a day for 16 days. The control group (Group-I) animals were treated with the vehicle (Simple ointment I.P.), the positive control (Group-II) animals were applied with 5% Povidone-Iodine (Betadene) ointment. Other groups, i.e., Test-1 (Group-III), Test-2 (Group-IV), Test-3 (Group-V) animals were treated with the prepared polyherbal ointment in 1%, 2%, 3% (w/w) concentrations respectively.

Measurement of the Wound Area and Epithelisation Time: Immediately after induction of the wound, all the animals in all groups were photographed, and the area of the wound was noted using a transparent OHP sheet and a permanent marker. Again the area of the wound was noted on days 4, 7, 10, 13 and 16 along with taking their photographs to assess the wound closure rate Fig. 1. Changes in wound area were calculated indicating the rate of wound contraction. The period of epithelisation was calculated as the number of days required for falling of the dead tissue remnants without any residual raw wound Table 2. The mean wound area of each treated group was compared with control at each time interval. The results are listed in Table 1.

Statistical Analysis: All the grouped data were statistically evaluated with PRISM/Version-4; April 3, 2003 software Hypothesis testing methods include one-way analysis of variance (ANOVA). P-values of less than 0.05 and 0.01 were considered to indicate statistical significance. All the results were expressed as mean ± SD for six animals in each group.

RESULTS AND DISCUSSIONS: Wound healing is a complex and dynamic process of restoring cellular structures and tissue layers in damaged tissue as closely as possible to its normal state. Wound contracture is a process that occurs throughout the healing process, commencing in the fibroblastic stage whereby the area of the wound undergoes shrinkage. It has 3 phases, inflammatory, proliferative, and maturational and is dependent upon the type and extent of damage, the general state of the host’s health, and the ability of the tissue to repair. The inflammatory is characterized by hemostasis and inflammation, followed by epithelization, angiogenesis, and collagen deposition in the proliferative phase. In the maturational phase; the final phase of wound healing, the wound undergoes contraction resulting in a smaller amount of apparent scar tissue.

In the present study, an indigenous polyherbal formulation in ointment base containing the ethanolic extracts of dried rhizomes of Curcuma longa, dried fruits of Terminalia chebula, dried leaves of Azadirachta indica, dried leaves of Lawsonia inermis and dried leaves of Achyranthys asperus was prepared and studied for its wound healing activity in in-vivo excision wound model in albino wistar rats.

TABLE 1: EFFECT OF THE FORMULATIONS ON % WOUND CLOSURE IN EXCISION WOUND MODE

TABLE 2: EFFECT OF TOPICAL APPLICATION OF POLYHERBAL MIXTURE IN OINTMENT BASE ON EPITHELIALIZATION TIME 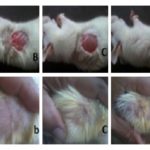 CONFLICT OF INTEREST STATEMENT: The authors declare that they have no conflict of interest.