PHYTOCHEMISTRY AND PHARMACOLOGICAL IMPORTANCE OF POLYGONUM VISCOSUM: A REVIEW

PHYTOCHEMISTRY AND PHARMACOLOGICAL IMPORTANCE OF POLYGONUM VISCOSUM: A REVIEW

ABSTRACT: Polygonum viscosum, belonging to the family Polygonaceae, is an annual herb which is highly distributed in Bangladesh, China, Nepal, Japan, and India. Like any other plant of the genus Polygonum, P. viscosum is significant from both phytochemical and pharmacological properties. Findings regarding the use of this plant in pain, fever, tumor, infection, inflammation, blood clots and so forth mark it as a valuable and noteworthy plant. According to our knowledge, there are very few studies presently available that document all the biological activities of P. viscosum. Hence, the following review gives a critical assessment of the literature to date and is the first review on the mentioned plant combining the limited research data found on Polygonum viscosum.

INTRODUCTION: Plants have been used as the traditional source of raw materials for medicines since the beginning of civilization of mankind. According to the World Health Organization, over 80% of the world’s population (about 4.3 billion people) is reliant on traditional plant-based systems of medicine for their primary health care. In this regard, it is found that plants and their products possess several pharmacological activities including analgesic, anticancer, anti-diabetic, immunomodulation, nervous system activation, antipyretic, hepato- protection, etc. 1 A large number of plants of medicinal importance have been explored by the scientists and researchers for the treatment of various ailments 2.

Most of the medicinal plants have specific compounds which are effective in the treatment or prevention of diseases. Regarding this medicinal plants have also been a reliable source for preparation of new drugs. In the present era, researchers are more dependent on medicinal plants for the discovery of new drugs with fewer side effects 3. Numerous species of genus Polygonum are utilized in traditional medicine therapy and reported to contain various pharmacological properties.

Furthermore, a potential medicinal plant under the family Polygonaceae is Polygonum viscosum. It is also known as “Sobuj Bishkatali” in Bengali and found widely in Nepal, China, Bangladesh, Japan and northeast part of India 4. Parts of this plant is known to be traditionally used for the treatment of diseases as such fever, inflammation, tumors, pain, infections, cancer and so on 5. Conferring to the knowledge up to this day, there are very limited studies available at the moment about the biological activities of P. viscosum 6.

The present study is an attempt to compile an up-to-date and comprehensive review of the plant Polygonum viscosum that mainly concentrates on its phytochemistry and pharmacological uses. 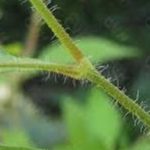 Chemical Constituents: Polygonum Viscosum has been reported to have many chemical constituents isolated from them.

TABLE 1: STRUCTURES OF SOME CHEMICAL CONSTITUENTS OF POLYGONUM VISCOSUM 8-12, 13, 14

Moreover, phytochemical evaluation of chloroform extract of roots of P. viscosum has yielded six compounds which were isolated for the first time from Polygonum viscosum. These compounds are stigmasterol, 7, 4 dimethyl quercetin, kaempferol, quercetin, myricetin, and scutellarin. The characterization of these compounds is done by spectroscopic methods and chemical analysis 14.

Anticholinergic Activity: Datta and his colleagues found that isolated compound quercetin 3-O-(6-feruloyl)-β-D- from the aerial parts of Polygonum viscosum indicated mild anti-cholinergic activity. This study was used to investigate the effect of test compounds on stomach muscle by taking acetylcholine as the spasmogen from guinea pigs the tissues were isolated, prepared accordingly the method described by Blattner et al., (1978). The tissue strips had been allowed to stabilize for 30 min before any compounds were added. On a UGO Basile model GEMINI 7070 2-channel polygraph contractions and relaxations were measured isometrically and displayed by Using force displacement transducer (UGO Basile, Italy). Spasmogen was applied to the tissue at 8 min intervals until constant responses were obtained 9.

Anti-oxidant Activity: P. viscosum has moderate antioxidant activity. Moghal et al., (2014) found this plant as a good source of total phenolic contents because of crude methanolic, pet. ether, carbon tetra chloride, and chloroform extract showed total phenolic contents of 12.35 μg of GAE/mg, 11.4 μg of GAE/mg, 19.83 μg of GAE/ mg and 21.55 μg of GAE/mg extracts respectively. Polyphenolic compounds such as tannins and flavonoids are present in this plant that yield antioxidant property. It was also found that antioxidant activities of different extracts of the leaves of P. viscosum increase with increasing concentrations 6.

Anthelmintic Activity: Majumder et al., (2014) found in a study that the extracts of Polygonum viscosum leaves possess significant anthelmintic activity in dose-dependent manner and the activity of the crude extract was equivalent with that of standard drugs. For this purpose, earthworms were tested with methanolic extracts of leaves of the plant followed by the determination of the paralysis and death of worms. On a note, adult earthworms were used to study the anthelmintic activity because they resemble with the intestinal roundworm parasites of a human being anatomically and physiologically and because of their easy availability 2.

Thrombolytic Activity: Thrombosis is a physical process of developing thrombus or blood clots in the human circulatory system. It can lead to heart attack, strokes, and other coronary conditions. As a result, anticoagulation therapy and thrombolytic agents or drugs are essential for the management of thrombosis patients. Apart from commonly used drugs for this purpose, some medicinal plants such as P. viscosum have been found to have significant thrombolytic properties by Moghal et al., 2014. A study showed that after treatments of a blood clot with 100 microliters of crude methanolic extract, petroleum ether extract of P. viscosum in the concentration of 20, 10, 5 mg/mL showed varying clot lysis, i.e., 12.49, 9.54, 6.69% and 17.07, 13.81, 7.92% respectively. This concluded that the extracts of this plant have significant thrombolytic activity compared to negative control. The thrombolytic activity can be an outcome of the fact that the extracts are good sources of alkaloids, tannins, flavonoids, and terpenoids which are believed to exert clot lysis 6.

CNS Depressant Activity: Datta and his colleagues found that viscoazucine and viscoazulone (Isolated from Polygonum viscosum) exhibited significant CNS depressant activity which was evident from a gradual decrease in movement of the treated mice. The decrease in movement with time after administration of the other test compounds i.e. viscosumic acid, viscozulenic acid and a flavonoid glycoside, quercetin-3-O- (6-feruloyl)-β-D-galactopyranoside indicated moderate CNS depressant activity of viscosumic acid and quercetin-3-O- (6-feruloyl)-β-D-galactopyranoside, and mild activity of viscozu-lenic acid at a dose of 50 mg/kg body weight 14.

The most noteworthy activity of polygosumic acid was against methicillin-resistant S. aureus, and the most potent activities were found against penicillin-resistant E. coli and S. aureus. Both viscozulenic acid methyl ester and viscoazucinic acid inhibit the growth of Bacillus cereus, Klebsiella aerogenes, Lactobacillus plantarum, Pseudomonas aeruginosa and Staphylococcus aureus due to their structural similarity 8.

CONCLUSION: This review illustrates a detailed description of Polygonum viscosum and its significance. This is one of the traditional medicinal plants on which numerous researches had been conducted. We can be benefitted from this plant to a great extent as it possesses important pharmacological activities.

ACKNOWLEDGEMENT: Authors are grateful to Jahangirnagar University, Department of Pharmacy, Savar, Dhaka, Bangladesh for providing necessary facility to carry out the study.

AUTHOR'S CONTRIBUTION: The review was conducted under the supervision of Pritesh Ranjan Dash (PRD) who also designed the study. The introduction was done by a collaboration of Safiqa Hossain (SH) and Anika Mahmood (AM). Serially, synonyms were retrieved by Zeba Raisa (ZR) along with AM, vernacular names and taxonomical classification were searched and collected from the internet by AM.

The botanical description was written by SH while the figures of the plant were founded by Nasib Bin Mahbub (NBM). Next, the chemical constituents were explored by ZR while the structures for them were done by NBM with the use of ChemDraw.