ABSTRACT: In the present study we screened four medicinal plants for the α-amylase inhibitory activity of each extracts phytochemicals, and it was determined based on the colorimetric assay using acarbose as a reference compound. The aqueous and ethanol extracts of the medicinal plants viz. Enicostemma littorale, Achyranthes aspera, Abutilon indicium, and Tridax procumbens were shown moderate α-amylase inhibitory activity against a reference, an account of that Achyranthes aspera shows potent activity towards remaining. Not only leaves but also the whole plant is used for comparative in-vitro study of inhibition of α- amylase activity.

The classification is based on clinical observations. Type 1 is characterized by the destruction of the pancreatic beta cell whereas type 2 is due to decreased insulin sensitivity (insulin resistance) 4. Alpha-amylase is distributed all over various organisms and shows diverse substrate specificities, while possessing a common topology formed from three domain, one of which being a typical alpha-beta barrel. Inhibition of the insect’s alpha-amylase is a proposed method of crop protection. On the other hand, inhibition of mammalian alpha-amylase is a proven therapeutic approach in diabetes and related disorders 5.

Widespread species of plants have been described in the scientific and popular literature as having hypoglycemic activity. Because of their perceived effectiveness, minimal side effects in clinical experience and relatively low costs, herbal drugs are prescribed widely even when their biologically active compounds are unknown 6, 7, 8. Acarbose currently marketed as a medicine in the treatment of diabetes, lowering postprandial peaks of glucose. However, acarbose is principally known as an alpha-glucosidase inhibitor, and cause side effects such as, abdominal distension, flatulence, meteorism, and possibly diarrhea.

Therefore it is attractive to find a substance that has strong inhibitory activity against α-glucosidase. But the minor effect on α-amylase activity. A problem that seems not to occur in the case of alpha-amylase inhibitors 5, 9.

Collection of Plants: Enicostemma littorale, Achyranthes aspera, Abutilon indicum, and Tridax procumbens was collected from Satpuda Mountain in the Maharashtra state of India and used freshly for extraction and isolation of their phytochemicals after grinding and both extracts stored in the refrigerator and used when needed 10, 11.

Ethanol Extract: The crushed plant material was placed in a thimble of soxhlet apparatus 7, 12, 13 100g and 50g for the whole plant and leaves respectively and extraction carried out by using ethanol as solvent (for 12-14 h). The extracts were filtered; ethanol was distilled off using a rotary evaporator to furnish the desired brownish-green residue, the yield of which was 3.9% and 2.63% for the whole plant and leaves respectively. The residues were dissolved in ethanol at 100, 200, and 500 µg/mL concentration 14.

Aqueous Extract: The 25g of crushed whole plant material was soaked in 25 ml, 50 ml, and 100 ml each in distilled water for 24 h. The extract was filtered by using a muslin cloth. The final volume was corrected to viz. 25 ml, 50 ml, and 100 ml by washing residue with distilled water (13-14) and used for the α-amylase inhibitory activity. The same procedure adopted for leaves.

Isolation of Phytochemicals: Whole fresh plant of 35g E. littoral was ground in a mixture and homogenized by methanol: water mixture 4:1 (10 X Wt.) for 5 min. Then it was filtered, and the filtrate was evaporated. 2M H2SO4 was added and extracted with chloroform yielded terpenoids.

Aqueous acid layer was made alkaline with NH4OH and then extracted with chloroform-methanol (3:1, 60 ml) twice, this extract afforded most of the alkaloids whereas remaining basic aqueous layer was evaporated and extracted with methanol yielded quaternary alkaloids. During purification of quaternary alkaloids, tannins were separated and analyzed 16. Similarly, phytochemicals of remaining all three plants isolated.

Dilution of Phytochemicals: The 10, 50 and 100 µg/mL concentrations of isolated phytochemicals were prepared by dilution with appropriate solvents of each plant

α-amylase Inhibitory Activity: The α-amylase inhibitory activity of each extract and phyto-chemicals was determined based on the colorimetric assay using acarbose as a reference compound (1-2). The starch solution (0.5% w/v) was obtained by boiling and stirring 0.25g of potato starch in 50 ml of deionized water for 15 min. The enzyme solution (0.5 unit/mL) was prepared by mixing 0.001g of α-amylase in 100 ml of 20 M sodium phosphate buffer (pH 6.9) containing 6.7mM sodium chloride.

Both extracts and isolated phytochemicals were dissolved in a respective solvent to give concentrations for aqueous extracts are 25 ml, 50 ml, and 100 ml, for ethanol extracts concentrations are 100 µg/mL, 200 µg/mL and 500 µg/mL. 10 µg/mL, 50 µg/mL and 100 µg/mL for isolated phytochemicals. The color reagent was a solution containing 96 mM 3, 5-dinitrosalicylic acid (20 mL), and 5.31 M sodium potassium tartrate in 2 M sodium hydroxide (8 ml) and deionized water (12 mL). 1 ml of each plant extract and 1 ml enzyme solution were mixed in a tube and incubated at 25°C for 30 min. To 1 ml of this mixture was added 1 ml of starch solution and the tube incubated at 25°C for 3 min. Then, 1 mlof the color reagent was added and the closed tube placed into an 85 °C water bath.

After 15 min, the reaction mixture was removed from the water bath and cooled after that, diluted with 9 ml distilled water and the absorbance value determined at 540 nm. Individual blanks were prepared for correcting the background absorbance. In this case, the color reagent solution was added before the addition of the starch solution and then the tube placed into the water bath. The other procedures were carried out as above. Controls were conducted in an identical fashion replacing plant extracts and isolated phytochemicals with 1 ml respective solvents. Acarbose solution (at the concentrations of 10 µg/mL, 50 µg/mL and 100 µg/mL) was used as positive control. The following formula assessed the inhibition percentage of α-amylase: 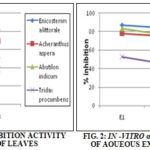 Aqueous extracts of leaves and whole plant of four plants as shown in Table 1. Both extracts showed activity at the higher concentration tested. Leaves of Enicostemma littorale exhibited grater activity i.e. it inhibits α-amylase activity by about 88.48%, 84.96%, and 81.67% at 25 ml, 50 ml and 100 ml concentrations respectively, followed by plant Achyranthes aspera and Abutilon indicum. Natural health products clearly indicated as a promising avenue for the prevention of chronic diseases. 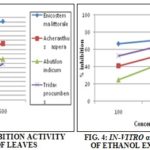 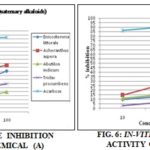 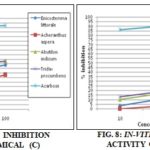