ABSTRACT: Phytochemicals are the best remedies to all kind of diseases and disorders throughout the world. There are a lot of plants, and its sources are playing a role as a heart, liver and kidney savers. In our present investigation, the famous fruit tree Annona squamosa (Annonaceae) leaves extract used for the hepatoprotective activity. The phytochemicals present in the aqueous leaves extracts were analyzed using preliminary biochemical analysis, and functional groups are characterized using Fourier Transform Infrared Spectrophotometer (FT-IR). The animals were divided into six groups, in that apart from the first group (normal control), five groups are induced with paracetamol (acetaminophen) with standard drug and two plant drug extracted by aqueous one is induced control. The increasing of enzymes and bilirubin, triglycerides and cholesterol and decreasing protein shows the liver damage. These levels are changed into normal range indicates efficiency of our plant drug. The histopathalogical results are also confirmed our hepatoprotective capability is good.

INTRODUCTION: There is a lot of plants have been used for the hepatoprotective activity by carbon tetrachloride, paracetamol or acetaminophen, ethanol, thioacetamide, rifampicin, isoniazid and pyrazinamide induced liver toxicity.  The plats have hepatoprotective capability against paracetamol-induced liver toxicity are flowers of Calotropis procera 1, fruit extract of 2, Rhazya stricta, Balanitis aegyptiaca and Haplophylum tuberculatum 3, Swertia chirata 4, vegetable and its leaves extracts of Brassica oleracea 5, Aerva lanata 6, Tabebuia rosea and Solanum pubescent 7,

For the past few decades, plants like Annona squamosa are used for the treatment of various applications like anti-diabetic, anti-inflammatory, hepatoprotective, antibacterial, anti-fungal and antitumor activity. With these points under consideration, the present study was carried out to investigate the hepatoprotective effect of aqueous leaves extracts of Annona squamosa on paracetamol-induced hepatotoxicity in rats. In this present investigation To isolate the aqueous extracts of leaf of Annona squamosa and to study their phytochemical constitution by FT-IR studies, and assess the hepatoprotective activity of the aqueous leaves extracts of Annona squamosa and by studying the parameters such as changes in the activity of AST, ALT, and the level of bilirubin, Alterations in the level of triglycerides, total protein and total cholesterol and histological changes in normal and experimental albino rats. 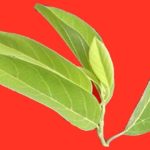 TABLE 1: BIOMEDICAL APPLICATIONS OF A. SQUAMOSA

Preparation of Extracts: The collected leaves of A. squamosa were washed thoroughly with running water to remove adherent impurities, chopped and air dried under shade for 7 days and then crushed into coarse powder. The dried leaves were pulverized in an electric grinder. The dried leaves were extracted in Soxhlet extractor with water separately for 8 h. The extracts were then reduced to a dark-colored molten mass by using rotary evaporator under reduced pressure. The extracts were used for phytochemical analysis and stored at 4 °C for further use.

Experimental Design: The rats were randomly divided into five groups of 6 animals each.

Biochemical Analysis: Animals of all the groups were sacrificed by cervical decapitation on the 8th day. Blood samples of each group were collected separately into sterilized dry centrifuge tubes and allowed to coagulate for 30 min at 37 ºC.  The clear serum obtained after centrifugation was used for the estimation of serum alanine aminotransferase, serum aspartate aminotransferase, serum bilirubin, serum protein, cholesterol, and triglycerides.

Histopathology: A portion of liver tissue in each group was fixed in 10% formalin (formalin diluted to 10% with normal saline) and processed for histopathology. After paraffin embedding, and block marking, a serial section of 5μm thicknesses were made, stained with hematoxylin and eosin and examined under the microscope.

Phytochemical Constituents of A. squamosa: The presence of phytochemicals such as alkaloids, glycoside, flavonoids, saponins, and phenolic compounds was confirmed by qualitative phytochemical analysis shown in Table 2. These are the key constituents used as liver savers. Fig. 2 and Table 3 show the FT-IR spectrum of the A. squamosa leaves aqueous extract. In that, the functions groups such as phenol and methanol, benzene, ethylamine, nitromethane, methyl formate, and diethyl ether, diethyl ether and methyl formate were confirmed by its absorption ranges and types of vibration.

TABLE 2: PHYTOCHEMICAL CONSTITUENTS OF A. SQUAMOSA

Hepatoprotective Activity of Annona squamosa: Plants are major pharmaceutical resources having a lot of applications like antidiabetic 24, kidney savers and nephroprotective agents 25, 26, 27 hepato-protective materials 5, 13 heart medicines like cardioprotective agents 28, 29 antimicrobials such as antibacterials and antifungal agents against disease-causing infectious pathogens 30. And finally, the plants are playing important role in nanoparticles synthesis nowadays 31, 32, 33, 34. The effects of aqueous extract of A. squamosa on serum enzymes were studied, and the results were given in Fig. 3 and Table 3. It is well known that acetaminophen is used as a hepatotoxic agent on various animals.

Administration of acetaminophen to rats produced hepatotoxicity showed by a significant increase in the serum enzymes levels of ALT, AST and serum triglycerides and cholesterol in comparison to control group. The aqueous extract of A. squamosa showed a significant decrease in the serum enzymes ALT, AST and ALP but also significantly improved the triglycerides and cholesterol level when compared to the acetaminophen compared to control groups. There were raise in GSH content of liver after treatment with A. squamosa aqueous extract Standard drug, silymarin (25 mg/kg) also exhibited similar results significantly. 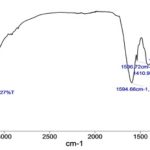 TABLE 3A: FT-IR OF A. SQUAMOSA

TABLE 3B: CHANGES IN THE ACTIVITY OF AST AND ALT IN EXPERIMENTAL ANIMALS 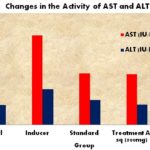 FIG. 3: CHANGES IN THE ACTIVITY OF AST AND ALT IN EXPERIMENTAL ANIMALS

Table 4 and Fig. 4 present the changes in the level of serum total bilirubin, protein, Cholesterol and Triglycerides. Here, paracetamol-induced liver damage was characterized by increased level of bilirubin, Cholesterol, and Triglycerides and they return to normal level after 7 days of treatment with aqueous extracts from A. squamosa leaf. Hyperlipidemia is the most common disorder in liver diseases. Damaging of liver cells by paracetamol may cause the hyperlipidemia clearly shown in total cholesterol and triglycerides level. These higher levels reduced near the normal and standard level which indicates our plant capability against liver damage. The liver is known to play an important role in the serum protein synthesis, is the source of plasma albumin and fibrinogen and also a and b-globulin.

The liver is also concerned with the synthesis of g-globulin. The serum albumin level is low in liver damage conditions. The paracetamol was damaging the hepatic cells its due to hypoalbuminaemia. 28. The aqueous extracts from A. squamosa leaves may increase the protein levels in the serum. It indicates that the protection of hepatic cells from paracetamol induction.

TABLE 4: CHANGES IN THE LEVELS OF SERUM BILIRUBIN, TOTAL PROTEIN, CHOLESTEROL AND TRIGLYCERIDES IN CONTROL AND EXPERIMENTAL RATS 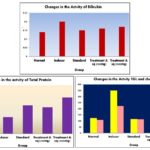 Fig. 4: Changes in the activity of Bilirubin, total protein, TGL and cholesterol

Histopathology: The hepatoprotective effect of the A. squamosa aqueous extract against paracetamol-induced injury was confirmed by histopathological examination. The hepatocyte damage caused by paracetamol (acetaminophen) is shown in histopathological studies of liver Fig. 5B. Administration of A. squamosa aqueous leaves extract along with acetaminophen excreted significant protection against toxicity and showed normal appearance in the liver. The effect of standard drug silymarin and plant extracts on hepatocytes clearly showed the protective effects of aqueous extracts of A. squamosa against paracetamol-induced liver damage Fig. 5C-5E. 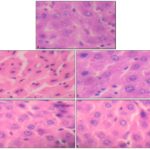 CONCLUSION: A. squamosa fruits are very popular for their taste. In traditionally A. squamosa leaves are used for various biomedical activities. The hepatoprotective effects of A. squamosa leave aqueous extract investigated under acetaminophen-induced hepatotoxicity in male albino rats. The treatment of A. squamosa suppressed the increase of SGOT (Serum glutamate oxaloacetate trans-aminase) and SGPT (Serum glutamate pyruvate transaminase) in the serum of acetaminophen injured rats. When compared with the normal and inducer the significant changes were identified in the activity of the total protein, total bilirubin, total cholesterol, and triglycerides indicates the A. squamosa have a lot of phytochemicals which protect the hepatic injury. In some cases, the A. squamosa leaves extracts are have a good result when compared to standard drug silymarin. Finally, we conclude that our plant is the best remedy for our liver. It has a lot of pharmacological properties for its phytochemicals.

ACKNOWLEDGEMENT: The Authors would like to thank Dr. A. Mohamed sadiq, Principal, APCAS, Kalavai for his support and valuable suggestions.