INTRODUCTION: Medicinal plants, as a source of remedies, are widely used as alternative therapeutic tools for the prevention or treatment of many diseases.

The recent studies have investigated that the antioxidant effect of plant products is mainly attributed to phenolic compounds such as flavonoids, phenolic acids, tannins, etc. 1, 2

Accumulation of free radicals can cause pathological conditions such as ischemia, asthma, arthritis, inflammation, neuro-degeneration, Parkinson’s diseases, mongolism, the aging process and perhaps dementia. Natural antioxidants have become the target of a great number of research studies in finding the sources of potentially safe, effective and cheap antioxidants 3. Herbal drugs containing free radical scavengers are known for their therapeutic activity 4. In the present study, the phytochemical screening and antioxidant activities of two medicinally important herbs Justicia tranquebariensis and Bauhinia racemosa were taken to identify its phytoconstituents and radical scavenging capacity.

Justicia tranquebariensis (Acanthaceae) is a small shrub, which is widely distributed in the southern parts of India. Some species of the genus Justicia have been used in the traditional system of medicine for the treatment of fever, 5 pain 6, inflammation 7, diabetes 8, diarrhea 9 and liver diseases 10. The juice of small of small and somewhat fleshy leaves of this species of Justicia is considered by the natives of India as cooling and aperients, and is prescribed for the children in smallpox, in the doses of a table-spoonful or two, twice daily; bruised leaves are also applied to blows and other external injuries 11. As far as our literature survey could ascertain, no information was available on the protective and curative effect of Justicia tranquebariensis leaf extract. Therefore this study aimed to investigate the protective and curative effect of Justicia tranquebariensis from India.

Bauhinia racemosa Lam. (Caesalpiniaceae) is a small bushy tree with drooping branches. The leaves are green and broader than long. The flowers are white or pale yellow, terminal or leaf-opposed racemes 12, 13, 14. A new tetracycliclupeol, betulin, β-sitosterol, and tetracyclic 2, 2-dimethylchroman have been isolated from the roots 15, 16. The seed contains flavonoids, crude protein, and lipid 17, 18. A methanolic extract of the stem and bark are used as an anti-inflammatory, analgesic and antipyretic 19. A methanolic extract of the flower buds is used in the treatment of peptic ulcer 20. The whole plant is used as veterinary medicine in central India.

Chemicals and Reagents: DPPH (2, 2-diphenyl-1-picrylhydrazyl) and all other chemicals and reagents used were of the highest analytical grade commercially available 21.

Phytochemical Tests: Preliminary phytochemical tests were carried out for aqueous extract of A. deliciosa to identify different phytoconstituents 21.

Test for Carbohydrates: To 2 ml of plant extract, 1 ml of Molisch’s reagent and few drops of concentrated sulphuric acid were added. Presence of purple or reddish color indicates the presence of carbohydrates 22.

Test for Tannins: To 1 ml of plant extract, 2 ml of 5% ferric chloride was added. Formation of dark blue or greenish black indicates the presence of tannins 23.

Test for Saponins: To 2 ml of plant extract, 2 ml of distilled water was added and shaken in a graduated cylinder for 15 min lengthwise. Formation of a 1 cm layer of foam indicates the presence of saponins 24.

Test for Flavonoids: To 2 ml of plant extract, 1 ml of 2N sodium hydroxide was added. Presence of yellow color indicates the presence of flavonoids 25.

Test for Alkaloids: To 2 ml of plant extract, 2 ml of concentrated hydrochloric acid was added. Then few drops of Mayer’s reagent were added. Presence of green color or white precipitate indicates the presence of alkaloids 26.

Test for Quinines: To 1 ml of extract, 1 ml of concentrated sulphuric acid was added. Formation of red color indicates the presence of quinones 27.

Test for Glycosides: To 2 ml of plant extract, 3 ml of chloroform and 10% ammonia solution was added. Formation of pink color indicates the presence of glycosides 28.

Test for Cardiac Glycosides: To 0.5 ml of extract, 2 ml of glacial acetic acid and few drops of 5% ferric chloride were added. This was under layered with 1 ml of concentrated sulphuric acid. Formation of the brown ring at the interface indicates the presence of cardiac glycosides 25.

Test for Terpenoids: To 0.5 ml of extract, 2 ml of chloroform was added and concentrated sulphuric acid was added carefully. Formation of red-brown color at the interface indicates the presence of terpenoids 25.

Test for Phenols: To 1 ml of the extract, 2 ml of distilled water followed by a few drops of 10% ferric chloride was added. Formation of blue or green color indicates the presence of phenols 27.

Test for Coumarins: To 1 ml of extract, 1 ml of 10% NaOH was added. Formation of yellow color indicates the presence of coumarins 27.

Phlobatannins: To 1 ml of plant extract a few drops of 2% HCl was added the appearance of red color precipitate indicates the presence of phlobatannins 25.

Anthraquinones: To 1 ml of plant extract, a few drops of 10% ammonia solution were added, appearance pink color precipitate indicates the presence of anthraquinones 25.

Antioxidant Activity: The ability of the extracts to annihilate the DPPH radical (1, 1-diphenyl-2-picrylhydrazyl) was investigated by the method described by (Blois 1958). A stock solution of leaf extracts was prepared for the concentration of 1mg/ml. 100µg of each extract was added, at an equal volume, to a methanolic solution of DPPH (0.1mM). The reaction mixture is incubated for 30min at room temperature; the absorbance was recorded at 517 nm. The experiment was repeated for three times. BHT was used as standard controls. The annihilation activity of free radicals was calculated in % inhibition according to the following formula: 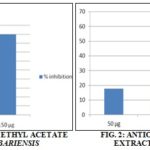 Concentration µg/ml, X-axis – concentration of the sample, Y-axis – the percentage of inhibition 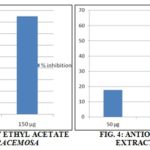 Concentration µg/ml, X-axis – concentration of the sample, Y-axis – the percentage of inhibition

DISCUSSION: The importance of medicinal values of plants has been accepted in the past few decades. Plants produce a very diverse group of secondary metabolites with antioxidant potential. Antioxidant blocks the action of the free radicals which have been implicated in the pathogenesis of many diseases and the aging process. The free radicals are governing the important biological processes which are necessary for the body. The free radicals are necessary but at the same time harmful for the body. Hence it has some mechanisms are minimized the free radical-induced damage. The enzymes involved in repairs, the damage caused by free radicals are superoxide dismutase, catalase, glutathione, peroxidase, and glutathione reductase 30, 31, 32.  In our study, hexane and methanol extract of Bauhinia racemosa showed positive for the presence of flavonoid, alkaloid, quinones, cardiac glycosides, terpenoids, coumarins steroids. Manohas et al., 33 reported that methanol and aqueous extracts showed positive for carbohydrates, glycosides, alkaloids, phytosterol, saponins, flavonoids, gums and mucilage, tannins, fixed oil, and fats.

CONCLUSION: Phytochemical screening of hexane and ethyl acetate extracts of Justicia tranquebariensis and Bauhinia racemosa had revealed the presence of flavonoids, alkaloids, cardiac glycosides, terpenoids, coumarins, steroids. From this study, it has been concluded that Justicia tranquebariensis extracts have shown significant antioxidant activity than Bauhinia racemosa. This plant might help prevent or slowing the process of diseases involved as a result of oxidative stress.