INTRODUCTION: Medicinal plants are of great importance to the health of individuals and communities. About 60-80% of world populations still rely on plant-based medicines 1. The medicinal value of these plants lies in some active chemical substances. The most important of these chemically active constituents of plants are alkaloid tannin, flavonoids and phenolics compound 2. There is an urgent need for an effective, less expensive means of treating serious and life-endangering bacterial infections 3.

Plant essential oils and solvent extracts have been used for many thousands of years, especially in food preservation, pharmaceuticals, alternative medicine and natural therapies 4.

Lantana camara L. is a flowering plant belonging to family Verbenaceae. L. camara is a popular ornamental garden plant and commonly known as wild sage or Lantana L. 5 Lantana camara L. has been used in many parts of the world to treat a wide variety of disorders 6. All parts of this plant have been used traditionally for several ailments. The leaves of this plant were used as an antitumeral, antibacterial, and antihypertensive agent, roots for the treatment of malaria, rheumatism, and skin rashes 7, 8. The study investigates the qualitative phytochemical screening (for both solvent extract and essential oil) and antibacterial activities (only for solvent extract) on three selected bacteria.

Solvent Extraction: Maceration method was used for this extraction. The dry leaf samples (300 gm) were extracted with petroleum ether and chloroform at 28 °C for two days. The extracted was filtered by using filter paper. The solvent was removed by rotatory evaporator under pressure for 20 min.  In the end, 15.5 gm and 13.18 gm solid crude extract were obtained for petroleum ether and chloroform respectively. The extracts were kept in the refrigerator. Both antibacterial activities and selected phytochemical analysis took place by following standard procedures. The essential oil was extracted for the phytochemical test.

Extraction of Essential Oil: Hydrodistillation was used for this extraction. Leaf of Lantana camara L. was collected and dried under shaded area. 300 gm of the dried one was taken in a round bottom flask, and enough amount of water was added to it. The extraction was continued until 3 h. The oil was purified from water by anhydrous sodium sulphute. The yield was calculated, and phytochemical screening was done by following standard procedures.

Test for Tannin: 0.5 gm of each extract was boiled in 10 ml of water in two test tubes and then filtered. A few drops of 0.1% ferric chloride was added and observed for color change, and the oil was also tested in a parallel way.

Test for Saponins: To 0.5 gm of the extract was added to 5 ml of distilled water in a test tube. The solution was shaken vigorously and observed for a stable, persistent froth. The frothing was mixed with 3 drops of olive oil and shaken vigorously after which it was observed for the formation of an emulsion and the observation was recorded. The oil was also analyzed similarly by standard procedure.

Alkaloid: 2 gm of the solvent extract was diluted to 16 ml with distilled water, boiled in a water bath and filtered. This was divided into two portions. Draggendorff’s reagent to the first and Hager’s reagent to the second and Observation was recorded. Standard procedure was also followed for the oil.

Test for Terpenoids: To 0.5 gm each of the solvents extracts, 2 ml of chloroform was added. Concentrated H2SO4 (3 ml) was carefully added; layers were formed and Observed for color changes. The oil was also analyzed for terpenoids by standard procedure.

Test for Steroids: To 1 gm of the extract, 2 ml of acetic anhydride was added with 2 ml H2SO4. The color changed was observed. The oil was also screened, and the result was compared with the solvent extract.

Test for Flavonoids: This compound was checked by Shinoda test and observation was recorded. The oil was analyzed in a parallel way.

Test for Phenol: 16 gm of the extract was taken and dissolved in 5 ml distilled water. This was treated with 5% ferric chloride solution. Change in color was recorded.

Test for Anthraquinone: 2 gm of the extract was boiled with 10 ml of distilled water and filtered. The filtrate was shaken with 5 ml of chloroform. The chloroform layer was pipette into another test tube, and 1 ml of dilute ammonia was added. The resulting solution was observed for color changes. The screening was also done for oil.

Glycosides: FeCl3 test: 0.8 gm of the extract was taken, and 2 drops of FeCl3 solution was added. The color change was observed. Standard procedure was followed for the oil.

Test for Carotenoids: 0.5 ml of the extract was taken, and 1 ml of H2SO4 was added to it. The color change was observed, and the presence of this compound was checked Table 1.

Flavonoids Glycosides: This test was performed by the ammonia test, and Shinoda test and observation was recorded.

Test for Carbohydrates: carbohydrate was screened by Molish test and Iodine test, and the result was recorded.

Antimicrobial Susceptibility testing of the Solvent Extract by Disk Diffusion Methods: The solvent extract was tested against gram positive and gram-negative bacteria by the disk diffusion method.

Preparation of Test Microorganisms: The activity of the solvent extract was tested towards 3 different bacteria: Those are Pseudomonas aeruginosa (Gram-negative), E. coli (Gram-negative), and Staphylococcus aureus (Gram-positive). Microorganism strains were employed for the determination of antibacterial activity. Microorganisms were provided by microbiology laboratory, faculty of veterinary medicine at Mekelle University.

Preparation of Mueller-Hinton Agar Medium: Mueller-Hinton agar was prepared from dehydrated base according to the manufacturer’s instructions. 38gm was dissolved in 100 ml distilled water. The medium was heated to dissolve completely. It was allowed to cool in a 50 °C water bath after Autoclaved. The freshly prepared and the cooling medium were poured into flat-bottomed petri dishes on a horizontal surface and gave a uniform depth of 4 mm and 60 ml of medium for plates with diameters of 90 was used. It was allowed to set at room temperature until the agar was solidified. In the end, it was incubated at 37 °C for 24 h to be ready for the susceptibility test.

Preparation of Concentration of Solvent Extract: Extracts were diluted and used at a concentration starting from 100% to an end dilution of 25% where 25 mg/ml in 10% cyclohexane to chloroform by the ratio of 70:30 respectively.

Preparation of Dried Filter Paper Discs: Whatman cat. no 3001-845, Whatman Ltd., England was used to prepare discs 6 mm in diameter, which was placed in a petri dish and sterilized in a hot air oven

Turbidity Standard for Inoculums Preparation: The inoculums density for a susceptibility test was standardized; a 0.5 McFarland standard was used.  The barium sulfate suspension was transferred in 6 ml solution into screw-cap tubes of the same size as those used diluting the bacterial inoculums and stored in the dark at room temperature. The barium sulfate turbidity standard was vigorously agitated on a mechanical vortex mixer before use, and a uniformly turbid appearance was formed.

Inoculation Procedure: The turbidity adjusted inoculums suspension was dipped with a sterile cotton swab. By pressing firmly against the inside wall of the tube just above the fluid level, the swab was rotated so as the excess of the liquid was removed. The swab was then streaked over the entire surface of the MA medium three times; the plate was rotated approximately 60 degrees after each application to ensure an even distribution of the inoculums. Finally, all-round the edge of the agar surface was swabbed.

Application of the Extract: After swabbing, a sterile cork borer was used to form a well in such a way that each hole was separated from the other by 20 mm. 80 mg of the plant extract was taken from both solvent extracts and four different concentrations (100% mg/ml, 75% mg/ml, 50% mg/ml, and 25% mg/ml) were prepared. The prepared solutions were applied in triplicate into the well using micropipette.

The dishes were then kept for 2hrs at environmental condition until the extracts were diffused into the medium and then incubated for 24h at 37 °C. Amoxicillin (0.1 mg/ml) was taken as positive and ethyl acetate as negative controls. The petri dishes were then taken out, and the inhibition zones were measured.

Statistical Analysis: The results in this study were represented as mean ±S.D. All the analysis assays were done in triplicate (n=3) for both treatment and control groups.

Qualitative Screening of Phytochemical Analysis of the Essential Oil and Solvents Extract from Lantana camara L. Leaf: Chemical test was carried out on the essential oil and solvent extracts using standard procedure to identify the constituents. This analysis for essential oil showed the presence of terpenoids and carbohydrate but negative test for the rest components Table 1. In a parallel way, solvent extracts were checked and gave a positive test for glycosides; alkaloid, flavonoids glycosides, carbohydrates, tannin, saponins, anthraquinone, terpenoids, phenol, and carotenoids. The results obtained were considered with review literature. The result obtained for solvent extract indicates the presence of glycosides, but the review literature which was done with other solvent indicates the absence of this compound 5. This difference might come from the type of extraction we used, a season in which sample was collected, genetic variation, the difference in temperature or nature of the solvent. The phytochemical analysis of essential oil, as well as solvent extract collected from Mekelle city, was consistency with the reported one by Patel J and his co-worker from India in 2011.

An Experimental Approach to Study the in-vitro Antimicrobial Activities: Antibacterial inhibition zone of solvent extract against three different bacteria, P. aeruginosa (Gram-negative), E. coli (Gram-negative) and S. aureus (Gram-positive) as shown in Table 2. The result obtained from the disc diffusion method of solvent extract indicates that E. coli and Staphylococcus aureus showed more inhibition than Pseudomonas aeruginosa Table 2. Staphylococcus aureus was highly susceptible to the petroleum ether than to the chloroform extract in all concentrations with a zone of inhibition from14.17±0.29 mm to17.7±0.2 mm.

TABLE 1: PHYTOCHEMICAL ANALYSES OF THE ESSENTIAL OIL AND SOLVENTS EXTRACT

+ = Present - = Absent none = did not identified before 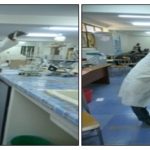 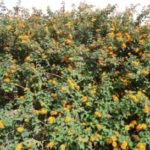 Pseudomonas aeruginosa had shown least susceptible to chloroform extract in all concentration with a zone of inhibition from 9 ± 0.21 to 11.3 ± 0.5. Generally, in all case, the result recorded revealed that solvent extracts of Lantana camara L. leaf showed antibacterial activity against all the bacterial strain tested. Those results are agreed with the research done in 2011 by Mary Kensav 9.

CONCLUSION: The results obtained by phyto-chemical screening as well as antibacterial activity revealed that lantana camara L. leaf has a potential source of many compounds which are used for the treatment of many diseases. Generally, Lantana camara L. leaf becoming powerful and save alternative means of disease control.

RECOMMENDATION: Depending on the result of our study the following two recommendations were given.

ACKNOWLEDGEMENT: The author wants to express sincere and thanks to the College of Veterinary Medicine, Department of Microbiology, Mekelle University for supplying with the test bacteria.