ABSTRACT: Natural products from plants are rich sources of chemical diversity and most of the pharmacologically active principles currently used as drugs, including anticancer agents are plant products. The present study aims at phytochemical screening and evaluation of the anticancer potential of methanolic extract of Garcinia indica fruit rinds belonging to Family Clusiaceae. The methanolic extract of dried Fruit rinds of Garcinia indica was subjected to the phytochemical tests to confirm the presence of Carbohydrate, alkaloids, steroids, Glycosides, flavonoids, Tannic acid and phenolic compounds, proteins, and fixed oils. In-vitro antioxidant activity of the extract was assayed using DPPH radical scavenging assay, hydrogen peroxide scavenging activity, reducing power activity. Total phenol and flavonoid contents were determined and expressed in gallic acid and catechin equivalent respectively. The results of the study indicate that the methanolic extracts of the Garcinia indica fruit rind possess significant scavenging activity against DPPH (78.1 μg/ml), reducing power activity (0.387 absorbances at 100 μg/ml) free radical scavenging activity (44.64 μg/ml). The free radical scavenging and promising antioxidant activities of the extract may be attributed to the presence of adequate phenolic (0.34 mg/gm) and flavonoid compounds (134.32 μg/g).Cytotoxic activity was assayed in-vitro against HCT-116 by using MTT colorimetric procedure. From the analysis, it was found that methanolic fruit rind extract of Garcinia indica showed nearly 50% HCT-116 cell line inhibition at 53.8 μg/ml. Therefore, it can be concluded that the present study could be extended for the formulation and evaluation of herbal anticancer dosage forms.

INTRODUCTION: Cancer is a leading cause of mortality, and it strikes more than one-third of the world’s population, and it’s the cause of more than 20% of all deaths.

Cancer known medically as a malignant neoplasm, is a broad group of various diseases, all involving unregulated cell growth. In cancer, cells divide and grow uncontrollably, forming malignant tumors, and invade nearby parts of the body. Many cancer patients have received chemotherapeutic agents during illness, treatment based on cell destruction potential by growth interruption. Surgery, chemotherapy, and radiotherapy are the main conventional cancer treatment often supplemented by other complementary and alternative therapies 1.

Plants have been used as an age-old remedy of cancer history of use in the treatment of cancer. Several reports describe that the anticancer activity of medicinal plants is due to the presence of antioxidants present in them. The medicinal plants are easily available, cheaper and possess no toxicity as compared to the modern (allopathic) drugs 2.

Garcinia indica Linn. belonging to family Clusiaceae commonly recognized as ‘Kokum’ found in Maharashtra and particular in Konkan, Goa and the western region of India. In the Indian system of medicine, the fruits of Garcinia indica have been suggested for several diseases such as an appetizer, on skin rashes caused by allergies, treatment of burns, to relieve sunstroke, remedy for dysentery and mucous diarrhea, anti-ulcer, liver tonic, to allay thirst and as a cardiotonic. The main constituent present in the fruit are especially from its rind, are rich in polyisoprenylated benzophenone derivatives such as garcinol and its colorless isomer, isogarcino that has anti-oxidative, chelating, free radical scavenging, anti-glycation, anti-cancer, anti-inflammatory, and antiulcer activities. Garcinol shows strong antioxidant activity since it contains both phenolic hydroxyl groups as well as a β-diketone moiety. The rind also contains hydroxy citric acid (HCA), has been patented for use as hypocholesterolemic agent 3, 4. Kokum contains other compounds with potential antioxidant properties include citric acid, malic acid, polyphenols, carbohydrates, anthocyanin flavonoids and ascorbic acid 5 - 7. Based on reported traditional and chemical constituents we selected Garcinia indica fruits for the present study.

Plant Material: The fruits of Garcinia indica were collected from the Konkan region of Maharashtra and authenticated by A. Benniamin, Scientist, Botanical Survey of India, Pune, Maharashtra, India.

Preparation and Extraction of Plant Material: The fruit rinds of Garcinia indica were cut into pieces and shade dried at room temperature. They were subjected to size reduction to a coarse powder by using mixer grinder. The powder was extracted with methanol using a Soxhlet apparatus 8, 9. The methanolic extract was filtered and evaporated under reduced pressure using rotary vacuum evaporator. The sweet-scented, chocolate colored semisolid residue formed after complete dryness was kept in an airtight and waterproof container which is stored in the refrigerator. The extract was used for determination of total phenol and flavonoid content and also for the assessment of antioxidant capacity.

Folin- Ciocalteau Assay: The total phenolic content of Garcinia indica was estimated according to the method of Makkar et al., (1997) 11. The aliquots of the extract were taken in a test tube and made up to the volume of 1 ml with distilled water. Then 0.5 ml of Folin-Ciocalteu reagent (1:1 with water) and 2.5 ml of sodium carbonate solution (20%) were added sequentially to the test tube. after vortexing the reaction mixture, the tubes were placed in the dark for 40 min, and the absorbance was recorded at 725 nm against the reagent blank. Using gallic acid monohydrate, a standard curve was prepared. The linearity obtained was in the range of 1-10 μg/ml. using the standard curve, the total phenolic content was calculated and expressed as mg of gallic acid per gram of extract.

DPPH (2, 2 Diphenyl-1 picrylhydrazyl) Assay: The DPPH assay was performed by the method given by Brand-Williams et al. 13 Test samples were prepared by adding 0.1ml of ethanolic DPPH solution in 0.1 ml methanolic plant extract solution of varying concentrations (10, 25, 50, 75, 100 μg/ml). The blank sample was prepared, and L-Ascorbic acid was used as a reference standard. DPPH and methanol (1:1) solution was used as control. The decrease in absorbance (A) was measured at 517 nm after 30 minutes in the dark using UV-Visible spectrophotometer. The inhibition % was calculated using the following formula:

Hydrogen Peroxide-Scavenging Activity: The Hydrogen peroxide-scavenging activity of the extract was determined by the method of Ruch et al. 14 The extract was dissolved in 3.4 ml of 0.1M phosphate buffer (pH 7.4) and mixed with 600 μl solution of hydrogen peroxide. The absorbance value (at 230 nm) of the reaction mixture was recorded at 10 min intervals between zero and 40 min for each concentration, a separate blank sample was used for background subtraction.

Reducing Power Activity: The reducing power of the extract was determined by the method of Yen and Duh 15. Different concentrations of extracts were mixed with 2.5 ml of phosphate buffer (200 mM, pH 6.6) and 2.5 ml of 1% potassium ferricyanide. The mixtures were incubated at 50 °C for 20 min. After incubation, 2.5 ml of 10% trichloroacetic acid was added to the mixtures, followed by centrifugation at 650 rpm for 10 min. The upper layer (5 ml) was mixed with 5 ml of distilled water, and 1 ml of 0.1% ferric chloride and the absorbance of the resultant solution were measured at 700 nm.

Method: MTT Assay: The effect of the extract on the viability of HCT-116 were determined by MTT (3-[4,5-dimethyl thiozole-2-yl] -2-5-diphenyl tetra zolium bromide) assay. 100μl of cell suspensions in growth medium were plated in 96-well microtitre plate at concentrations of 1 × 104 cells/well and incubated for 48h at 37 °C in a humidified incubator. After 48 h incubation, the cell reaches the confluence. Then, cells were incubated in the presence of various concentrations of the extracts in 0.1% DMSO for 72 h at 37 °C.

After removal of the sample solution and washing with phosphate buffered saline (pH 7.4), 20 μl of MTT (5 mg/ml) was added to each well of the plate. The plate was incubated for 4h at 37 °C. The solution in each well including MTT was aspirated and 100 μl of buffered DMSO was added to dissolve form a zone. The plates were shaken for 5 min. Optical density was measured on a microplate ELISA reader at 540nm with DMSO as control. The cytotoxicity was obtained by comparing the absorbance between the samples and control. The percentage of inhibition was calculated as follows:

+ve shows presence of a constituent, -ve shows the absence of constituent.

Estimation of Total Phenolic and Flavonoid Content: Flavonoids protect cells against the damaging effects of reactive oxygen species, such as singlet oxygen, superoxide, peroxyl radicals, hydroxyl radicals, & peroxynitrite. Epidemiological studies have shown that flavonoid intake is inversely related to mortality from coronary heart disease and the incidence of heart attacks. Total flavonoid content of methanolic extract of Garcinia indica was found to be 134.32 μg/g by aluminium chloride colorimetric assay. The total phenolic and total flavonoid content results were enlisted in Table 2.

DPPH (2,2 Diphenyl-1 picrylhydrazyl) Assay: DPPH easily accepts an electron or hydride radical to become a stable diamagnetic molecule. DPPH radicals react with suitable reducing agents as a result of which the electrons become paired off forming the corresponding hydrazine. The solution, therefore, loses color stoichiometrically depending on the number of electrons taken up. Antioxidant activity of methanolic extract of Garcinia indica was performed by DPPH (2, 2 Diphenyl-1 picrylhydrazyl) assay using ascorbic acid as standard. The amount of extract needed for 50% inhibition (IC50). 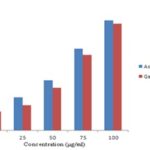 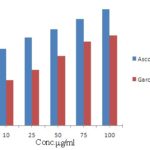 Reducing Power Activity: The antioxidant can donate an electron to free radicals, that leads to the neutralization of the radical. Reducing power was measured by direct electron donation in the reduction of Fe3+(CN−)6–Fe2+(CN−)6. The product was visualized by forming the intense Prussian blue color complex and then measured at 700 nm.

At concentration 10 μg/ml and 100 μg/ml Ascorbic Acid (Reference) and Garcinia indica showed absorbance with about 0.157-0.411 and 0.034-0.387 respectively at 700 nm. Thus Garcinia indica exhibited reducing activity might be due to hydrogen donating ability. 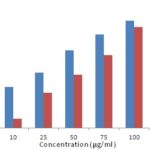 In-vitro Cytotoxicity Studies: In MTT assay, methanolic extract of Garcinia indica showed significant growth inhibitory effect. It was found that the % growth inhibition increases with the increasing concentration and IC50 value of this assay were 53.8 μg/ml. Garcinia indica has potential activity on HCT 116 that indicates extract possess relative selective cytotoxicity to colonic cancer cells. Result of antitumor activity was depicted in Table 6. 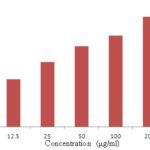 ACKNOWLEDGEMENT: I wish to express my sincere gratitude to Principal Dr. (Mrs) Kiran Bhise and the Management, of M.C.E. Society’s Allana College of Pharmacy, Pune for allowing me to carry out the research work and for their support throughout the work. I would like to express my gratitude towards my Co-supervisor Dr. Vijayalakshmi Prakya, Principal Siddhartha Institute of Pharmacy, Hyderabad and Jawaharlal Nehru Technical University, Hyderabad, Telangana, India for continuous support and guidance.