ABSTRACT: Sweet violet also known as the Viola odorata, blooms in continental climate conditions in early spring with delicate flowers of attractive scent. It has been traditionally the part of various indigenous preparations and being used to cure respiratory and inflammatory conditions. The present review article is an attempt to cover recent developments in the phytochemical and pharmacological potential of drug Viola odorata contains an alkaloid, glycoside, saponins, methyl salicylate, mucilage, and vitamin C. Traditionally V. odorata is worthwhile to cure Jaundice. V. odorata has shown anti-inflammatory, antipyretic, antibacterial activity, hepatoprotective activity. Further investigations are exploring the possible use of these phytochemicals as pharmacological agents are warranted. The article reviews is an attempt to compile and documented information on a different aspect of Viola odorata pharmacological properties and highlight the need for research and their potential development.

INTRODUCTION: Viola odorata is a species of the genus Viola native to Europe and Asia, but has also been introduced to North America and Australasia. It is commonly known as wood violet 1. The medicinal plant Viola odorata L. (Violaceae) is a popularly known as “Banafshah” and sweet violet in Asia and Europe respectively. It is found in high altitudes of Himalayas, Europe and throughout North America. It is a long trailing Plant of fewer than 6 inches height. The Plant has a thick and scaly underground stem, with rooting runners. It possesses heart-shaped leaves with scalloped or slightly serrated edges are dark green, smooth or sometimes downy underneath, and grow in a rosette at the base of the plant.

Flowers are deep purple or blue to pinkish or even yellow whitish 2, 3. Sweet violet (Viola odorata L.) Grows wild, in places exposed to sun, alongside hedges, river banks, on the edges of deciduous forests and in forest glades 4. It is wide-spread all across Croatia, along with the mentioned species; lists further 19 species of the same genus. The Mediterranean is considered to be the sweet violet’s original habitat, and nowadays it ranges from the North of Europe to South Africa, Tierra del Fuego and Australia 4.

Viola odorata L. (sweet violet) belongs to family Violaceae, is an evergreen perennial herb growing about 10 cm tall. It flowers in late winter. The flowers are nodding, deep violet and sweet-scented. It is distributed in Kashmir and western Himalayan regions at an altitude of 1500 to 1800 m a.s.l. The herb is well known for its Pharmaceutical importance in Ayurvedic and Unani medicinal system. It is used for the treatment of whooping cough. Its drug is also anti-inflammatory, diaphoretic, diuretic, emollient, expectorant, antipyretic and laxative. It contains salicylic acid which is used to make aspirin hence effective for the treatment of headaches, migraine, and insomnia. The roots of the plant yield an alkaloid violin which is used as an expectorant. There is a general feeling that the populations of V. Odorata are decreasing at an alarming rate. The plants of this genus are known to hybridize at intra- and inter-specific levels very freely in nature. Therefore, taxonomically it has become very difficult to distinguish between the different species, with the result that the drug is highly adulterated with other congeners viz. Viola biflora, V. cinerea, V. pilosa, V. cauescens, and V. sylvestris 5.

Sweet violet is used for the treatment of bronchitis, common digestive disorders, postoperative tumor metastasis, diabetes, and cancer. Phytochemically, different groups of compounds, have been isolated from various species of this genus like cyclotides, flavonoids, alkaloids, and triterpenoids. Some of them already have been scientifically accepted as antifungal, antibacterial, anticancer, antioxidant, antiasthmatic, anti-inflammatory, anti-HIV and antipyretic agents 6, 7, 8. The plant is conventionally propagated through the divisions of the rhizomatous disc, but for large scale cultivation, the use of the seeds is preferred. However, the germination rate of this medicinal plant is low due to sever seed dormancy 9.

Seed dormancy is a physiological occurrence in some medicinal plants caused by external or internal factors such as hard seed coat, immature embryo, rudimentary embryo and inhibitors materials and needs to temperature changes prevent of seed germination, even in optimal conditions 10. Seed germination has also prevented due to the embryo is constrained by its surrounding structures such as seed coat and endosperm. It is possible to release dormancy by removing the surrounding structures in seed and scarification, embryo culture and endosperm culture techniques are applied to break seed dormancy 11.

Thermodormancy which is expressed as germination in a narrower temperature range. Low temperatures and pre-chilling treatments are considered as the common approach to break seed dormancy in Violacea family. It is reported that for some species of pansy (Viola), germination at high temperatures (>30˚C) can be inhibited by thermodormancy. To overcome thermodormancy, cold stratification and growth regulators such as gibberellic acid alone and in combination with kinetin and ethylene also plays an important role to increase the germination rate of the seeds in Viola odorata 12, 13.

Chemical Constituents: Viola odorata contains an alkaloid, glycoside, saponins, methyl salicylate, mucilage and vitamin C 14. About 30 cyclotides are identified from the aerial parts and roots of Viola odorata, 13 of which are novel sequences 15. The aqueous preparations of Viola odorata L. Flowering tops revealed the presence of anthocyanins 16.

The analysis of essential oil composition of the leaves of Viola odorata L. revealed the presence of 25 identified compounds, representing 92.77% of the oil with butyl-2-ethyl hexyl phthalate (30.10%) and 5, 6, 7, 7a-tetrahydro-4,4,7a-trimethyl-2(4H)-benzofuranone (12.03%) being the two main components 17. Viola odorata also produces macrocyclic peptides 18. According to the HS-SPME GC/MS analyses, ethyl hexanoate and (2E,6Z)-nona-2,6-dienol were specific volatile compounds of the sample with French origin, while (E, E)-hepta-2,4-dienal, hexanoic acid, limonene, tridecane, and eugenol were specific of the samples with Egyptian origin.

Additional compounds that were not detected by HS-SPME GC/MS analysis were revealed by GC-O analyses, some of them being markers of origin. Pent-1-en-3-ol, 3-methyl but-2-enal, 2-methoxy-3-(1-methyl ethyl) pyrazine, 4-ethyl benzaldehyde, β-phenethyl formate, and 2-methoxy-3-(2-methyl propyl)pyrazine revealed to be odorant markers of the French sample, whereas cis-rose oxide, trans-rose oxide, and 3,5,5-trimethylcyclohex-2-enone were odorant markers of the Egyptian samples 19. A naturally occurring linear cyclotide, violacin A is isolated from the plant Viola odorata 20, 21. The GC-MS analysis of active fraction revealed the presence of methanolic and ethanolic extracts of Viola odorata showed the presence of pentane 2, 3, 4- Trimethyl (45%), n-hexadecanoic acid (28.85%), 10- Undecyn-1-ol (14.43%) and pentadecanoic acid (8.14%) 22. 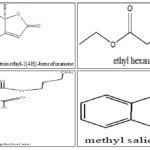 Antioxidant Activity: The plant has been reported to possess antioxidant 7 and diuretic 23 activities. The data obtained in the in-vitro models establish the antioxidant potency of all extracts 24. Flowers of spicy violet, Viola odorata (Violaceae), were collected from two different locations.

The flowers were extracted with water and the suspension filtered and lyophilized for 3 days. Extracts showed antioxidant potential using scavenging of 2, 2-diphenyl-1 -picrylhydrazyl radical 25.

Headache and Insomnia: It can be helpful in the treatment of headaches, insomnia, dizziness and exhaustion 26.

Sedative and Pre-Anesthetic: The leaf extract has sedation and pre-anesthetic effects at a dose of 100-400 mg/kg 27.

Bronchitis and Cough: The whole aerial part including stem, flowers, and leaves are used in bronchitis, cough, sneezing 28, 29.

Cancer and Antitumor Activity: The whole aerial part including stem, flowers, and leaves are used in cancer. Viola was reported as pharmacological tools and possibly as leads to antitumor agents 33. Cycloviolacin O2 (cyo2), a cyclotide from Viola odorata (Violaceae) has antitumor effects and causes cell death by membrane permeabilization. This study documents several cyclotides with robust cytotoxicity that may be promising chemosensitizing agents against drug-resistant breast cancer 34.

Methanol and ethanol extracts of the leaves of V. odorata L. were found effective against all tested strains of bacteria whereas fungi showed resistance to all extracts. Ethanol extract exhibited higher inhibition against E. coli (10 mg/ml), Bacillus subtilis (20 mg/ml), Staphylococcus aureus (20 mg/ml) and Pseudomonas aeruginosa (40mg/ml). Hence, V. odorata is used in the treatment of bronchitis, cystitis, and tonsillitis 36.

Antidyslipidemic and Antihypertensive Activity: These data indicate that the vasodilator effect of the plant which possibly explains the fall in BP. The plant also showed a reduction in body weight and antidyslipidemic effect which may be due to the inhibition of synthesis and absorption of lipids and antioxidant activities. Thus, this study provides a pharmacologic rationale to the medicinal use of Viola odorata in hypertension and dyslipidemia 37.

Repellency against Mosquitoes: The oils violet (Viola odorata) which induced a protection time of 8 h at the maximum and a 100% repellency against Aedes, Anopheles, and Culex mosquitoes 41.

CONCLUSION: The present review article was concluded that the Viola odorata contains various phytoconstituents and different phytocomponents which are responsible for various pharmacological actions of Viola odorata. However, more investigations must be carried out to evaluate the mechanism of action of medicinal plants with different activities. In future the work on isolation of the compounds and establish a pharmacological agent for the treatment of different diseases is useful from the natural sources.