PHYTOCHEMICAL AND PHARMACOLOGICAL IMPORTANCE OF CURCUMA AROMATICA SALISB: A REVIEW

PHYTOCHEMICAL AND PHARMACOLOGICAL IMPORTANCE OF CURCUMA AROMATICA SALISB: A REVIEW

ABSTRACT: Curcuma aromatica salisb, which belongs to the Zingiberaceae family, is a perennial herb. The rhizome of the plant consists of alkaloids, curcuminoids, flavonoids, tannins, and terpenoids which are reported to be the reasons for its various pharmacological properties. The extraction of compounds in different solvents shows that the plant contains neocurdione, curdione and germacrone as its major components. An extensive literature survey showed that the plant has anti-obesity, anti-acne, anti-cancerous, anti-tussive, anti-oxidant, larvacidal anti-inflammatory, anti-bacterial and wound healing properties. The rhizome extract of the plant is highly effective against many human pathogens as well as microorganisms causing food spoilage and foodborne diseases. The aim of this study is to review the phytochemical and pharmacological properties of Curcuma aromatica (CA).

INTRODUCTION:  Herbal medicine is the oldest form of medical treatment. People used medicinal plants for different therapeutic purposes from ancient time and now, it is the precursor of the modern pharmaceutical field. Seeds, berries, roots, leaves, bark or flowers of the medicinal plants are being utilized for medicinal purposes. Curcuma aromatic is a member of the Curcuma genus which belongs to the family Zingiberaceae. Curcuma aromatica is commonly known as janglihaldi or yellow zedoary. It is an erect perennial herb scattered throughout India and cultivated in Kerala and West Bengal.

It has been traditionally used as an aromatic medicinal cosmetic and is also a promising drug for therapeutic purposes. Curcuma aromatica is also used for treating diseases with blood stasis and has been regarded as a potent anticancer herb. It is used for external applications in indigenous medicine on sprain, skin diseases, bruise, in snake poison, and also to enhance complexion. The rhizomes are often used as an ingredient of food flavor and also in cosmetic herbal medicines.

Wild turmeric is recognized as a medical herb with strong antibiotic properties. In Chinese medicine, it is believed to play a role in preventing and curing cancer. In an effort to remove cell accumulations such as tumors, Curcuma aromatica is often used. It contains aromatic volatile oils that reduce aggregation of platelets (sticking of the blood cells to form masses), remove excessive lipids from the blood and reduce inflammation 1. The following is a comprehensive and up-to-date review of the distribution, phytochemistry, and pharmacological properties of Curcuma aromatica with an urge for further advancements in the medicinal uses of the herb worldwide.

Botanical Description: Wild turmeric is aromatic and pretty ginger with stout underground rhizomes. Foliage dies down in late in autumn and the rhizomes remain dormant in winter.

The inflorescence appears in early spring from the base of the rhizome. Flowers are pinkish-white in color, with an orange lip. The stalk grows to about 8 to 10 inches tall and is crowned with enlarged colored bracts tipped with pink. Leaves appear after the flowers. When in full growth the plants can reach a height of about 3 ft tall. Leaves are broad and very decorative, elliptic and 3 - 4 ft long and 20 cm wide, leaf stalk being as long as the blade. Good for cut-flower use with a vase life of about 10 days for a fresh stem. This species is found in the eastern Himalayas and inhabits warm forest areas. This plant grows rapidly during the summer monsoon months. Rhizomes used to a limited extent in villages for flavoring curries. The rhizomes have characteristic fragrance on attaining maturity. It does not set seeds usually.

Improper cultivation practices, deforestation, habitat destruction, and the high demand of pharmaceutical industries on wild sources make this plant most threatened in many South Asian countries 2. Since there are a number of constraints for the commercial cultivation of the plant, micropropagation protocol has been optimized for the large scale production to meet industrial demand for the rhizome and also for conservation 3. 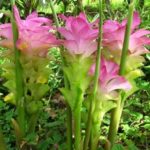 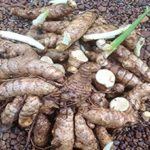 Anti-oxidant Activity: A study has been conducted to observe the antioxidant activity of Curcuma aromatica by ferric thiocyanate method. Different solvents like ethanol, hexane, ethyl acetate, dichloromethane, acetone, and water were used for extraction and the mass of dried matter obtained from 5 g of powdered rhizome. The study result showed that ethyl acetate and dichloromethane extracts have maximum antioxidant activity probably due the solubility of phenolic compounds 10.

Larvicidal Activity: A study has been done to identify, isolate and to test the efficacy of compounds from rhizomes of C. aromatica against 4th in star larvae of C. quinquefasciatus. The soxhlet extraction of C. aromatica yielded 12.8% of crude petroleum ether extract and 0.24% and 0.52% of active compounds 9-oxoneopro-curcumenol and neoprocurcumenol respectively. Petroleum ether extract showed its larvicidal efficacy with LC50 and LC90 being 11.42 and 18.00 ppm respectively 11.

Anti-tumor Activity: Germacrone is one of the major bioactive components of CA which has been proven to possess anti-tumor properties. In a study, it has been shown that germacrone inhibits the proliferation of glioma cells by promoting apoptosis and inducing cell cycle arrest 13. Studies were also conducted on antitumor effect and pharmacological actions of beta-elemene isolated from the rhizome of CA. Two tumor inhibitory experiments of Curcuma aromatica oil (CAO) on hepatoma in mice were conducted to reveal the inhibitory effects of CAO on cell proliferation of hepatoma in mice. The inhibitory effects of CAO on proliferation of hepatoma in mice were evaluated by DNA image cytometry and immune-histochemical staining of proliferating cell nuclear antigen (PCNA).

In two experiments, the resultant tumor inhibitory rates were 52% and 51% respectively. Compared those with control groups that are treated by saline, both differences were statistically significant (P<0.01) 14. Another study was also conducted in in-vivo mice models to evaluate its tumor reducing properties. In-vivo tumor reduction studies showed that a dose of 35.7 mg/kg body weight significantly reduced the ascetic tumor in DLA-challenged mice and increased the lifespan with respect to untreated control mice 15.

Anti-cancer Activity: C. aromatica has shown therapeutic activity for the treatment of cancer by promoting blood circulation to remove blood stasis 16. The oil infusion via the hepatic artery has been proven to exert ideal therapeutic effects in humans with primary liver cancer and rats with transplanted hepatoma 17. A study was conducted for evaluating the anticancer activity of aqueous extract of Curcuma aromatica and related molecular mechanisms of CA in human colon carcinoma LS- 174-T cell line with wild-type p53 used as a model cell. Aqueous extract of Curcuma aromatica inhibited LS-174-T cell proliferation in a dose- and time-dependent manner and colony formation in a dose-dependent manner. This study suggested that aqueous extract of Curcuma aromatica might be shown activity as an anti-proliferative herb for colon carcinoma 18.

Anti-platelet Activity: Compounds isolated from CA and other drugs were evaluated for their ability to inhibit arachidonic acid- (AA), collagen and ADP-induced platelet aggregation in human whole blood. An anti-platelet activity of the compounds was measured in-vitro by the chrono log whole blood aggregometer using an electrical impedance method.

Anti-tussive Activity: Ethanolic extract of Curcuma aromatica rhizomes was investigated for its anti-tussive effect on sulfur dioxide induced cough model in mice. The results showed that the extract exhibited significant anti-tussive activity in a dose-dependent manner 20.

Anti-melanogenic Activity: Antimelanogenic effects of CA extracts were investigated by assessing tyrosinase mRNA levels, tyrosinase activity, and melanin content in human melanoma cells exposed to ultraviolet irradiation. The study result showed that ultraviolet a mediated melanin productions were suppressed by CA extracts at non-cytotoxic concentration. This study also suggested that cellular oxidative stress inhibition and antioxidant defenses improvement might be the mechanisms by which the extracts showed protective effects on ultraviolet A-dependent melanogenesis 21.

CONCLUSION: C. aromatica is one of the most useful plants with highly potent pharmacological activities. It can be said that Curcuma aromatica is a medicinal plant with a wide range of biological activities that can be used for the preparation of various formulations for the treatment of inflammation, nephrotoxicity, wound, and microbial infections alone or associated with conditions like diabetes, tumor, and cancerous growth.

ACKNOWLEDGEMENT: Authors are grateful to Jahangirnagar University, Department of Pharmacy, Savar, Dhaka, Bangladesh, for providing the necessary facility to carry out the study.