ABSTRACT: The drug is obtained from the dried fruit of Nyctanthes arbor-tristis of family Oleaceae. It is also called Coral Jasmine, Parijat, and Harsingar, etc. To confirm the veracity of the claim above, the anticonvulsant effect of the ethanolic extract has been evaluated. In this investigation, the rats were pretreated with different dose of Nyctanthes arbor-tristis ethanolic extract (100, 200 mg/kg) for 14th days and then, they were subjected to maximal electroshock-seizures, the dose of 100 and 200 mg/kg significantly reduced the duration of hind limb extension, and both the doses were statistically found to be equipotent. The reference, standard, Phenytoin (30 mg/kg) provided complete protection. Thus, the present study revealed the anticonvulsant effect of Nyctanthes arbor-tristis against maximal electroshock-induced convulsion in the rat.

INTRODUCTION: Nyctanthes arbour - tristis commonly called as coral jasmine. It is a tree growing to 10 m tall, with flaky grey bark. The leaves are simple, opposite, 6 - 12 cm long and 2 - 6.5 cm broad, with an entire margin. The flowers are fragrant, with a five to eight-lobed white corolla with an orange-red center. The calyx is 6 - 8 cm long. The fruit is a flat brown heart-shaped to round capsule 2 cm diameter, with two sections each containing a single seed 1. The plant is found in different parts of India, including Himalayan region, Western Uttar Pradesh, Punjab. It is also distributed in Bhutan, Nepal, Burma, and Bangladesh 2.

Different parts of Nyctanthes arbor-tristis are known to possess various ailments by rural mainly tribal people of India along with its use in Ayurveda, Siddha and Unani systems of medicines. Juice of the plant leaves is used as antimicrobial activity 3, anxiolytic activity 4, and hepatoprotective activity 5. In the traditional system of medicine, it is also used in nervous disorders so Nyctanthes arbour - tristis is recommended for the treatment of epilepsy 6.

Epilepsy is a common neurological disorder which is manifested by recurrent unprovoked seizures. It is affecting about 5% of the world population. A seizure is an abnormal function of ion channels and neural networks which results in rapid, synchronous, and uncontrolled spread of electrical activity in brain 7. This revival of interest in plant-derived drugs is mainly due to the current widespread belief that “Green Medicine” is safe and more dependable than the costly synthetic drugs, many of which have adverse effects 8.

Preparation of the Extract: The dried fruit of the plant were collected and powdered mechanically to a coarse powder. This powered drug was kept in airtight container until the time of use. About 1kg of the powder material was subjected to Soxhlet extraction using 70% ethanol for 48 h. The solvent was distilled off at low temperature under reduced pressure and evaporate at 40 ºC. The yield of the product was approximately 5% w/w. The ethanolic extract of Nyctanthes arbor-tristis (NAE) was stored in a refrigerator and reconstituted in water for injection just before use.

Experimental Animals: Wister rat (8 - 10 weeks) of both sexes were fed with standard diet before and after during the experiment. After randomization into various groups and before initiation of experiment, the rats were acclimatized for 7 days under standard environmental conditions of temperature, relative humidity, and dark/light cycle. Animals described as fasting were deprived of food and water for 16 h ad libitum. The present study was conducted after getting experimental protocol approval from the Institutional animal ethics committee (SDCOP& VS/CPCSEA/IAEC/ 014/M.PHARM/2015).

Acute Toxicity Studies: Acute oral toxicity study of ethanolic extract of Nyctanthes arbor-tristis was carried out according to OECD guidelines 423. Acute toxicity studies were conducted by using Wister rat of either sex weighing 150 - 200 gm. The animals fasted overnight before the experimental procedure. The method of Up and down or staircase was used to determine the dose. The median lethal dose of the extracts having anticonvulsant activity was determined by administering 100, 200, 2000 mg/kg dose and percent mortality was observed 24 h later.

Maximum Electroshock Induced Seizures (MES): The electrical shock applied through ear-clip electrodes separately to each mouse. The stimulus duration was 0.2 s and the current frequency 150 mA. Each group containing five rats which was administered with extract and standard drug (phenytoin 30 mg/kg I.P.) for seven days and on an experimental day, the test was started 30 min after drug administration. The animals were observed for the occurrence of tonic hind limb extension and mortality for a duration of 15 min. The NAE was administered to Group III, and IV (100 and 200 mg/kg body P.O) whereas group I and II received 1% of Tween 80 and Phenytoin 30 mg/ kg I.P. respectively.

Statistical Analysis: All the data were expressed in mean ± SEM. The significance of the difference in means between control and treated animals was determined by One-way analysis of variance (ANOVA) followed by Dunnett’s multiple comparison test. Significance of difference between normal and control group was considered P<0.05.

Acute Toxicity Studies: There was neither change in the behavioral pattern or any sign of toxicity during the observations up to 24 h for mortality. The extracts were safe up to a maximum dose of 2000 mg/kg. The biological evaluation was carried out at doses of 100 and 200 mg/kg.

All the results were expressed as mean ± SEM (n = 5), for each experimental group. The statistical analysis was carried out using one way ANOVA method. Significant after analysis of variance (ANOVA) followed by Dunnett’s test. *P ≤ 0.05, **P≤ 0.01 and ***P≤ 0.001; when compared to control group. 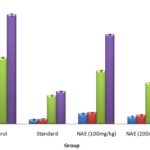 CONCLUSION: The present study revealed that Nyctanthes arbor-tristis ethanolic extract possesses significant anticonvulsant activity against MES induced convulsions. In conclusion, the ethanolic fruit extract of Nyctanthes arbour-tristis demonstrated possess anticonvulsant properties and less toxicity in experimental animals at the doses used. However, further studies still needed to be carried on the exposure of the extract to human and its use in folk medicine for seizures control.

ACKNOWLEDGEMENT: I express my sincere thanks to S. D. College of Pharmacy and vocational studies, Muzaffarnagar for their support in providing the facilities to complete the work.