INTRODUCTION: Centratherum anthelminticum (L.) Kuntze is an ethnomedicinal plant commonly grown in India and Southeast Asia. It belongs to Asteraceae family, and its seeds are known as Kalijiri in Hindi 1, 2, Vernonia anthelmintica, and Conyza anthelminticum are scientific synonyms of this plant. The plant is an erect, pubescent, annual herb which can grow up to 90 cm in height and the seed are brownish, with a hot, sharp taste and astringent properties. The major chemical constituents present in this plant are glycosides, carbohydrates 3, phenolic compounds, and tannins, flavonoids 4, proteins, saponins, sterols 5, lipids, fats 6, sesquiterpene lactones, alkaloids 7, terpenoids 8 and steroids 9.

Plant Material: The dried seeds of C. anthelminticum were collected from the local market of Ujjain Fig. 1, 2.

Seeds Extract: An amount of 500g of fresh seeds was weighed and shade dried, cleaned, and powdered coarsely. The powdered seeds were extracted by hexane, acetone, ethanol and methanol extraction for 95-126 h each in a Soxhlet extractor (40-60 ºC). The solvent was removed by rotary film evaporator, and concentrated extracts were preserved in refrigerator for further use. 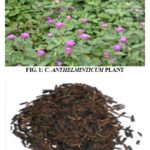 Antimicrobial Activity: The different seed extracts were subjected to the antimicrobial assay followed by agar well diffusion method 30. 38 gm of Muller Hinton Agar was suspended in 1000ml of distilled water and heated up to boiling point for complete mixing. To sterilize, it was autoclaved at 15 lbs pressure at 121 ºC for 15 min. 100 mg of each extract was suspended in 5ml of 10% DMSO. Approximately 25 ml of sterilized selective medium was poured into each Petridis and solidified at room temperature. Using a sterile cotton swab, the bacterial culture was swabbed on the surface of pre-poured nutrient agar plates. The plates were allowed to dry for 15 min, before use in the test. A well of 10mm diameter punched off at previously marked Petri plates into agar medium with the sterile cup before then it was filled with 100 ul of extract every time. Plates were places for 30 min in the refrigerator for diffusion of extracts and then incubated at 37 ºC for 24 h. Zone of inhibition (excluding well diameter) formed was measured as a property of the antibacterial and antifungal activity.

Antitubercular Activity: The different seed extracts of C. anthelminticum were screened for antitubercular activity against Mycobacterium tuberculosis H37RV strain using Lowenstein–Jensen medium method 31. Ten mg of each extract was dissolved in 10 ml of DMSO to get a concentration of 1000 ug/l. Further dilutions were made with DMSO to get different concentrations such as 100, 10, and 1 ug/ml. 0.8 ml of each concentration was used for the study. To this, 7.2 ml of Lowenstein–Jensen medium was added.

RESULT AND DISCUSSION: In the present study, an amount of 500g of C. anthelminticum seeds and solvents such as hexane, acetone, ethanol, and methanol were used for the extraction. From each sample 10 ml, extracts were collected for screening biological activities. 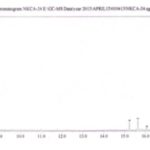 Antimicrobial Activity of Seed Extracts of C. anthelminticum: In the present study, the antimicrobial activities of different extracts of C. anthelminticum were tested against nine bacteria (Staphylococcus albus, Staphylococcus aureus, Staphylococcus heamolyticus, Vibrio cholera, Pseudomonas aerusinosa, Klebisella aerogenes, Escherichia coli, Pseudomonas pyocyneaus, Diplococcus peunoniae). It was clear from the present result that ethanol extract exhibited pronounced activity against all the bacteria. The presence of phytoconstituents in the seed extracts may be responsible for the antibacterial activity of the plant. It has been documented that different solvents have diverse solubility capacities for different phytoconstituents. The result was represented in Table 2.

A sweep from the Mycobacterium tuberculosis H37RV culture was discharged with the help of nichrome wire loop with a 3 mm external diameter, into a sterile distilled bijou bottle containing 6 mm glass beads and 4 ml of sterile distilled water. The bottle was shaken with the help of a mechanical shaker for 2 min, and then using nichrome wire loop, 3 mm external diameter, a loopful of the suspension was inoculated on the surface of each of Lowenstein–Jensen medium containing the test compounds Fig. 4. Lowenstein–Jensen medium Containing pyrazinamide as well as control were inoculated with Mycobacterium tuberculosis H37RV strain. The inoculated medium was incubated at 37ºC for 4 weeks. At the end of 4 weeks, readings were taken and recorded in Table 3. 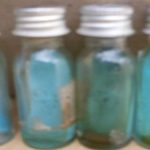 CONCLUSION: From this study, it can be concluded that the ethanol extract of Centratherum anthelminticum seeds exhibited pronounced activity against all the tested bacteria.