ABSTRACT: Plants have been used for centuries as a remedy for human diseases because they contain phytochemical components of therapeutic values. The whole plant of the Trigonella foenum, Zea mays and Oryza sativa were selected for in this study to find out the phytochemicals and antioxidant property. Phytochemicals were extracted using various solvents such as Hexane, Ethyl acetate, and ethanol. Screening of phytochemicals showed positive results for the presence of flavonoid, alkaloid, phenols, coumarins, steroids, and quinones. Free radical scavenging activity was determined using DPPH is a stable antioxidant. Ethyl acetate extract of Zea mays showed better antioxidant activity at a concentration of 100-150 µg followed by ethanol extract. An ethanol extract of Trigonella foenum revealed antioxidant activity at a concentration of 100-150 µg followed by ethyl acetate extract. These activities may be due to the presence of flavonoid, alkaloid, phenols, and steroids in plant extracts. Antioxidant activity was not observed in Oryza sativa.

INTRODUCTION: Phytochemicals are defined as bioactive nonnutrient plant compounds in fruits, vegetables, grains and other plant foods that have been linked to reducing the risk of major chronic diseases 1. The phytochemicals vary in distribution within the plant parts, as well as in their occurrence within plant species. Free radicals are known as major contributors to several clinical disorders such as diabetes mellitus, cancer, liver diseases, renal failure and degenerative diseases as a result of deficient natural antioxidant defense mechanism 2.

Antioxidants are the compounds which help to delay or inhibit the oxidation of lipids and other molecules through the inhibition of either initiation or propagation of oxidative chain reactions 3. Free radicals contribute to more than one hundred disorders in humans including atherosclerosis, arthritis, ischemia, reperfusion injury of many tissues, central nervous system injury, gastritis, cancer, and AIDS 4-5.

Free radicals are often generated as by-products of biological reactions or from exogenous factors. The involvements of free radicals in the pathogenesis of a large number of diseases are well documented 6. Medicinal plants can protect against harmful effects of ionizing radiation. Natural plant extracts or pure compounds are safe ingredients, which do not have any toxic effects. According to 7 plant extracts can be characterized by polyvalent formulations and interpreted as an additive or in some cases potentiating. First, the therapeutic benefit of medicinal plants is usually attributed to their antioxidant properties, and oxidative stress is a prominent feature of these diseases 8-9. Therefore, there is a need for isolation and characterization of natural antioxidants having less or no side effects, for use in foods or medicines to replace synthetic antioxidant.

Collection of Plants: Plants for this study were collected from Chinnapaliyapattu, Tiruvannamalai.

Preparation of Extracts: Collected plants were dried at room temperature and ground to make a fine powder. 20 gm of plant powder was well dissolved in 100ml of solvents (Hexane, Ethyl acetate, and Ethanol) (ratio 1:5). The suspension was filtered by using Filter paper of pore size 0.2 µm. The filtrate was then air dried and extracts were collected in sterile vials for further use.

Test for Carbohydrates: To 2 ml of plant extract, 1ml of Molisch’s reagent and a few drops of concentrated sulfuric acid were added. Presence of purple or reddish color indicates the presence of carbohydrates.

Test for Tannins: To 1 ml of plant extract, 2 ml of 5% ferric chloride was added. Formation of dark blue or greenish black indicates the presence of tannins.

Test for Saponins: To 2 ml of plant extract, 2 ml of distilled water was added and shaken in a graduated cylinder for 15 min lengthwise. Formation of a 1 cm layer of foam indicates the presence of saponins.

Test for Flavonoids: To 2 ml of plant extract, 1 ml of 2N sodium hydroxide was added. Presence of yellow color indicates the presence of flavonoids.

Test for Alkaloids: To 2 ml of plant extract, 2 ml of concentrated hydrochloric acid was added. Then a few drops of Mayer’s reagent were added. The presence of green color or white precipitate indicates the presence of alkaloids.

Test for Quinones: To 1 ml of extract, 1 ml of concentrated sulfuric acid was added. Formation of red color indicates the presence of Quinones.

Test for Glycosides: To 2 ml of plant extract, 3ml of chloroforms and 10% ammonia solution was added. Formation of pink color indicates the presence of glycosides.

Test for Cardiac Glycosides: To 0.5 ml of extract, 2ml of glacial acetic acid and a few drops of 5% ferric chloride were added. This was under layered with 1 ml of concentrated sulfuric acid. The formation of a brown ring at the interface indicates the presence of cardiac glycosides.

Test for Terpenoids: To 0.5 ml of extract, 2 ml of chloroform was added and concentrated sulfuric acid is added carefully. Formation of red-brown color at the interface indicates the presence of terpenoids.

Test for Triterpenoids: To 1.5 ml of extract, 1 ml of Liebmann-Buchard Reagent (aecticanhydride+ concentrated sulfuric acid) was added. Formation of blue-green color indicates the presence of triterpenoids.

Test for Phenols: To 1 ml of the extract, 2 ml of distilled water followed by a few drops of 10% ferric chloride was added. Formation of blue or green color indicates the presence of phenols.

Phlobatannins: To 1 ml of plant extract few drops of 2% HCl was added the appearance of red color precipitate indicates the presence of phlobatannins.

DPPH Free Radical Scavenging Activity: The ability of the extracts to annihilate the DPPH radical (1, 1-diphenyl-2-picrylhydrazyl) was investigated by the method described 10. A stock solution of leaf extracts was prepared for the concentration of 1 mg/ml. 100 µg of each extract were added, at an equal volume, to the methanolic solution of DPPH (0.1 mm). The reaction mixture is incubated for 30 min at room temperature; the absorbance was recorded at 517 nm.

The experiment was repeated for three times. BHT was used as standard controls. The annihilation activity of free radicals was calculated in % inhibition according to the following formula 10.

The phytochemical analysis of the hexane, ethyl acetate and ethanol extracts of Trigonella foenum and Zea mays showed positive results for the presence of Carbohydrates, flavonoids, alkaloids, phenols, steroids, coumarins. Ethyl acetate extract gave the maximum extraction of phytochemicals than some other extracts followed by Ethanol. In Zea mays, most prominent type of flavonols was glycosides of quercetin and isorhamnetin 11. Zea mays husk has analgesic and anti-inflammatory effects that are due to the presence of tannins and polyphenolic constituents 12. Our study also revealed that the whole plant extract of Zea mays showed the presence of phenolic compounds. 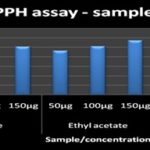 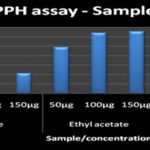 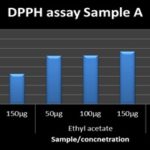 CONCLUSION: This study suggests that the Trigonella foenum and Zea mays extracts have antioxidant activity, which may be helpful in preventing or slowing the progress of diseases involved as a result of oxidative stress.