ABSTRACT: The present study was investigated to determine the possible phytochemical components from the solvents such as hexane, ethyl acetate and ethanolic extract of Aerva lanata. Among the phytochemical screening of these extracts, ethanolic extract showed that the whole plant was rich in carbohydrate, tannin, flavonoids, quinones, cardiac glycosides, phenols, and coumarins. Further, the study was extended by analyzing the antioxidant potential using DPPH method. Among all the extracts ethanolic extract showed better antioxidant activity at the concentration of 75 µg/ml when compared to other solvents.

INTRODUCTION: Medicinal plants are the richest bio-resources for the discovery of modern drugs. These medicinal plants possess certain phytochemical compounds which act as an ailment for the infective diseases like bacterial, fungal, viral and cancer disorders. Aerva lanata Linn. belongs to the family Amaranthaceae, is a herbaceous perennial weed growing in the hot region of India at the altitude of 3000 m. Commonly it is called as ‘Chaya’ in Hindi, ‘Bhadram’ in Sanskrit and ‘Pulai’ in Tamil. Traditionally the plant is used for the treatment of diuretic, antiparasitic, anti-helminthic 1, antidiabetic, expectorant 2, anti-microbial, cytotoxicity 3, urolithiasis, anti-inflammatory activity 4, nephroprotective 5, anti-hyperglycemic 6. A partially purified fraction of Aerva lanata was found to be protected against liver damage by acting as an antioxidant agent 7.

Canthin-6-one and beta-carboline alkaloids were isolated from Aerva lanata leave 8. The leaves of Aerva lanata are used as a sap for eye complaints, an infusion is given to cure diarrhea and kidney stone, and the root is used in the snake bite. This study aimed to investigate the phytochemical compounds and antioxidant activity.

Phytochemicals are the bioactive compounds which are responsible for the physiological action of the human body. The most significant phytochemicals include alkaloids, flavonoids, tannins, phenols, quinines, terpenoids, coumarins, etc. These phyto-chemicals act as anti-infective agents 9. Further, the extracts were analyzed for antioxidant activity. Antioxidants are the compounds which help to delay or inhibit the oxidation of lipids and other molecules through the inhibition of either initiation or propagation of oxidative chain reactions 10.

Collection of Plants: Plants for this study were collected from Chinnapaliyampattu, Tiruvannamalai district and was authenticated by Dr. Rathna Kumar, Department of plant biotechnology, Presidency College, Chennai-05.

Preparation of Extracts: Collected plants were dried at room temperature and ground to make a fine powder. 20 gm of plant powder was well dissolved in 100ml of solvents (Hexane, Ethyl acetate, and Ethanol) (ratio 1:5). The suspension was filtered by using Filter paper of pore size 0.2µm. The filtrate was then air dried, and extracts were collected in sterile vials for further use.

Phytochemical Tests: The phytochemical test of these extracts was performed using the method adopted by Harborne 11 and Sofowora 12.

Test for Saponins (Frothe’s Test): To 2 ml of plant extract, 2 ml of distilled water was added and shaken in a graduated cylinder for 15minutes lengthwise. Formation of a 1 cm layer of foam indicates the presence of saponins.

Test for cardiac Glycosides (Keller – Kiliani Test): To 0.5 ml of extract, 2 ml of glacial acetic acid and a few drops of 5% ferric chloride were added. This was under layered with 1 ml of concentrated sulfuric acid. The formation of a brown ring at the interface indicates the presence of cardiac glycosides.

Test for Terpenoids (Salkowski Test): To 0.5ml of extract, 2 ml of chloroform was added and concentrated sulfuric acid is added carefully. Formation of red-brown color at the interface indicates the presence of terpenoids.

Antioxidant Activity: The antioxidant activity of Plant extracts was determined by, the DPPH (1,1-diphenyl-2-picryl-hydroxyl) in-vitro method.

DPPH free Radical Scavenging Activity: The antioxidant activity of hexane, ethyl acetate and ethanolic extracts of Aerva lanata and the standard compound BHT was measured in terms of hydrogen donating radical scavenging ability using the stable DPPH method 13. 1 ml of the extract was added to 3.7 ml of methanol solution. After centrifugation, the supernatant is collected 200 μml of DPPH solution is added. Kept in the dark for 45 min and the resulting decrease in absorbance at 517 nm were recorded against blank using a UV-Vis Spectrophotometer. 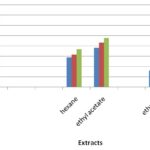 In this study percentage inhibition of free radicals was carried out with different extractions of selected plants. Ethanol extract with 75μg concentration gives a higher percentage (59.40%), Ethyl acetate extract showed the moderate activity of 47.57% and Hexane extract showed the least activity of 36.64% of free radical scavenging activity. The free radical scavenging activity increases with increase in concentration Table 2, Fig. 1. The percentage inhibition of control was found to be 81.68% which showed higher activity than the extract.

DISCUSSION: The results of the present study reveals that the ethanolic extract of          Aerva lanata showed the maximum number of components such as Carbohydrate, tannin is used for the treatment of skin eruption and bowel condition, flavonoids possess wound healing activity due to the astringent, antioxidant and antimicrobial properties which appear to be responsible for wound contraction and elevated rate of epithelisation 14, Quinones, Cardiac glycosides, phenols was found to be toxic to the growth and development of pathogens and Coumarins in the ethanolic extract when compared to other solvents.

The previous study reported, that the presence of flavonoids, tannins, anthraquinones from the stem extract of Aerva lanata 15, 16. The present work also correlates with the aforesaid studies. The ethanolic extract showed maximum antioxidant activity when compared to other solvents. Hence, the ethanolic extract can act as a maximum scavenging activity and can protect the cells from the free radicals.

CONCLUSION: The present study suggests that the Aerva lanata have maximum number of bioactive components and higher amount of antioxidant potential in the ethanolic extract; therefore the ethanolic extract may act as a significant activity and can be further analyzed for many pathogenic disorders as well as may be helpful in future for preventing or slowing the progress of diseases involved. However, it is obvious that fewer information was available further to explore this plant; more researchers should be carried out.