ABSTRACT: Arjuna is a well-known drug in Ayurveda. It is mainly used for heart disease, Obesity, and hemorrhagic disorders. It is used in various dosage form in Ayurveda such as powder, milk-based decoction, alcoholic fermented liquids, tablets, etc. Its bark is used for therapeutic purposes. Although it is widely available all over India, most of the time it is procured from the market; hence it needs to assure the quality of marketed Arjuna for standard quality formulations. Ayurvedic pharmacopeia of India (API) has given a monograph of Arjuna bark. So in this study, authentication, organoleptic, macroscopic, microscopic, and physicochemical analysis of a market sample of Arjuna was carried out. Organoleptic, macroscopic, microscopic studies have shown relatively similar characteristics as per standard. In physicochemical analysis, foreign (0.06%) matter was within normal range. Ash value (27.77%) was higher whereas acid insoluble ash (1.08%) almost matches with standard value, which shows more inorganic contents in Arjuna. Acid insoluble ash was nearly the same as a standard value. Water soluble extractive value (19.98 %) was good in studied sample which ensures its water based formulations. However alcohol soluble extractive value (17.91%) was less than standard. pH (4.85%) value is the new parameter added in this study which may be considered as reference for further study. This study added this parameter (pH) for further comparative analysis. Further qualitative, as well as HPTLC study for main marker identification and quantification, needs to carry out with more market samples from various regions in order to ensure market sample quality.

INTRODUCTION: Arjuna (Terminalia arjuna) is the most popular Dravya (Drug) in Ayurveda. Terminalia arjuna belongs to the genus Terminalia, which belongs to the Combretaceae family, and this plant is well distributed to the tropic and subtropics like warm temperature regions like Bangladesh, India, Srilanka, etc. 1 It is widely used in various formulation for therapeutic purposes. It is especially recognized for its “Hridyaa” action (Cardiac tonic).

Ayurved Pharmacopeia of India (API) has given a monograph of Arjuna. The medicinal importance of this tree is also well documented in Indian pharmacopeia, according to this its stem, bark, and leaves possess glycosides, large quantities of flavonoids, tannins and minerals 4.

Although Arjuna is widely available all over India, Ayurved Pharmaceutical industries often procured Arjuna bark from the market to meet large-scale demand. But commercialization of medicinal plants is a great concern nowadays. While providing significant scale demand, there may be a compromise with the quality of raw material.

Substitution and adulteration are prevalent due to unscientific collection practices, ignorance regarding species, unknown sources of collection, etc. Herbal adulteration is one of the common malpractices in the herbal raw material trade. Medicinal plant dealers have discovered the Scientific methods in creating adulteration of such high quality that without microscopic and chemical analysis, it is very difficult to trace these adulterations 5.

The potency of plant-based drugs depends on  maturity of plant, collection period, its territory, plant part used, Storage conditions etc. These factors are well-thought-out while drugs are field collected. However, now a day’s self-collection practice is reduced due to lack of time; hence marketed drugs are taken for pharmaceutical purposes.

Nevertheless, marketed raw drug sources are unknown, so not assured about its collection time, maturity of the drug, expiry date, and storage practices. Although many reputed pharmaceutical companies have quality control laboratories, when used for small-scale preparation, the need arises to ensure its quality. So Present study is planned to study physicochemical parameters of the market sample of Arjuna bark asper Ayurvedic pharmacopeia of India standards.

Sample of Arjuna was deposited to Repository section with voucher no S/B – 381at Agharkar Research Institute, Pune, Maharashtra as per API standards.

Authentication, Macroscopic, microscopic and organoleptic characteristics of Arjuna were done at Agharkar Research Institute, Pune, Maharashtra, as per API standards.

The bark diameter was measured with the help of vernier caliper. The mean values were taken for statistical analysis 6.

A section is cut with a razor and moisturized the surface of the bark with glycerol solution. Sections of bark are removed with a brush and place on the slide.

Physico Chemical Characteristics: Physico-chemical analysis was carried out at Agharkar Institute according to the API Appendix three times, and the mean was calculated. 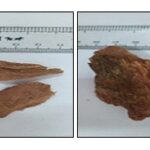 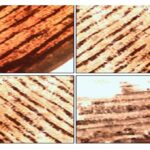 DISCUSSION: Ayurvedic pharmacopeia of India has set a standard monograph of raw drugs in order to evaluate quality of drugs. Arjuna is widely used in Ayurveda so in this study, standard parameters for Arjuna bark were evaluated. In this organoleptic character showed bark as Odourless, Taste: bitter and astringent. Although Arjuna bark showed Kashaya (Astringent) taste, predominantly bitterness is also present in Arjuna. The length, width, and thickness of the Market sample were lesser as compare to API standards. In microscopic study not more distinct characteristics are observed such as sieve tubes, companion cells, phloem parenchyma and phloem fibres in marketed Arjuna bark as compare to standard.

pH (4.85) Value of Arjuna directed its acidic nature. pH value for Arjuna is not mentioned in API. Foreign matter (0.06%) is within normal range. Ash value (27.77%) is more in the studied sample, which shows more inorganic contents in Arjuna.

Physicochemical parameters are dependent on various factors such as maturity of plant, locale, and collection of the period, etc., so even though the drug is procured from the market, strict vigilance of authority should be needed on the dealer of plant oriented drugs regarding its complete profile.

CONCLUSION: Physicochemical analysis of the market sample of Arjuna has shown relatively the same standard as mentioned in API except for Ash Value. As pH value is not mentioned in Monograph of Arjuna, this study has added pH as a new parameter. Further qualitative, as well as HPTLC study for main marker identification and quantification, needs to carry out with more market samples from various regions in order to ensure market sample quality.

ACKNOWLEDGEMENT: Author would like to thanks Dr. R.K. Choudhary Scientist, and Nambrata Gaikwad, Lab technician, Department of Biodiversity and Palaeobiology (plant), Agharkar research Institute, Pune, Maharashtra for their kind cooperation in this study.