PHARMACOLOGICAL STUDIES OF METHANOLIC EXTRACTS OF SONCHUS ARVENSIS FROM KATHMANDU

PHARMACOLOGICAL STUDIES OF METHANOLIC EXTRACTS OF SONCHUS ARVENSIS FROM KATHMANDU

ABSTRACT: Sonchus arvensis, a perennial sowthistle, is a common but underutilized species of Kathmandu, Nepal. Several uses like sedative, antioxidant and kidney stone eradicating properties have been identified till date, but a study on other pharmacological activities is not yet explored. Therefore, the plant was collected from Kathmandu; aerial parts of the plant were dried, crushed, and extracted using a Soxhlet apparatus. The methanolic extract was then concentrated for screening pharmacological effects. While comparing with the standards, the plant was found to possess potent anti-inflammatory activity and inhibitory effect in Gastro-Intestinal (GI) motility and locomotor activity in a dose-dependent fashion. The plant, however, didn’t show skeletal muscle relaxant activity as observed in the traction test and inclined plane test. Thus, it is concluded that the plant possesses strong phytochemicals having anti-inflammatory activity and inhibitory effect in locomotion and GI motility.

INTRODUCTION: In Nepal, the concept of ethnomedicine has developed since the late 19th century (1885-1901 A.D). The Royal Nepal Academy published the first book "Chandra-Nighantu regarding medical plants in 1969. Majority of the population is still dependent on botanical medicines which indicates the importance of herbal medicines in the primary health care 1, 2. Sonchus arvensis, a vigorous herbaceous perennial plant with milky sap and creeping roots is abundantly available in 1000 m to 4100 m in range and grows in sandy, loamy or clayey soils 3.

In many areas, this sow thistle is considered a noxious weed, as it becomes quickly in a wide range of conditions and it’s wind-borne seeds allow them to spread rapidly 4. Since, this plant is least explored, and there are only a few pharmacological studies, this study is done to lay a strong foundation for the future development of herbal medicines from this plant’s methanolic extract.

Sample Preparation: Samples of the plant were collected from Nagarjuna Hill, Kathmandu, Nepal; the aerial parts were then dried, crushed, and extracted using a Soxhlet apparatus. Twenty grams of the powdered material was extracted with 200 ml volumes of petroleum ether, diethyl ether, methanol, and water, each in a stepwise manner. The extracts were concentrated and stored in the refrigerator. Only methanolic extract was used for pharmacological screening. Male albino mice (30 ± 2.12 g) were used for gastrointestinal motility, spontaneous locomotor activity, skeletal motility activity tests whereas male Wistar rats (280 ± 3.43 g) for the anti-inflammatory test.

Charcoal Meal Test: Mice were divided into 4 groups of 3 mice each; the first and second group were administered 500 mg/kg and 100 mg/kg of methanol extract made in normal saline solution intraperitoneally (i.p) respectively; the third group with atropine sulfate (5 mg/kg) i.p and a fourth group with control vehicle i.p. After 30 minutes all animals were fed with 1ml of the charcoal meal (animal charcoal 12g, tragacanth 2g, and water 130ml) intragastrically with the aid of feeding needle. All the mice were killed after 30 minutes by inhalation of chloroform. The abdomen was opened, the intestine quickly isolated and the small intestine from the pylorus to caecum was cut by scissors and its length was measured by a ruler. The intestinal distance moved by the charcoal meal from pylorus was measured to calculate the percent of charcoal movement from pylorus to caecum as 5.

Spontaneous Locomotor Sctivity: 6 Mice were divided into 5 groups, each consisting of 3 mice. The first group, serving as control, received i.p the vehicle only and the second group received i.p 5mg/kg of Diazepam serving as a standard, while remaining groups were injected i.p with 125, 250 and 500mg/kg of the methanolic extract i.p. After 30 minutes of administration of extract, each mouse was placed in an open square field 50 × 50 cm surrounding and subdivided into 25 squares of 10 × 10 cm. The percentage inhibition in locomotion was calculated as:

Traction Technique: 7 Mice were divided into five groups of five mice in each. Each mouse of the first three groups was given methanolic extract i.p at the dose of 125 mg/kg, 250 mg/kg and 500 mg/kg respectively. One group received only distilled water as a control, and another group received diazepam at the dose of 5 mg/kg as a standard. After 30 min, the capability of mice to touch the wire with at least one of the hind paws within 5 seconds was observed, and the formula calculated percentage failure:

Inclined Plane Test: 7 Mice were divided into 5 groups of 4 mice each. The first group was given 125 mg/kg, methanol extract, second group 250 mg/kg methanol extract, third group 500 mg/kg, fourth group diazepam 5 mg/kg and the fourth group, i.e. control group was given distilled water only i.p. After 30 min they were placed in the inclined plane 45° for 2 min and their ability to remain at such inclination was noted.

Carrageenan Test: 8 It was studied in male Wistar rats (280 ± 3.43 g) as per the method described by Winter et al. 1962. Rats were divided into 5 groups, each consisting of 3 rats. One group serving as control received i.p the vehicle (normal saline) only, and other group received i.p 100 mg/kg of Aspirin and 10 mg/kg Diclofenac serving as the standard, while remaining groups were injected i.p with 200 mg/kg and 400 mg/kg of the Methanol extract. One hour later each animal was injected with 0.1ml of 1% carrageenan suspension in normal saline into the sub-plantar region of the right hind paw. The diameter of the paw was measured in each rat by Vernier caliper before and 3 h after carrageenan injection. The width of edema was recorded as the difference between the two readings.

The percentage inhibition of edema was calculated as:

RESULTS AND DISCUSSION: The extractive value for methanol extract was higher than for other extracts, and hence was used for pharmacological screening. Similar higher percentage yield was found for methanolic extract of S. arvensis than with other fractions 9.

In this study, the extract decreased propulsion of the charcoal meal through the gastrointestinal tract of mice dose-dependently when compared with the control group. The 500 mg/kg; intraperitoneal (IP) methanol and 5 mg/kg; IP atropine had comparable inhibitory activity in intestinal motility Fig. 1. This reduction in gastrointestinal motility by methanol extract of S. arvensis may be due to antisecretory effects. The numerous phytochemicals like tannins, polyphenolic compounds, flavonoids, quercetin and other chemical compounds may be speculated for antimotility effect 10. Hence, this activity of the plant may be useful in the treatment of diarrhoea as an antimotility agent. 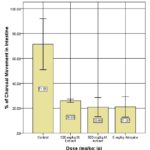 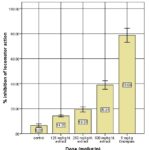 TABLE 1: EFFECT OF METHANOL EXTRACT OF ON SKELETAL MUSCLE OF MICE BY TRACTION TEST 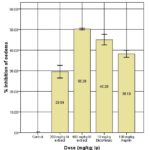 CONCLUSION: This study revealed significant anti-inflammatory, inhibitory activity on both gastrointestinal and locomotor activity. The investigation, however, showed no skeletal muscle activity. It may, therefore, be concluded from this study that the plant possessed constituents that revealed above pharmacological properties which may generate lead molecules for the development of newer drugs. However, to reach any conclusive decision a detailed phytochemical study for isolation, purification, identification, and characterization of the compound and biological studies with the exact mechanism of action responsible for the particular activity, is necessary. Hence, further scientific investigation and specific studies are highly recommended for better evaluation of the potential effectiveness of the plant.

ACKNOWLEDGEMENT: The authors are thankful to the Department of Pharmacy, Institute of Medicine, Tribhuvan University for providing laboratory and laboratory materials to conduct experiments.