INTRODUCTION: Herbal medicines have been used from the earliest times to the present day. Herbal plants are an effective source of traditional & modern medicines, useful for primary health care. From pre-historic times to the modern era in many parts of the world, plants, animals and other natural objects have a profound influence on the culture and civilization of man. Since, the beginning of civilization, human beings have worshiped plants and such plants are conserved as a genetic resource and used as food, fodder, fiber, fertilizer, fuel and in every other way 1. Today, traditional medical practice has been recognized by the world health organization (WHO) as a building block of primary healthcare. But it emphasizes the fact that safety should be the overriding criterion in the selection of herbal remedies for use in healthcare 2. Calotropis gigantea, belonging to the family of Asclepiadaceae in the plant kingdom, is the well-known plants throughout the tropical world and they are native to the tropical and subtropical parts of Asia and Africa 3.

These plants are commonly known in English as Giant Milk Weeds or Swallow-worts. This species is one of the special classes of plants that can avoid or repel the grazing animals 4. The roots and leaves of C. gigantea are used traditionally for the treatment of abdominal, tumors boils, skin diseases, wound, insect bites. A literature review showed that Calotropis gigantea contained cardenolide, glucosides, a nonprotein, amino acid, flavonoids, and steroids. C. gigantea in small dose is also useful in the treatment of cold, cough, asthma inflammatory diseases and loss of digestive and analgesic property of C. Gigantea 5-6. Milky sap is used in the treatment of boils, scabies, burns, bruises, cuts, sores, stopping the blood, and wound healing; leaves are used in chest congestion and cardiovascular conditions. The roots and barks of C. gigantea are in use for paralysis, fits, epilepsy, and convulsions in children. Shoot, leaf, roots flowers and latex extracts are reported to have antibacterial and antifungal properties by researchers. 7.

Ecology: Calotropis is drought resistant, salt tolerant to a relatively high degree, grows wild up to 900 meters (msl) throughout the country 8 and prefers disturbed sandy soils with mean annual rainfall: 300-400 mm. Through its wind and animal-dispersed seeds, it quickly becomes established as a weed along degraded roadsides, lagoon edges and in overgrazed native pastures. It has a preference for and is often dominant in areas of abandoned cultivation especially disturbed sandy soils and low rainfall. It is assumed to be an indicator of over-cultivation. 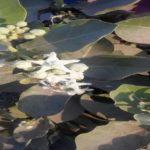 Flowers inodorous, purplish or white, 3.5-5 cm. diam., in umbellate lateral cymes; peduncles from between the petioles, 5.9 cm. long, dilated at the base; pedicels much longer than the flowers, covered with cotton wool; buds ovoid. Calyx divided to the base; sepals 6 by 4 mm., ovate, acute, cottony. Corolla 2 cm. long or more; lobes 1.3-1.6 cm. long, deltoid-ovate, subacute, revolute and twisted in age; lobes of the corona 1.3cm. long by 5 mm.

Broad in the middle, shorter than the column, the back much curved towards the column above the obtuse spur, pubescent on the slightly thickened margin, the apex rounded (not bifid) with 2 obtuse auricles just below it. Follicles 9-10 cm. long, broad, thick, fleshy, ventricose, green. Seeds numerous, 6 by 5 mm, broadly ovate, flattened, narrowly margined, minutely tomentose, brown; coma 2.5-3.2 cm. Long 9. 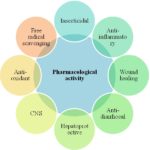 Anti-Diarrhoeal Activity: The anti-diarrheal effect of hydroalcoholic (50:50) extract of aerial part of Calotropis gigantea was studied against castor oil-induced-diarrhea model in rats. The gastrointestinal transit rate was expressed as the percentage of the longest distance traversed by the charcoal divided by the total length of the small intestine. The weight and volume of intestinal content induced by castor oil were studied by enteropooling method 21.

Hepatoprotective Activity: Ethanol extract of stems of C. gigantea was reported for hepato-protective activity in male Wistar rats against carbon tetrachloride induced liver damage. The extract resulted in significantly decreased of AST, ALT and lipid peroxide levels and showed effective protection of the liver. The extract also protects the rats from oxidative damage 22. In another study, methanolic extract of C. gigantea leaf having good hepatoprotective activity in dose-dependent manner against CCl4 induced hepatotoxicity in rats 23.

Wound Healing Activity: Wound healing activity of this plant was studied in root bark. The effects of Calotropis gigantea root bark on wound healing activity in rats was investigated by excision, incision, and dead space wound healing models. The percentage of wound closure; epithelization time, hydroxyproline content and scar area on complete epithelization were measured. Application of Calotropis gigantea in excision wound model increased the percentage of wound contraction. Scar area and epithelization time were found to be decreased. In incision wound and dead space wound breaking strength of wounds and hydroxyproline was increased 24.

CONCLUSION: It is observed from various studies that the Calotropis gigantea have some pharmaceuticals and medicinal property and according to this it is effective in the treatment of a number of diseases. Future research on sacred basil should be emphasized for control of various diseases.