PHARMACOGNOSTICAL AND PRELIMINARY PHYTOCHEMICAL SCREENING OF THE ROOT TUBERS OF CURCULIGO ORCHIOIDES GAERTN.

PHARMACOGNOSTICAL AND PRELIMINARY PHYTOCHEMICAL SCREENING OF THE ROOT TUBERS OF CURCULIGO ORCHIOIDES GAERTN.

ABSTRACT: India is well known as the emporium of medicinal plants harboring many plants of medicinal importance, of which Curculios orchioides is one that has been reported to possess medicinal importance for the treatment of various diseases traditionally as well as scientifically. An attempt was made herein to undertake a detailed pharmacognostical and preliminary phytochemical investigation of the root tubers of Curculigo orchioides Gaertn. for the first time. The pharmacognostic study comprises of the taxonomical characters of the root tubers of Curculigo orchioides, histochemical tests, and diagnostic characters. The phytochemical analysis consists of the determination of physicochemical constants, fluorescence analysis, and preliminary organic analysis. The diagnostic characters of the plant showed that the leaves are radical with parallel venation while flowers are solitary, trimerous, and ovary inferior. These parameters help in the standardization of the crude drug and in formulating Pharmacopoeial standards for the crude drug. Preliminary phytochemical screening of the crude drug showed the presence of carbohydrates and glycosides, phytosterols, fixed oils and fats, phenolic compounds and tannins, saponins, flavonoids, gums, and mucilage.

INTRODUCTION: India is well known as the ‘Emporium of Medicinal Plants.’ The use of plants to treat various diseases in India dates back to the times of Rigveda (3500 to 1800 B.C.). Later, the monumental Ayurvedic works like Charaksamhita 1 and Sushrutasamhita 2 followed by other Ayurveda and Siddha treatises have incorporated nearly 700 plant drugs entering into several medicinal preparations used in the management of health care.

These systems have been in practice even in remote areas of our country for centuries 3. India has a well established indigenous system of medicine with rich materia medica which includes herbal, animal, and mineral products. The use of herbs in India can be traced back to Vedic times; Rig veda (200-1000 B.C.) mentions the name of some medicinal herbs while the Atharva veda provides a more detailed account of herbs and the treatment of diseases. The most important and the authentic works on Indian medicinal plants are found in the classics of Ayurveda, i.e., Charaksamhita 1, Susrutasamhita 2 and Astanga hridya 4 which are believed to have been written in the pre-Buddhist period, i.e., before 600 B.C. These works incorporate 700 - 800 drugs of medicinal value used in several preparations for the treatment of various diseases.

They also serve as the basis for the medicinal plant research in India and other countries. Plants have contributed significantly to the allopathic medicinal armory. Some of the drugs used today (e.g., aspirin, codeine, morphine, vinblastine, vincristine, pilocarpine, cocaine, atropine, emetine, and ephedrine) have originated from medicinal plants 5. It has been estimated that approximately one-fourth of the prescriptions dispensed from community pharmacies in the United States contain one or more ingredients derived from plant origin 6. Around 80% of all contemporary pharmaceuticals are derived directly or indirectly from plant sources 7. According to the World Health Organization, as much as 80% of the population in developing countries are dependent on plants for primary health care 8. Statistical data reveals that as many as 3226 out of 4752 communities in India are dependent on traditional medicine derived from plants 9. A status report on Ethnobiology in India undertaken by Ministry of Environment and forests has indicated that tribal communities use over 7,500 species of plants for medicinal purposes 10.

In India, the total herbal products market, including the sale of crude drugs, has been estimated at Rs. 2500 crore, of which 50% is contributed by Classical Ayurvedic preparations and their modernized versions. This is a small percentage of the global trade estimated at $ 2000 crore. Thus, opportunities for developing modern phyto-medicines based on leads from Ayurvedic drugs are indeed vast 11. Curculigo orchioides known as Musali or Talamuli in Ayurveda is used in diseases traditionally as well as scientifically, and root tuber is used for the treatment of diabetes, leukoderma, pain and aphrodisiac 12. The diagnostic characters of the plant showed that the leaves are radical with parallel venation while flowers are solitary, trimerous, and ovary inferior. It is found in the sub-tropical Himalayas from Kumaon eastwards, Khasi Hills, Manipur, Bihar, West Bengal, Western Ghats, Konkan and Nilgiri Hills 13. An attempt was made herein to undertake detailed pharma-cognostical and preliminary phytochemical investigations of the root tubers of Curculigo orchioides for the first time 14, 15.

MATERIALS AND METHODS: The root tubers of Curculigo orchioides was collected from the Botanical garden of the University of Agricultural Sciences, GKVK Campus, Bangalore. The plant was authenticated at the herbarium of the Regional Research Institute, Bangalore and authenticated by Dr. Yoganarasimhan and a voucher specimen HS1704990020 has been retained at the School of Medical and Allied Sciences, K. R. Mangalam University, Gurgaon. The root tubers were washed with water and dried in the laboratory at room temperature (30-40 °C). The roots were ground to pass a sieve of 1 mm and further subjected to analytical parameters like ash value and extractive value.

Pharmacognostical Studies: A small quantity of the fresh root tuber was collected and preserved in tubes containing 70% alcohol for pharma-cognostical work. The macroscopical observations were carried out following reported procedures 16. The microscopical investigations, histochemical tests were carried out following the given procedures 17.  For microscopical studies, freehand sections were taken using a sharp razor. The sections were cleared by warming with a few drops of chloral hydrate, stained with phloroglucinol: HCl (1:1), treated with iodine solution and safranin. The sections were mounted temporarily in glycerine for microscopical observations. The measurement of tissues was recorded using the stage and ocular micrometers, (Erma-Japan).

Physicochemical Constants and Preliminary Phytochemical Screening: Physical constants, phytochemical tests, fluorescence studies were carried using reported procedures 18, 19, 20, 21, 22, 23. The successive extracts obtained were subjected to qualitative tests for the identification of various plant constituents. For fluorescence studies, the drug was sieved through 60 mesh, and observations were made following the reported procedures 21, 22, 23.

Microscopical Characters: A transverse section of root tuber is circular in outline and shows the following characters Fig. 1. The outer peripheral cortical portion having a starchy luster and a central stellar region (3 mm in diameter) wherein most of the vascular bundles are located. The outermost tissue is the cork consisting of 5- 8 rows of cells with light brown colored cell walls. In young tubers, the cells of this tissue are cubical to rectangular, but in older tubers, the cells are tangentially elongated. Next to the cork is the cortex containing 30 to 40 rows of large collenchymatous cells with many intercellular spaces. These cells are abundantly packed with starch grains. They are either single or in groups of 2 to 3. 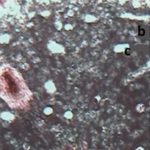 Some of the cortical cells are larger, rounded or oblong and contain bundles of raphides of calcium oxalate crystals. The raphides are acicular in shape. Within the cortex are found rounded to tangentially elongated lysigenous cavities. Small globules of mucilage are found within these cavities In mature tubers the cortical region is differentiated into a narrow outer zone (0.5-1 mm in thickness) wherein starch grains are absent and an inner wider starchy zone. The cells of the outer zone resemble those of the inner in shape, but their walls have nearly double the thickness of the latter and are slightly lignified.

A few scattered vascular bundles are also observed in cortex sometimes. Endodermis and pericycle are indistinct, but the stele is demarcated from the cortex in having ground tissue made up of parenchymatous cells. The stele is crescent-shaped and consists of numerous closed, collateral vascular bundles. The outer bundles are arranged in a ring while the inner is found scattered in ground tissue. The vascular bundles vary in size and shape and range from collateral to the amphivasal type. The xylem elements partly or surround the phloem. The cells of phloem tissue are very small and are polygonal; sieve tubes and companion cells are indistinct. A parenchymatous pith is present in the center of the stele. The measurement of various cells is provided in Table 1.

TABLE 1: MEASUREMENT OF CELLS OF DIFFERENT TISSUE (IN μm)

Histochemical Tests: The sections were treated with different reagents, and results are provided in Table 2.

Phytochemical Analysis: The organic and inorganic constituents present in a drug or plant play a significant role in the identification of of the crude drug. The physical constants like ash and extractive values help in establishing the Pharmacopoeial standards of the drug. The fluorescence analysis help to identify the drug in powder form, and the organic analysis help to understand the organic constituents of the drug.

Physical Constants: The results of moisture content, ash, and extractive values are presented in Tables 3, 4, 5, respectively.

Fluorescence Analysis: Fluorescence provided by a drug is one of the several methods used for analyzing crude drugs. Fluorescence is a type of luminescence in which the molecule emits visible radiation passing from a higher to lower electronic state. The results are presented in Table 6.

Successive Solvent Extraction: The results of successive solvent extraction were presented in Table 7.

Preliminary Organic Analysis: The results of preliminary organic analysis were presented in Table 8.

DISCUSSION: The root tuber which is the part used can be identified by the following macro and microscopical characters - tuberous root with starchy cortex; the presence of bundles of raphides made of acicular crystals; the presence of a lysigenous cavity in the ground tissue; crescent-shaped vascular bundles; the presence of pith.

Histochemical tests show the presence of starch, tannin, crystals, and lignin. The physicochemical constants of the root tuber of Curculigo orchioides were determined. It was found that water-soluble extractive (13.145% w/w) was more than alcohol soluble extractive value (9.506% w/w). These help in formulating pharmacopoeial standards for the drug.

Fluorescence analysis helps in distinguishing the drug in powder form. In the case of successive solvent extraction, the quantity of extract was found to be maximum in case of water extract and minimum in case of chloroform extract. The extract obtained by successive solvent extraction were subjected to preliminary phytochemical analysis, which revealed the presence of carbohydrates and glycosides, phytosterols, fixed oils and fats, phenolic compounds and tannins, saponins, flavonoids gums, and mucilage. The preliminary organic analysis of drug helps to undertake further studies on the isolation and identification of specific chemical constituents.

CONCLUSION: Curculigo orchioides Gaertn. (Family Hypoxidaceae) commonly known as Musali or Talamuli in Ayurveda is an important drug of Ayurveda and Siddha system of medicine. The root tuber is used in a disease like diabetes, pain, leukoderma, skin troubles, demulcent, and useful in diarrhoea. In the present study pharmacognostical, phytochemical investigations on the root tuber of C. orchioides were carried out.