INTRODUCTION: Plants plays an important role in the maintenance and support of other biological life. Plants also have a vital role in the treatment of diseases. Pharmacognostical and phytochemical evaluation of plants is important for their identification among other species or verities. Trichosanthes species are coming under the family Cucurbitaceae. There are about 110 genera and 640 species in the Cucurbitaceae family.

Collection and Authentication: Trichosanthes cucumerina var. cucumerina L. was collected from Kondotty, Malappuram district in Kerala. The plant material collected from September to December. Authentication carried out by A. K. Pradeep, Assistant Professor, Department of Botany, University of Calicut and the voucher specimen number CU 86996, has been submitted in the  Calicut University Herbarium, University of Calicut.

Microscopic Studies: Microscopic studies of the plant were carried out in fresh leaves of Trichosanthes cucumerina var. cucumerina L. Plant sectioning is done in the midrib region of the leaf. The transverse section is taken by the freehand method. Thin sections are collected and treated with phloroglucinol and hydrochloric acid in 1:1 ratio for the staining of the section. Stained sections were mounted in grease free glass slide by using glycerine and observed under a microscope.

Powder Microscopy: Dried leaves are powdered to get fine particles. Fine powder treated with phloroglucinol and hydrochloric acid in equal amount. Stained powder sample mounted with glycerine and covered with a coverslip in a grease-free microscopic slide with the help of a needle.

Determination of Leaf Constants: Leaf constants includes stomatal number, stomatal index, vein islet number, and vein termination number. Leaf constant studies are carried out in the leaves by means of pealing the epidermal layer and mounted with glycerine. The study is carried out with the help of camera Lucida 19.

Determination of Ash Values: Total ash value consists of physiological ash which is derived from the plant tissue itself and non-physiological ash derived from the adhering material in the plant surface. Accurately weighted 2.5 gm of dried leaves were placed in a crucible. The leaves spread as a layer and ignited to get constant weight by gradually increasing the heat to 500-600 °C using a muffle furnace.

Determination of Extractive Values: Alcohol-soluble extractive value amount of plant compounds which get solubilized in ethanol by keeping powdered plant material for 24 h. Water-soluble extractive value percentage of plant compounds which are solubilized in water is calculated by keeping plant material in chloroform-water (5% chloroform in distilled water). 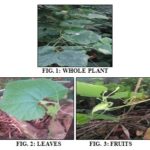 Leaves are alternate, simple, hairy, 7-15 cm length and 10-15 cm in width. 5-7 lobed, the base is broadly heart shaped. Fruits are cylindrical with the waxy surface, slender and tapering. 5-7 cm in length and 2-3 cm in diameter. The fruits are bitter and used as an emetic. Roots are tuberous with the long and thick tap root system. The thickness of the root is due to the storage of food and water.

Lamina: Upper epidermal cells are single layered rectangular cells. Covered with cuticle and contains numerous covering trichomes. The covering trichomes are uniseriate, multi-cellular (3-4 celled) with a stalk and base and having blunt tips. 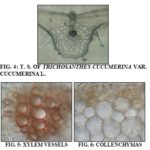 Mesophyll: Mesophyll is divided into palisade and spongy parenchyma. Palisade cells are elongated and single layered and compactly arranged which discontinued over midrib. Spongy parenchyma consists of loosely arranged parenchymatous cells of 4-5 layers. Vascular elements are arranged in 3-4 layer. The lower layer is single-layered with rectangular epidermal cells. Trichomes also present in this layer

Midrib: Dorsal surface is strongly convex and epidermal layer is continuous in lamina and midrib region. Epidermal layer present in both lower and upper epidermis. Arch shaped vascular bundles and are bicollateral (xylem cells covered with phloem cells in both sides) in nature. 4-6 layers of collenchyma cells are present below the upper epidermis and above the lower epidermis. 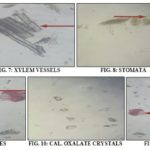 Trichomes: Uniseriate, multi-cellular, straight and having a blunt tip.

Calcium Oxalate Crystals: In the form of square-shaped prismatic crystals. 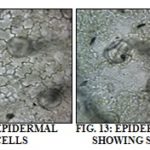 Stomatal Index: Percentage of a number of stomata formed to the total number of epidermal cell. Stomatal index calculated by the following equation:

Determination of Loss on Drying: Moisture content of dried leaves of Trichosanthes cucumerina var. cucumerina Linn. was found to be 13.5 ± 0.08.

Extraction of Leaves: 100 gm of coarsely powdered leaves of Trichosanthes cucumerina var. cucumerina L. was subjected to continuous hot extraction in Soxhlet apparatus by using ethanol. After completion of the extraction the extract obtained was concentrated under vacuum by using rotary vacuum evaporator.