ABSTRACT: Oroxylum indicum Vent., Bignoniaceae is one such plant which is extensively used in the Indian system of medicine as an essential ingredients ‘Dashmula’ and also one of the important constituents of a reputed Ayurvedic formulation ‘Chyavanprash.’ The drug consists of root bark of Oroxylum indicum Vent., Bignoniaceae. Identification and quality of the raw drug are necessary for their therapeutic effects. It is, therefore, become essential to search for the possible quality control parameters to ensure the quality of the raw drug by pharmacognostical investigations. The microscopical character of root bark is characterized by cork cells, which are varying interrupted by some stone cell, cork cambium, phelloderm, stone cell. Powder of root bark shown stone cells, fragments of cork, phloem fibers, vessels, and tracheids. TLC of extract shown spots in the solvent system and physicochemical parameters of the plant was found like ash value, aqueous & alcoholic extractive value, total sugars, starch, and tannin.

INTRODUCTION: Oroxylum indicum Vent., is an important medicinal plant which belongs to family Bignoniaceae. The Bignoniaceae is a family who is having about 100 genera and 800 species 1. In Ayurvedic literature, it is known as ‘Shyonak’ or Sonpatha and in English as Trumpet flower tree. It is small and deciduous tree, branched at top, bark light brown, soft and spongy; leaves large pinnate, bipinnate, or tripinnate ovate or elliptic; flower purple, fleshy; capsule large, flat, sword-shaped and seed flat and papery. It comes under Brihatpanchmoola of Dashmoola. It is also one of the important ingredients of Chyavanprash’, the most popular and highest market valued herbal preparation.

In view of its diverse medicinal applications, and in order to ensure the quality of its supply, especially in the times of adulteration and substitution prevailing on the crude drug markets of India, the present communication deals with detailed quality control parameters of the root bark of Oroxylum indicum Vent, Bignoniaceae collected from different geographical zones of India.

Plant Material: The shade dried root bark of Oroxylum indicum Vent., Bignoniaceae, were collected from Chitrakoot (Madhya Pradesh), India. These were identified and authenticated taxonomically at National Botanical Research Institute, Lucknow, India. A voucher specimen was deposited in the Institutional herbarium for future reference. The plant materials were further size reduced and stored until further use in an airtight container. Fresh plant material was obtained for macroscopical and microscopical evaluation.

Chemicals: All chemicals used were of analytical grade from MERCK and SD Fine Chemicals Ltd.

Macroscopic and Microscopic Analysis: 27 The microscopy of the plant was studied according to the methods of Johnson (1940), T.S. and T.L.S. were prepared and stained.

Physico-Chemical Analysis: 28, 29, 30 The air-dried plant material was used for quantitative determination of physicochemical parameters such as the percentage of total ash, insoluble acid ash, water, and alcohol-soluble extractives were calculated according to methods described in the Indian Pharmacopoeia. The percentage of sugar, starch, and tannins were also calculated using a spectrophotometer.

TLC Fingerprinting: 1 g of powdered root bark was refluxed for 5 min on a water bath with 5 ml methanol, filtered, and the filtrate taken as test solution and was then applied on HPTLC precoated silica gel G60 F254 Merck glass plates of 4x10 cm with the help of a Camag Linomat-IV applicator and the plate eluted to a distance of 6.20 cm at room temperature (19 °C) in a solvent system of Toluene, Ethyl acetate and Acetic acid (5:5:0.1) and scanned at 366 nm.

Macroscopic Characters: The root bark of Oroxylum indictment. Bignoniaceae is yellowish brown having a characteristic odor and sweet mucilaginous in taste with fine longitudinal striation, external and internal surface smooth, and fracture short and splintery Fig. 1 and Fig. 2. 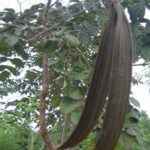 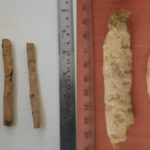 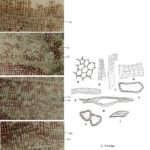 Physico-Chemical Analysis: The physicochemical parameters of Oroxylum indicum Vent, Bignoniaceae such as the percentage of total ash, acid insoluble ash, water and alcohol-soluble extractives, total sugars, starch, and tannin were shown in Table 1.

CONCLUSION: The root bark of Oroxylum indicum Vent, Bignoniaceae is equated as a drug in the name of ‘Shyonak’ an important component of 'Dashmoola.' The market samples of the drug, however, consist of the majority of the stem bark pieces only, hence a well-established quality control parameters are highly essential for the plant. It is popular for its medicinal properties in the indigenous system of medicine, and some of its traditional claims have been scientifically validated.

In the present communication, the macroscopical and microscopical findings will lay down the standards which will be useful for the detection of its identity and authenticity. The other parameters viz., ash values, extractive values, total sugars, starch percentage, and TLC fingerprinting add to its quality control and quality assurance. Thus, the above findings will serve the purpose of quality control and assurance for the future studies.