INTRODUCTION: Inflammation is an immune system response to protect the body from infection. Inflammation occurs when white blood cells migrate out of blood vessels into the infected area, where they act as phagocytes (destroyers of foreign matter). The white cells can also wall off the infected area, preventing its spread to other parts of the body. A secondary aspect of inflammation involves the movement of protein containing fluids to the affected area. The dilation of upstream and constriction of downstream blood vessels to the infected area results in a loss of blood plasma at the site, which leads to swelling. Pain results from the compression of nerve endings, the swelling causes. Inflammation progresses through four stages: Redness, Heat, Swelling, and Pain.

Inflammation can also bring on general flu-like symptoms such as fever, chills, fatigue, loss of energy and headaches. Inflammation as a response to injury is non-specific in that it occurs identically regardless of the situation that prompts it. Inflammation is a necessary and integral part of the immune system. However, excess or chronic inflammation can be damaging to our health. Recent research indicates that inflammation may be a major contributor to atherosclerosis, Alzheimer's disease, and some cancers. Excessive inflammation is a by-product of many diseases.

Martynia annua Linn. is commonly known in Ayurveda kaakanassikaa belongs to family Martyniaceae. It small herb found in throughout India, and it is native of Mexico. In Ayurveda, the plant is known as kakanasika, which is being used in Indian traditional medicines for epilepsy, inflammation, and tuberculosis. The leaves and fruits are a biologically active part of this plant. The leaves of the Martynia annua are edible and used as antiepileptic and antiseptic, applied locally to tuberculosis glands of the neck, the juice of the leaves as a gargle for sore throat and the leaf paste for wounds of domestic animals 12. It is herbaceous, stout, erect, branched, clammy pubescent, annual plant growing to a height of 90 - 120 cm. Found throughout India, in waste places, rubbish heaps and along roadsides.

The fruit is considered alexiteric and useful in inflammations while ash of fruit mixed with coconut oil applied on burns. The fruits of M. annua used as a local sedative and also used as an antidote to scorpion stings to venomous bites and stings. Seed oil applied on abscesses and for treating itching and skin affections. The Ayurvedic Pharmacopoeia of India recommended the seed of M. annua for arresting of graying of hair 15.

Preparation of Extracts: The leaves of Martynia annua was collected, washed and dried at room temperature. Leaves were ground into the fine powder, extracted with different solvents in decreasing order of solvent polarity, i.e. petroleum ether (40-60 ºC), chloroform and methanol. The extract was dried in a vacuum oven to obtained constant weight.

Anti-inflammatory Activity by Carrageenan-Induced Paw Edema Method: The technique is based upon the ability of anti-inflammatory agents to inhibit the edema produced in hind paw of the rat after injection of an irritant. Adult Swiss albino mice of either sex were divided into six groups. Animals fasted overnight. The control mice received vehicle (1% dimethyl 1 formamide in water for injection) and subplantar injection of 0.1 ml of 1% suspension of carrageenan with 2% gum acacia in normal saline was given in right hind paw of mice 1h after oral administration to test animals pet. ether extract, chloroform extract and methanol extract at dose of 50 mg/kg b.w, 100 mg/kg b.w, 200 mg/kg given orally. Pentazocine was given intraperitoneally (25 mg/kg body wt).

The paw was marked with ink and immersed in water cell of plethysmometer up to the mark. The paw volume was measured by plethysmometre (Medicaid digital vol. metre) at 1, 2, 3 h after carrageenan injection. The difference between '0' readings and after 1, 2, 3 h readings was taken as the volume of edema. The paw volume for the control group was then compared with the test group. 90% Inhibition will be calculated using,

A P value < 0.01 was significant. The methanol extracts exhibit greater anti-inflammatory activity as compared to petroleum ether and chloroform extract of the plant of Martynia annua. 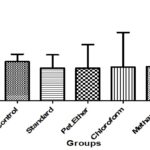 ACKNOWLEDGEMENT: Author is thankful to all dear Friends who involved in research work and also thankful to Kasturi Shikshan Sanstha’s College of Pharmacy for giving continuous support for doing this work.