ABSTRACT: As per the appeal issued by World Health Organization (WHO) "save plants to save lives," there is the need for a global movement for the conservation of medicinal plants and the revitalization of the native health traditions of local communities. Such health traditions based on medicinal plants are the result of centuries of observation, selection, and experimentation. They thus constitute an accumulated pool of medical wisdom, based on the dictum "an ounce of practice is worth tons of theory." Unfortunately, such invaluable knowledge and experience are increasingly coming under the category of 'dying wisdom.' Throughout human history people have relied on natural products and plants, in particular, to promote and maintain good health and to fight sickness, pain, and disease. The past 200 years have witnessed not only an acceleration in the rate of extinction of plant and animal species but also the erosion of traditional knowledge related to the medicinal properties and uses of the plant and other natural products. India also had a rich tradition for primary healthcare, but due to the lack of systemic study and documentation, this traditional knowledge was lost forever. But somehow the practical application of such knowledge can be met with a few routine practices among local populations in Kerala, a southern state of India. The present paper deals with the pharmacognostic analysis of two simple and effective healthcare measures for digestion and digestive problems using Murraya koenigii leaves.

INTRODUCTION: The global crisis in health care is deepening. For the majority, affordable quality healthcare seems a distant dream. Healthcare systems need to understand the complex interplay of biology, behavior, socioeconomic and environmental factors that shape health. These factors cannot be considered in isolation from each other.

Planning effective treatment of disease requires addressing them all together, fully and integrated 1. The integrated approach includes the application of modern medicine as well as technologies to study and treat diseases based on traditional, complementary, alternative medicines.

India is known to be a Country of a rich source of traditions and traditional healthcare practices among other eastern Countries of the world.  Kerala had a strong traditional knowledge system based on Ayurveda, and a traditional physician was found practiced in each village in Kerala. But unfortunately, due to lack of systematic study and documentation, most of the traditional knowledge has been lost forever. But somehow the practical application of that knowledge can be met with a few habitual practices among local populations in their daily life for regular disorders. Leaves of M. koenigii commonly called curry leaves are a popular leaf-spice used in very small quantities for their distinct aroma due to the presence of volatile oil and their ability to improve digestion. “Let food be your medicine and let medicine be your food.” Herbal and natural products of folk medicine/ traditional medicine have been used for centuries in every culture throughout the world.

Scientists and medical professionals have shown increased interest in this field as they recognize the true health benefits of these remedies. The important advantages claimed for therapeutic uses of medicinal plants in various ailments are their safety besides being economical, effective and their easy availability. Its leaves are widely used in Indian cookery for flavouring foodstuffs 2. The present study attempts to evaluate two such practices using Murraya koenigii (L.) Spreng for Digestion and Digestive disorders.

Review of Literature: The curry leaf tree is native to India, Sri Lanka, Bangladesh, and the Andaman Islands. Later spread by Indian migrants, they now grow in other areas of the world where Indian immigrants settled and the leaves are particularly associated with South Indian cuisines 2. The leaves of M. koenigii are reported to have a great medicinal value such as antibacterial, anti-inflammatory, antifeedant, etc. 3 The two such customary practices include the use of leaves of M. koengii along with buttermilk.  It is found having slightly squeezed leaves of M. koenigii put in butter milk after a heavy lunch for digestion.

In case of stomach problems and digestive disorders the usual practice of taking buttermilk boiled with leaves of M. koenigii and rhizomes pieces of Curcuma longa L. for one or two days. For the study, these two preparations were made and the pharmacognostic analysis of M. koengii leaves was carried before and after making drug preparations. The phytochemical profiling of leaves was also recorded using HPTLC. The anatomical structure and position and size of stomata associated with oil cells support the use of leaf in fresh. The same aroma, as well as flavour due to this essential oil in the preparation even after the removal of leaf, shows its volatile and miscible nature. The chemical constituents in the essential oil of M. koengii leaves are reported 4 including sabinene, β caryophyllene, α pinene, β phellandrene and traces of terpinene, linalool, ocimene, etc.

RESULTS AND DISCUSSION: Essential oils are aromatic oil obtained from plant materials. They are secondary metabolites of various parts of plants and are derived from terpenes and their oxygenated compounds. The essential oil has been shown various therapeutic benefits. Essential oils shown antibacterial, antifungal, antiviral, insecticidal and antioxidant properties. They are used in aromatherapy, food preservation and fragrance industry 5. The aroma and flavour of leaves of M. koengii are due to the presence of highly volatile essential oil. The leaves of M. koenigii are also reported to have a great medicinal value such as antibacterial, anti-inflammatory, antifeedant, etc. 3

The anatomical studies show the presence of more oil cells containing oil globules near the stomatal area and this in turn aid their easier outward movement while preparations. This effective use of this principle can be used in the traditional healthcare practice of having preparations using slightly hand squeezed leaves in raw as well as boiled buttermilk for digestion and digestive disorders. The highly volatile oil present in the leaves of M. koengii during preparations absorbed by the liquid (Buttermilk) in contact. The Plate 1 shows the pharmacognostic profile and Plate 2 shows the TLC profile of M. koenigii leaf.

Morphology: The leaves of M. koengii Plate 1B are the leaflets as the plant has compound imparipinnate leaf  of 12 to 22 cm in length and 4 to 5.5cm in breadth; rachis slender and pubescent; petiolule slender, terete, 1 or 2 mm in length; leaflet 10 to20, alternate, ovate, lanceolate or rhomboid, 2 to 4.5 cm in length and 1 to 2.4 in breadth, margin crenulate, base obliquely subcuneate, tip obtusely acuminate, minutely notched, dull green dorsally and greenish white ventrally when dry, with characteristic odour and taste; veins 3 to 6 pairs alternate, reticulate, not prominent on both sides; texture, papery to subcoriaceous and slightly brittle when dry.

Anatomy: The anatomical structure of M. koengii leaf 6, 7, 8 studied and shown in the Plate 1C-F. The pharmacognostic and phytochemical studies of M. koengii leaf reported 3 its high range of stomatal number (67-82) as well as a stomatal index (13.47-15.42) were also observed in this study. The detailed anatomy of various components of leaf-like rachis and leaflet are:

Lamina: TS shows both the adaxial and abaxial epidermis covered by a cuticle; abaxial epidermal cells narrow and laterally elongated while those on adaxial surface slightly radially elongated; palisade biseriate, concentric starch grains of 3 to 5µ diameter are found in spongy cells, spongy parenchyma made up of loosely arranged chlorenchyma; lysigenous cavities present; epidermal cells of lamina in surface view are elongated, straight walled and polygonal; in costal region they are elongated and thin-walled; stomata more on abaxial surface than on adaxial; paracytic; stomatal index of abaxial epidermis 16 to 18 and of adaxial epidermis 13 to 15; unicellular, non glandular, gradually tapering, curved trichomes measuring 80 to 160 µ long and 6 to 15 µ broad are distributed on the abaxial epidermal layers; trichomes numerous on costal region and fewer on intercostal regions, leaving cicatrices after detachment. 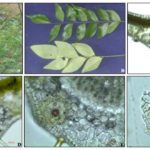 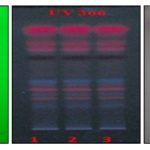 CONCLUSION: The healthcare tradition mentioned in the study is simple and effective. It is found using as a customary practice in 75 families in three districts of Kerala. The presence of oil and glandular dots on the surface of leaves gives the aroma for the leaf. The anatomy of the leaf shows the presence of abundant oil cells containing oil globules near stomata and this aid in the mixing of oil in the medium of intake like buttermilk. The reduction in the oil content after processing shows the transmission of essential oil to the medium used in the traditional preparation of buttermilk. The acidic nature of the buttermilk also helps in the easier absorption of the oil in the leaf. So this can be accepted as a scientific, effective primary healthcare measure.

AKNOWLEDGEMENT: The authors are grateful to Arya Vaidya Sala, Kottakkal for providing research environment as well as the necessary support to carry out this work.