ABSTRACT: The plant of Desmodium triflorum Linn (Fabaceae) is reported to have great medicinal value. The aim of this study to evaluate pharmacognostic evaluation including examination of morphological characters, ash value, powder analysis, and extractive values was carried out. Phytochemical screening including chemical examination and chromatographic study were also carried out. This would help to scientifically justify its pharmacological activities of particular chemical constituents in different extracts. 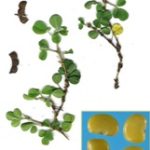 MATERIAL AND METHODS: The present section deals with the detailed description of various methods and techniques employed for carrying out different studies categorized into the following heading.

Collection and Authentication of the Plant Leaves: The leaves of Desmodium triflorum were collected from outfield medicinal garden near to Gwalior (Madhya Pradesh) that show the green color with the rough surface. The plant leaves were washed thoroughly in tap water, dried in the shade, finely powdered and used for extraction. The plant was identified, and herbarium specimen was submitted in the Department of Pharmacognosy for future references.

Extraction of Plant Material: Extraction is the separation of medicinally active portions of plant tissues using selective solvents through standard procedures. The extraction was done by following the general procedure. Powdered material (leaves) was packed in soxhlet apparatus. The drug was defatted with petroleum ether (60-80 °C) for about 30-35 complete cycles. Defatted material was subjected to further extraction process by dichloromethane, methanol, and water. All the extracts were concentrated under vacuum. After completion of the total, the extracted powder was discarded and the extracts so obtained were further processed. The excess solvent in the extracts was removed by distillation and the concentrated extracts so obtained were also dried at a temperature not exceeding 40 ºC in the water bath. The extracts were then collected kept in Petri dish and stored in desiccators at room temperature. The yield values and other physical properties were observed 10.

The % Yield of the Petroleum ether, dichloromethane, Methanol, & Aqueous extract was calculated by using the following formula.

Determination of Physico-Chemical Parameters: Various physicochemical parameters were analyzed for the confirmation of identity & purity. The extractive values with alcohol and water were also determined.

Moisture Content: Moisture is an inevitable component of crude drugs, which must be eliminated. The moisture content should be minimized to prevent decomposition of crude drugs either due to chemical changes or microbial contamination.

The powdered sample of H. rosa-sinensis and C. gigantea was weighed accurately and kept in IR moisture balance. The loss in weight was recorded as percentage moisture concerning an air-dried sample of crude drug 10-11.

Fw = Final constant weight of drug along with the container

I. Total Ash Value: For the determination of total ash, 2 gm of the air-dried crude drug was weighed in the tarred silica dish and incinerated at a temperature 450°C until free from carbon in Muffle furnace and then was cooled and weighed. The residue was collected on an ashless filter paper and then incinerated until the residue is white or nearly so. The percentage of ash was calculated concerning the air-dried drug.

II. Acid-Insoluble Ash Value: The ash obtained from the previous process was boiled with 25 ml of 2M HCI for 5 min. and the insoluble matter was collected on ash-less filter paper and was washed with hot water, ignited, cooled in a desiccator and weighed. Percentage of insoluble acid ash was calculated concerning the air-dried drug.

III. Water Soluble Ash: The ash was boiled with 25ml of water for 5 min. and the insoluble matter was collected on ash-less filter paper and was washed with hot water, ignited for 15 min. at a temperature not exceeding 450 °C. The weight of the insoluble matter was subtracted from the weight of the ash, and this represents the water-soluble ash. Percentage of water-soluble ash was calculated with reference to the air-dried drug 10-13.

Phytochemical Screening: Preliminary phyto-chemical screening was performed for all the extracts 14-15.

Detection of Carbohydrate: 500 mg of extract was dissolved in 5 ml of distilled water and filtered. The filtrate was used to test the presence of carbohydrates.

Molisch’s Test: To 1 ml of filtrate, 2 drops of Molisch’s reagent was added in a test tube, and 2 ml of concentrated sulphuric acid added carefully along the side of the test tube. Formation of a violet ring at the junction indicates the presence of carbohydrate.

Fehling’s Test: To 1 ml of filtrate, 4 ml of Fehling’s solution was added in a test tube and heated for 10 min in a water bath. Formation of red precipitate indicates the presence of reducing sugar.

Detection of Glycosides: 0.5 gm of the extract was hydrolyzed with 20 ml of dilute hydrochloric acid (0.1 N) and filtered. The filtrate was used to test the presence of glycosides.

Modified Borntrager’s Test: To 01 ml of filtrate, 02 ml of 1% ferric chloride solution was added in a test tube and heated for 10 minutes in a boiling water bath. The mixture was cooled and shaken with an equal volume of benzene. The benzene layer was separated and treated with half of its volume of ammonia solution. Formation of rose pink or cherry color in the ammonia layer indicates the presence of glycoside.

Killer Killian Test: A small portion from the respective extracts was shaken with 1 ml glacial acetic acid containing a trace of ferric chloride. 1 ml of conc. Sulphuric acid (H2SO4) was added carefully by the sides of the test tube. A blue color in the acetic acid layer and red color at the junction of the two liquids indicate the presence of glycosides.

Detection of Alkaloids: 0.5 gm of the extract was dissolved in 10 ml of dilute hydrochloric acid (0.1 N) and filtered. The filtrate was used to test the presence of alkaloids.

Detection of Protein and Amino Acid: 100 mg of each extract was taken in 10 ml of water and filtered. The filtrate was used to test the presence of protein and amino acids.

Millon’s Test: 2 ml of filtrate was treated with 2 ml of Million’s reagent in a test tube and heated in a water bath for 5 min, cooled and added a few drops of Sodium Nitrate solution. Formation of white precipitate, which turns to red upon heating, indicates the presence of proteins and amino acid.

Ninhydrin Test: To 2 ml of filtrate, 0.25% Ninhydrin reagent was added in a test tube and boiled for 2 minutes. Formation of a blue color indicates the presence of amino acids.

Biuret Test: 2 ml of filtrate was treated with 2 ml of 10% sodium hydroxide solution in a test tube and heated for 10 min. A drop of 7% copper sulphate solution was added in the above mixture. Formation of purplish violet color indicates the presence of proteins.

Detection of Fixed Oils and Fats:

Oily Spot Test: One drop of each extract was placed on filter paper, and the solvent was allowed to evaporate. An oily stain on filter paper indicates the presence of fixed oil.

Detection of Phenolics and Tannins: 100 mg of each extract was boiled with 1 ml of distilled water and filtered. The filtrate was used for the following tests.

Ferric Chloride Test: To 2 ml of filtrate, 2 ml of 1% ferric chloride solution was added in a test tube. Formation of bluish black color indicates the presence of the phenolic nucleus.

Alkaline Reagent Test: To 100 mg of extract, few drops of sodium hydroxide solution were added in a test tube. Formation of intense yellow color that becomes colorless on the addition of a few drops of dilute acid (HCl) indicates the presence of Flavonoids.

Foam Test: Extracts were diluted with distilled water to 20 ml and Shaken in a graduated cylinder for 15 min. Formation of one cm layer of foam indicates the presence of Saponin.

Detection of Mucilage: 10 ml of the aqueous extract was tested for mucilage; the extract was added with 25 ml of 95% alcohol with constant stirring. The so formed precipitate was centrifuged and washed with alcohol, the dissolved in water (10 ml) and reprecipitated. After washing the precipitate was collected & dried in desiccators. On addition of a drop of water and allowed to stand for some time, it swelled to give a viscous mass which indicated the presence of mucilage.

TLC of Methanolic Extract of Desmodium triflorum: TLC for the separation of various bioactive compounds from bioactive extract, the methanolic extract was developed to find out the probable number of compounds present in them. On the pre-coated TLC plate, test samples (after dissolving in respective solvents) were applied in the form of spots with the help of fine capillary. Spots were marked on the top of the plate for their identification. Rectangular glass chambers were used for chromatography. To avoid insufficient chamber saturation and undesirable edge effect, a smooth sheet of filter paper was placed in the TLC chamber and was allowed to be in the developing solvent. A number of developing solvent systems were tried during the study. Each time plate was sprayed with Vanillin sulphuric acid and heated at 115 ºC for 5 min. The solvent system in which there is a satisfactory resolution was taken as a final solvent system. Solvent systems; Ethyl acetate: methanol: water (76:20:4) was found to be the most satisfactory solvent system. After the development of plates, they were air-dried and a number of spots, color and Rf values were recorded 10.

TABLE 1: DIFFERENT EXTRACTS WITH THEIR APPEARANCE AND % YIELD (IN gm) 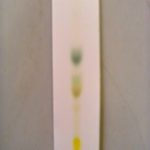 ACKNOWLEDGEMENT: The work was supported by the Department of Pharmacology, G R Medical College, Gwalior M.P. India. I would like to thanks Dr. S.C. Mehta for providing a platform to carry out this work.