ABSTRACT: Strobilanthes sessilis Nees is a small perennial shrub, found on Kas plateau of the Western Ghats in India. Its standardized Marathi name is Mal Karvy. This shrub belongs to the genus Strobilanthes which was first scientifically described by Nees in the 19th century. Scientific information on its Pharmacognosy, Phytochemistry is very scant. Hence, the current study describes some Pharmacognostical, Physiochemical and Phytochemical investigations undertaken on the leaves of one of the species of the genus Strobilanthes, namely Strobilanthes sessilis Nees belonging to the family Acanthaceae. The present investigation was undertaken for research with an objective of drawing attention on those scarce species as well as a reference for further scientific investigations.

INTRODUCTION: Strobilanthes is a genus of about 250 species of flowering plants in the family Acanthaceae. The name Strobilanthes is derived from the Latin words ’Strobilos’ meaning cone and ‘anthos’ meaning flower or shoot, mostly native to tropical Asia and Madagascar, but with a few species extending north into temperate regions of Asia. Many species are cultivated for their 2-lipped, hooded flowers in shades of blue, pink, white and purple. Most are frost-tender and require protection in frost-prone areas 1. This plant was first scientifically described by Christian Gottfried Daniel Nees von Esenbeck in the 19th century, and most of these species show unusual flowering behavior, varying from annual to 16-year blooming cycles, on the national scale, there is often confusion about which plant is flowering.

While the leaves of Strobilanthes sessilis are poisonous, toxic and unfit for human consumption, it is used as a traditional medicine herb by the local adivasi tribal’s and villagers for the treatment of inflammatory disorders. The plant has been the subject of scientific research which confirms its use in folk medicine as a valid anti-inflammatory. 2, 3, 4 The Betulin, Lupeol, lupenone, β- sitosterol isolated from the roots showed anti-inflammatory activity. The volatile oil obtained from the flowering tops has Antifungal activity. 5, 6

The assignment such as macroscopy, anatomical studies, preliminary phytochemical screening, and physiochemical analysis was performed since the species was not noted for its pharmacognosy and bioactivity in the past. The perusal of literature also revealed that limited pharmacological, phytochemical and pharmacognostical work had been done on the plant Strobilanthes sessilis Nees.

Plant Collection: Strobilanthes sessilis Nees was procured from the grasslands of Kas plateau, Western Ghats of India. The specimen was authenticated   by comparing with the voucher specimen deposited in the Department of Botany at Y.C. Institute of Satara.

Fresh leaves were shade dried and made into powder and then was used for physiochemical, phytochemical analysis and powder characteristics. Fresh leaves were preserved in formaldehyde-acetic acid-ethanol (1:1:1).

Extraction: The leaves were dried at room temperature and screened for the presence of foreign matter. The leaves were ground to a moderately coarse powder in a mechanical grinder. About 500 g of the powder was extracted successively with petroleum ether, Chloroform, methanol, water using Soxhlet apparatus. The three different extracts were taken in a tarred porcelain dishes and evaporated to dryness on a rotary evaporator and dried to a constant weight. The percentage of extractives were calculated concerning air-dried drug 7.

Macroscopic Characteristic: It is a simple determination technique which includes organoleptic studies like shape, size, color, odor and its extra features. The macro morphological features of the leaf were observed under a magnifying lens 8, 9.

Microscopy Characteristic: Anatomical section of the leaf is studied through taking a thin section through the midrib taken perpendicular to the midrib and observation of surface preparation. In case of bilateral leaf either surface may be observed, but in case of a dorsiventral leaf, the lower epidermis is more important, bearing the stomata, guard cells. Observation of section through midrib (T.S.) reveal the morphology of leaf 10, 11.

Powder Characteristic: The leaves dried in the shade were finely powdered and screened for the presence of its own and foreign vegetative matters. The powder was passed through a sieve no. 125 and a sieve no. 180, separately, to obtain fine and very fine powder respectively and then subjected for microscopic examination. The sample was treated with the following reagents like Phloroglucinol (2% w/v) in ethanol (90%) and conc. HCl (1:1) 12.

Physicochemical Analysis: Physico-chemical analysis, i.e. percentage of ash values and extractive values were performed according to the methods prescribed in Indian Pharmacopeia 13.

RESULT: Strobilanthes sessilis Nees, also known as Mal Karvy found on grasslands of kas plateau, Western Ghats of India were studied and its Pharmacognostic and preliminary phytochemical screening is carried out and result obtained are as follows Fig. 1. 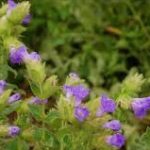 Macroscopy of Leaf: The morphology of the plant showed characteristic features of Table 1.

Microscopy: Transverse section of the leaf through midrib, a show following characteristic. Leaf is Dorsi-ventral in nature. Upper epidermis is covered by thin cuticle. Both the epidermis show Diacytic stomata. Multicellular covering trichomes are abruptly present on both epidermis. 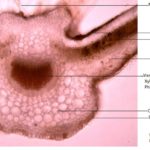 Upper Epidermis: Upper epidermis is composed of tangentially arranged single layer of sub-rectangular cells below this the projection area with collenchmatous cells is present.

Palisade Layer: Palisade parenchyma is composed of elongated and capsule shaped cells which are closed together to each other which form long axes of cells perpendicular to the epidermis.

Lower Epidermis: It consists of a single layer of tangentially arranged sub-rectangular cells with smooth cuticle. Just above the lower epidermis three to four layers of collenchymatous cells are present. 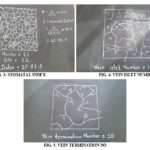 Powder Characteristics: The powder was pale green; with a strong odor; slightly bitter; smooth and slippery in texture. The epidermis has stomata, which are diacytic or in nature. The epidermal cells are polygonal and rectangular with thin, straight, walls. An abundant number of multicellular trichomes. Also the presence of xylem vessels (Lignified and Non-lignified)

Preliminary Phytochemical Test: Various extracts of Strobilanthes sessilis Nees plant analyzed systematically for the different chemical groups. The extracts showed the presence of phytoconstituents such as flavanoids, steroids, cardiac glycoside. The results were shown in Table 5.

DISCUSSION: The genus Strobilanthus belonging to the family Acanthaceae has around 350 species, of which at least 46 are found in India. Strobilanthus sessilis Nees, Family Acanthaceae is a small perennial shrub, found on grasslands of kas plateau of Western Ghats of India. Indian system of medicine used majority of crude drugs that are plant origin. It necessary that standard has to be laid down to control and check the identity of plant ascertains its quality before use. A detailed pharmacognostic evolution, therefore, is highly an essential prerequisite.

According to the World Health Organization (WHO), the macroscopic and microscopic description of the medical plant is the first step towards establishing its identity and purity and should be carried out before any test is undertaken. 16 Strobilanthus sessilis Nees used in traditional medicines has medical potential owing to its multifaceted biological function. The salient diagnostic characteristic of leaf was multicellular covering trichomes are ardently present on both epidermis, Diacyctic Stomata. The xylem elements are thick walled angular and compactly arranged radically. Phloem elements consist of small compactly arranged parenchymatous cells. These characters can be used for standardization of drug and also used for the preparation of plant monographs.

Ash values are used to determine the quality and purity of the crude drug. It indicates the presence of various impurities like carbonate, oxalate, and silicate. The water-soluble ash is used to estimate the amount of inorganic compound present in the drug. The insoluble acid ash consists mainly of silica and indicate contamination with earthy material 17. The extractive values are useful to evaluate the chemical constituents present in crude drug and also help in the estimation of specific constituents soluble in a particular solvent 18. The phytochemical analysis reveals the presence of Steroids, Flavanoids, and Cardiac Glycosides.

As there no pharmacognostic work on a record of this traditionally valued plant. The present work was taken up with a view to lay down standards, which could be useful to establish the authenticity of the medicinally useful plant. The results of the present study will also be helpful in the preparation of the monograph.