ABSTRACT: Background: Swertia chirayita (Roxb. ex Flem.) Karsten known as Kiratatikta in Ayurveda, the Indian indigenous health system, is used for various ailments like liver disorders, diabetes, fever, worm infestation, and others. Due to huge demand and non-availability, other Swertia species and other herbs are used as substitutes/adulterants for Swertia chirayita (Roxb. ex Flem.) Karsten. Hence, the present study is carried out with the objective of characterizing the macroscopic, microscopic features, the physicochemical and chromatographic profile of the herb. Material & Methods: Pharmacognostical parameters like microscopy, physico-chemical, phytochemical and chromato-graphic investigation for the whole plant of Swertia chirayita (Roxb. ex Flem.) Karsten was done using standard methodology. Results: The chief macroscopic features of the whole plant are wrinkled roots, quadrangular stem in the upper portion, leaves brittle, and presence of flowers and fruits. In powder microscopy, fragments of the epidermis with stomata, resin containing cells, pitted parenchyma, cells forming epidermis of fruit, parenchyma cells, pitted fibers, fragments of cotyledon, endosperm cells, sclereids were the key features. Phytochemical analysis revealed the presence of alkaloid, glycoside, tannin, and proteins. Chromatographic profile at 254 nm showed 6 spots with Rf values 0.01, 0.08, 0.33, 0.56, 0.65, 0.74 with maximum concentration of 40.68% at Rf value 0.33. Conclusion: This study will serve as a standard reference for the identification of Swertia chirayita (Roxb. ex Flem.) Karsten.

INTRODUCTION: Swertia chirayita (Roxb. ex Flem.) Karsten, an annual or biennial herb, belongs to the family of Gentianaceae.  It is known as Chirata in Hindi, Kiratatikta in Sanskrit, and in a trade known as Chiretta. The plant occurs sporadically in subtropical and temperate forests, in open forest margins, cool and moist places or in shady, moist slopes among tall grasses. It is reported as endangered due to loss of habitat and over-exploitation for medicinal uses 1.

This ethnomedicinal herb is known mostly for its bitter taste caused by the presence of different chemical constituents such as amarogentin, swerchirin, swertiamarin, and other bioactive compounds 2, 3.

Due to the huge demand for the herb, other species of Swertia and plants like Andrographis paniculata (green chirayita), Exacum tetragonum, E. bicolor, E. pedunculatum and Slevolgia orientalis are adulterated/substituted in the trade 4, 5.

Hence, the present study is carried out with the objective of characterizing the macroscopic, microscopic features, the physicochemical and chromatographic profile of the Swertia chirayita (Roxb. ex Flem.) Karsten.

Plant Material: The whole plant of Swertia chirayita (Roxb. ex Flem.) Karsten was purchased from Khajrekhar, a raw drug distributor, Belgaum, Karnataka, India. The authentication was done at S.D.M Research Center for Ayurveda, and Allied Sciences, Udupi, and a voucher specimen (No-17111703-08) maintained in the same laboratory. A portion of the whole plant was kept in an airtight container for macroscopic and sensory evaluation while another portion was pulverized into a coarse powder. It was stored in a well-closed container, free from environmental, climatic changes, or any other contamination till usage for further studies.

The preserved specimens were cut into a thin transverse section using a sharp blade, and the sections were stained with saffranine. Transverse sections were photographed using Zeiss AXIO trinocular microscope attached with Zeiss Axio Cam camera under bright field light. Magni-fications of the figures are indicated by the scale-bars.

Total Ash Value: 1g of the sample was taken in a pre-weighed crucible and ignited at around 450 °C for 4 h in a muffle furnace. The crucible was later cooled down in a desiccator to room temperature and weighed. The ash value was calculated with reference to the sample weight taken.

Acid Insoluble Ash Value: The ash obtained from the sample was taken into a beaker, and 25 ml dilute HCl (10% v/v) was added to it. The solution was boiled for 5 min and cooled down to room temperature. The solution obtained was filtered through Whatman no. 41 filter paper. The residue was washed with 50 ml boiling distilled water, and the filter paper, along with the residue, then transferred into the crucible and ignited for 4 h at around 450 °C. The crucible then cooled down into a desiccator and weighed. The acid-insoluble ash value was calculated with reference to the sample taken.

Water & Alcohol Soluble Extractive Value: 5 g coarsely powdered sample with 100 ml of water/ alcohol (95% v/v) was shaken frequently during the first 6 h and kept for 18 h. The sample was filtered using normal filter paper, from the filtrate 25 ml solution evaporated in a dry tarred drying dish and dried to constant weight at 105 °C in a hot air oven. The water/alcohol soluble extractive value was calculated with respect to the sample weight taken.

High-Performance Thin-Layer Chromato-graphy:  One gram of powdered Swertia chirayita (Roxb. ex Flem.) Karsten was suspended in 10 ml ethanol and kept for cold percolation for 24 h and filtered. 5 µl of the sample was applied on a pre-coated silica gel F254 on aluminum plates to a bandwidth of 7 mm using Linomat 5 TLC applicator. The plate was developed in Toluene: Ethyl acetate (7.0: 1.0). The developed plate was visualized in short UV, long UV and then derivatized with vanillin sulphuric acid reagent and scanned under UV 254 nm, 366 nm, and 620 nm following derivatization. Rf, the colour of the spots, and the densitometric scan were recorded.

Macroscopic and Organoleptic Evaluation: The sample included the whole plant with roots, stem, leaves, flowers, and fruits. Roots were simple, tapering, faintly longitudinally wrinkled, and externally brownish. Stem almost 1m long, cylindrical in the lower part, quadrangular in the upper portion, brownish in color externally. Leaves shriveled, brittle, with flowers, fruits, and brown in color. All parts of the plant were bitter to taste Fig. 1.

Microscopic Features: The transverse section of the stem was circular in outline, showed a layer of the epidermis and a narrow cortex, parenchymatous. Cortex was many-layered in the winged region of the stem. Below the cortex, was a narrow phloem tissue followed by xylem vessels. Pith was parenchymatous, very large, and formed cavity due to the disintegration of its peripheral cells Fig. 2. 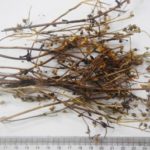 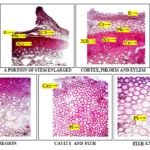 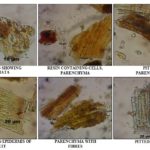 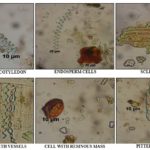 Physico Chemical Evaluation: The results of the physicochemical evaluation are tabulated and compared with the values of standards stated in Ayurvedic Pharmacopeia of India Table 1.

Preliminary Phytochemical Evaluation: The preliminary phytochemical investigation of the aqueous and alcoholic extracts of the whole plant of Swertia chirayita (Roxb. ex Flem.) Karsten revealed the presence of alkaloids, glycosides, tannins, and proteins in Table 2.

High-Performance Thin-Layer Chromato-graphy: Results of the chromatography of alcoholic extract of the whole plant of Swertia chirayita (Roxb. ex Flem.) Karsten showed presence of various compounds as represented in the densitometric scan at various wavelengths. Fig. 4. 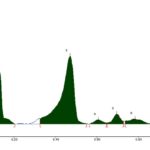 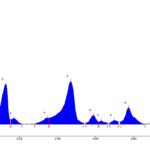 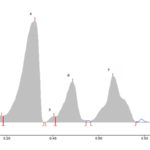 DISCUSSION AND CONCLUSION: Swertia chirayita (Roxb. ex Flem.) Karsten is one of the high prioritized plants by the National Medicinal Plants board 8. It is an official herb for Kiratatikta in Indian Ayurvedic pharmacopeia 6 and a reputed herb for its therapeutic potential in malaria, liver disorders, and diabetes 2. Due to its high demand and paucity in trade, other Swertia species are used as an adulterant or its substitute 9. Hence, a detailed systematic pharmacognostic evaluation of plant and plant material provides means of standardization of an herb. The morphological studies reported herein established the macroscopic and microscopic parameters of the plant, which corroborates with the previous study carried out to differentiate the species of Swertia 10.

These morphological characters may be utilized for quick identification of the drug. The microscopic characteristics are particularly useful in the case of the powdered drug. The physicochemical evaluation of an herb establishes its quality and purity. In the present study, Foreign matter, Total ash are within the stated standard limits, whereas Acid insoluble ash is more than the standard limit (1.53 ± 0.34) probably as the entire plant including roots was used for the study, which may relate to a mixture of the plant with sand and soil material. Similarly, water (9.67 ± 5.67) and alcohol extractive (9 ± 0) are below the standard limits, which relate to the purity of the herb. In the study, the preliminary phytochemical investigation revealed the presence of alkaloids, glycosides, tannins and proteins. Previous phytochemical studies have also reported the presence of these phytoconstituents and its role for its varied pharmacological activities 2, 11. HPTLC fingerprinting for various phytoconstituents in the extract serve as a specific tool to differentiate various extracts from the raw material of different species of herbs 12. The results obtained from HPTLC may serve as identification for Swertia chirayita (Roxb. ex Flem.) Karsten. Thus the microscopic, physicochemical, and chromato-graphic fingerprinting can be used to judge the adulteration and purity of the drug. The plant exhibits a set of diagnostic characteristics which will help for identification. HPTLC fingerprinting will help to supplement the information in regard to its identification and standardization.