OCCURRENCE OF CALCIUM OXALATE CRYSTALS IN THE LEAVES OF MEDICINAL PLANTS

OCCURRENCE OF CALCIUM OXALATE CRYSTALS IN THE LEAVES OF MEDICINAL PLANTS

ABSTRACT: Calcium oxalate crystals have a definite biological function in medicinal plants and act as a good diagnostic tool for the identification and detection of adulterants in crude drugs. The occurrence of calcium oxalate crystals was evident in Moringa pterygesperma, Mentha arvensis, Cissus quadrangularis, Murraya koenigii and Amaranthus gangiticus leaves. Rosette, druse, raphides, acicular and prismatic crystals were recorded. The presence of calcium oxalate crystals was confirmed; further Cissus quadrangularis leaves had both druse and raphides belonging to type-II. Druse in Amaranthus gangiticus was the largest, measuring about 12.98-18.82 µm in length, 9.74-14.28 µm in breadth in the light microscope and 22.1 µm Scanning Electron microscopy. Mentha arvensis leaves showed acicular crystals as well as druse in the Scanning Electron Microscope observation.

Herbivory and Ca existence 4. Hence, the distribution and the shape of these crystals are characteristic of each plant family 4. They seem to play an important role in the protection against herbivory 4, storage of calcium and oxalic acid, regulation of calcium levels in plant tissues 5, influence the photosynthetic process 6, give mechanical support 7 and also detoxification of heavy metals 1 in the plant tissue. Recent studies on calcium oxalate crystals in biological functions revealed that they are stored during the depositions for the secondary metabolites or metabolic ions.

Calcium oxalate crystals have diagnostic value, the presence and absence of crystals; their dimensions are of great importance in the identification of the crude drugs. It also helps in the detection of adulterants in herbal drug and in taxonomical identification. Since, the availability of literature on calcium oxalate crystals in medicinally important leaves is not abundant, present work was undertaken.

Powder Analysis: The leaves of the selected plants were taken, washed thoroughly and shade dried for few days. The dried leaves were grounded using a mortar and pestle. The powder thus produced was stored in an airtight container. A small quantity of powder was taken in a glass of slide and observed under a light microscope for the presence of calcium oxalate crystals. The shape of the crystal was observed. All the selected plant materials were observed for the presence of calcium crystals.

The Conformation of Calcium Oxalate Crystals: The shape and appearance of the crystals were noted. The dried powder of the selected plant was to treated with the concentrated sulphuric acid and observed for the formation of calcium sulphate needles. Those plants which showed the presence of calcium oxalate crystals alone was chosen for the further study.

Transverse Section of the Leaf: The leaves of the medicinal plants which were positive for the calcium oxalate test were taken, then washed properly and cut into small bits. A transverse section of the leaf was treated with sodium hypochlorite for bleaching, stained with safranin and observed for the presence of calcium oxalate crystals and photographed.

The Dimension of the Calcium Oxalate Crystals: The light microscope was calibrated at10X using an Ocular and Stage micrometry.

Value of 1 division = Stage Division ×10 / Ocular division. Divisions that coincided were taken and used for calibrating of the microscope. The section of the selected medicinal plants was observed in the microscope using an ocular. The length and breadth of the crystals are measured, and an average was taken.

Transverse Section of the Leaf: The transverse section of the leaf of the selected medicinal plant revealed the distribution of calcium oxalate crystals. Murraya koenigii leaf section showed hexagonal prismatic crystal in the parenchyma cells below and above the lower and upper epidermis, and it was evident near the vascular bundle as well. Moringa pterygesperma had a large number of small druse in idioblast cells. 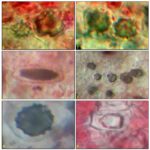 Scanning Electron Microscopy of Calcium Oxalate Crystals: The Scanning Electron Micrographs revealed that Amaranthus leaf had a large druse measuring 22.1 µm and Murraya exhibited rosette of 16.8 µm; while Cissus quadrangularis had a rosette of 25 µm, druse of 15.4 µm and raphides of 69.7 µm. Mentha arvensis had acicular crystals and hexagonal crystals measuring 30-50 µm. The acicular crystals had a pointed end and a forked opposite end. This is characteristic of Type-II raphides that are commonly seen in Vitaceae family Fig. 2. 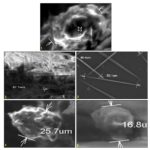 DISCUSSION: Distribution of calcium oxalate crystals is comparatively more common in the leaves than in stems. Earlier it is reported in species of Moraceae 8, Prunus sp. 9 Crataegus 10 and Aster squamates 11. They are generally distributed in the epidermis, mesophyll, and vascular tissue. In the present study it was evident that druse was present in specialized idioblast cells in mesophyll region in Moringa pterygesperma, Cissus quadrangularis, Amaranthus gangeticus and in Mentha arvensis, it was found above the lower epidermis.

A similar observation was made in mesophyll cells of A. squamates. They occurred both in epidermis and mesophyll cells of Conyza spp. of the Asteraceae tribe 12. Druse provides mechanical strength to the leaf tissue and moreover they also regulate the calcium levels in the tissue. This is an important function in the medicinal leaves since the medicinal property could be attributed to the presence of these crystals. Rosette crystals were reported Munronia pinnata and needle in Andrographis paniculata 13.

In the present study, Moringa pterygesperma had rosette crystals in the lower epidermis region. The raphides are crystal formed in vacuoles of the specialized cells or idioblast that are scattered in otherwise homogeneous cell types such as the mesophyll cells in the leaves. Generally, idioblast contains only one crystal type raphide or druse. The raphide crystal idioblast is concentrated at the lower portion of the leaf in tissue partitions between aerenchyma air spaces whereas the druse crystal idioblast is usually found at the upper portion of the leaf in compact chlorenchyma above the aerenchyma.  In Cissus quadrangularis both druse and raphides were observed; however, they appeared in separate idioblast cells distributed in mesophyll cells and above the lower epidermis respectively. Rosette, acicular, raphides and prismatic crystals of calcium oxalate are very common in Cissus quadrangularis Linn., Vitis trifolia Linn., Cissus repanda & Vitis vinifera Linn. 14 Panchvalkala is an ayurvedic preparation containing plant species belonging to Malvaceae and Moraceae. The powder analysis of these showed the presence of rosette & prismatic crystals 15. Presence or absence of different crystal types in the plant may, therefore, represent a useful taxonomic character in some groups.

CONCLUSION: The occurrence of calcium oxalate crystals among the selected twenty medicinal plants was only 25% belonging to Amaranthaceae, Lauraceae, Vitaceae, Rutaceae, and Moringaceae. It is concluded that the occurrence of calcium oxalate crystals in these medicinal plants serves as a diagnostic tool for taxonomic identification and purity of the plant sample.

ACKNOWLEDGEMENT: The authors wish to thank the principal and The Head of the Department for their laboratory facility and encouragement.