ABSTRACT: A study on nutritional and microbial analysis of Kunapajala with different storage interval was conducted in the Department of Soil Science & Agricultural Chemistry and Department of Plant Pathology, UBKV, Coochbehar - 736165, West Bengal during March 2019. The motive of this work was to estimate the physicochemical properties, macro, and micronutrient content, and various microbial load of Kunapajala with a different storage time interval. Kunapajala was rich in N, P, K, Ca, Mg, S, Fe, Zn, Cu & Mn and it had a significant beneficial microbial load of Fungi, Actinomycetes, Pseudomonas, solubilising phosphorus bacteria (PSB), Azotobacter, Azospirillum, Rhizobium and Trichoderma. Nutrient content and microbial population change significantly with time in Kunapajala. So, continuous foliar and soil application of Kunapajala from the beginning and up to 40 days after preparation was beneficial to get maximum utilization. It is recommended that Kunapajala can be used as an alternative against chemical fertilizers and pesticides to develop organic farming.

INTRODUCTION: India faced several famines in its history, and these famines claimed millions of life. In the famine of 1943, India lost around four million lives in eastern India alone 1. To solve that situation and to become self-sufficient in food production Government of India launched several scientific ventures. Ultimately in the late 1960s India became self-sufficient in food through green revolution. The success of the green revolution mainly relied on the heavy use of chemical fertilizers, pesticides, wide yielding varieties, and modern mechanical, agricultural instruments 2.

In contrast, modernization of agriculture and dependency on chemical fertilizers and pesticides gradually deteriorates the soil fertility and adversely affects the ecological balance, natural biodiversity, and environment 3. Adaptation of organic agriculture is the only way to solve this problem 4.

Kunapajala is liquid organic manure mentioned in Vrikshayurveda written by Surapala around 1000 AD and in Lokopakara written by Chavundaraya in 1025 AD. Almost 300 years later, Sarangadhara in his book “Sarangadhara-paddhati” on chapter “Upavanavinoda” also mentioned about Kunapajala 5, 6. Kunapajala is highly effective for crop plants and can be used as an alternative against chemical fertilizers. A significant development in production was observed due to spraying of Kunapajala in several crop plants including mango (Mangifera indica), soapnut (Sapindus emarginatus), coconut (Cocos nucifera), kiwi fruit (Actinidia deliciosa) and several vegetable crops. Spraying of Kunapajala on tea bushes controlled the attack of tea mosquito bug (Helopeltis theivora) and loopers (Biston suppressaria) and rat infestation also highly decreased. Narayanan (2006) reported that after spraying Kunapajala rats were disappeared from the tea garden. So it can also be used as an alternative against chemical pesticides and rodenticides 7, 8, 9, 10, 11. Hence, my motive of this research is to observe the Physical, nutritional and microbial properties of the Kunapajala with different time intervals for determining proper spraying schedule of Kunapajala in crop plants for maximizing its effects on crops.

Procedure: All these ingredients are mixed in an earthen pot, close the container, and allow them to ferment. Stirring twice in a day should be done in both the directions. After 40 days, the solution should be filtered and has to be collected 12. 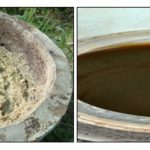 RESULTS AND DISCUSSION: The color of freshly prepared Kunapajala was brownish orange, and it became darker from the 20 days onwards. As the storage period progressed, the preparation became darker in color without much significant change. Through anaerobic respiration, several gases were produced, and that cause natural liquids and liquefying tissues. They also caused a build-up of pressure combined with the loss of integrity of the skin, and ultimately, the tissue was ruptured. Ruptures in the skin allowed oxygen to re-enter the tissue and provide more surface area for the development of fly larvae and the activity of aerobic microorganisms. For these activities, dark brownish orange color was developed 25, 26.

TABLE 3: MACRO AND MICRO NUTRIENT CONTENT OF KUNAPAJALA ON THE DAY OF PREPARATION, 20 AND 40 DAYS AFTER PREPARATION

Fresh preparation of Kunapajala possessed a foul alcoholic smell. The extreme foul odor was observed from 20 to 40 days onwards. The foul alcoholic odor was developed due to putrefaction. Anaerobic metabolism took place, leading to the accumulation of gases, such as hydrogen sulfide, carbon dioxide, methane, cadaverine, putrescine, and nitrogen. The purging of gases and fluids resulted in the strong distinctive odors 26, 27.

Initially, there was no mould growth in Kunapajala whereas it was first observed 5 days after preparation. Mould growth was observed on the liquid surface and also on the sides of the storage vessel from 15 days onwards, the decrease in mould growth was observed in 20 days and was completely absent in 25 days. Fungi consumed energy or food from the decaying tissue and enhanced the decomposition process. Fungi were abundant in the environment. From the air or from any other source they might be appeared in the Kunapajala vessel. But when tissues became totally liquefied or almost decomposed, their population started declining. It was due to the unavailability of food from that decaying tissue. This was the main reason of mould growth in Kunapajala 28, 29, 30.

During decomposition, at initial stages Kunapajala attracted flies and these flies laid eggs on it. From those eggs, maggots were developed. Young maggots spread throughout the container and took food from the decaying tissue. Due to the activity of maggots, the tissue started decomposing faster, and the bacterial activity also highly enhanced. When most of the solid tissue was liquefied, the activity of maggots drastically decreased. This was the reason behind the heavy development of maggots in Kunapajala after 5 days of its preparation and sudden decline of maggot population after 25 days of its preparation 31-33.

Total OC (organic carbon) was highest 40 days after preparation (4.18%), and on the day of preparation, it showed minimum value (1.72%) in Kunapajala. Anandan et al. (2016) noticed a similar trend of OC and resulted in his experiment 34.

The highest nitrogen content was recorded 20 days after preparation in Kunapajala (7238 ppm) while 40 days after preparation, it recorded the lowest value (3486 ppm). For the activity of bacteria and maggots, Kunapajala started decomposing faster and due to that N content of the Kunapajala was in an increasing trend. But after 20 days 9-44% of the N was volatized in the form of Ammonia from the solution due to the alkalinity of the Kunapajala solution on that moment 37.

On the day of preparation Kunapajala recorded the lowest value (208.661 ppm) of Phosphorus and 40 days after preparation it recorded the highest value (517.717 ppm) of Phosphorus. Kunapajala contained animal tissue, and animal tissues had high P content. According to Tian et al., (1992) 38, organic matters high in P decompose faster and release P significantly, and no volatilization was seen here. So, Kunapajala had an increasing tread of P content during decomposition.

Potassium content was lowest on the day of preparation (890.396 ppm), after that it gradually increased and reached the highest value 40 days after preparation (1873.543 ppm). The activity of fungus and other microorganisms was the reason behind the continuous release of potassium up to 40 days 39. Highest Ca content was observed 40 days after preparation (614 mg/l), and on the day of preparation, it was the lowest (376 mg/l). Excessive fungus and microbial activity was the reason for the continuous release of Ca up to 40 days 39.

On the day of preparation Mg content was the lowest (56 mg/l) and after 40 days, Mg content recorded the highest value (88 mg/l). Fungal and microbial activity was the main cause behind the gradual release of Mg in Kunapajala 39. S content was lowest on the day of preparation (678 mg/l), and after 20 days it recorded the highest value (857 mg/l), but then S content started declining. Due to the excessive volatile release of hydrogen sulfide, after 20 days S content started declining 39.

Highest Fe content was recorded 40 days after preparation (72 mg/l), and on the day of preparation, it was the lowest (55 mg/l). Due to fungal and bacterial activity, gradual release of Fe was noticed in Kunapajala 40.

On the day of preparation, Kunapajala recorded lowest Actinomycetes population (3 × 103 CFU/ml). After that, it increased continuously and reached the highest 40 days after preparation (5 × 108 CFU/ml). Continuous decomposition of a complex mixture of polymers in dead animal tissues was the prime reason for continuous development of Actinomycetes population in Kunapajala 44, 45, 46.

TABLE 4: BENEFICIAL MICROBIAL POPULATION OF KUNAPAJALA ON THE DAY OF PREPARATION, 20 AND 40 DAYS AFTER PREPARATION

CONCLUSION: The study concludes that Kunapajala has great potential as organic manure because of its high nutrient content and beneficial microbial population. It can also be used as an organic pesticide because most of the fungus and bacteria present in it have good bio-control properties. From the study, it is clear that the nutrient content and microbial population in Kunapajala is continuously varied with time.

So, foliar and soil application of Kunapajala from the beginning of its preparation and up to 40 days of its preparation will be helpful for the crop and soil because we can utilize its total potential. The ingredients required to prepare it is easily available and cheap comparing with chemical fertilizers and pesticides.

On the other hand, they are easily available also. So the use of Kunapajala instead of chemical fertilizer and pesticide is highly useful to increase the crop yield and to maintain the productivity of the soil. Moreover, it is highly cost-effective for farmers.

ACKNOWLEDGEMENT: My special thanks to Saddam da, Salim da, Amar da and my classmate Hiralal Mandi and Somesa Ghosh for their cooperation during laboratory work.