ABSTRACT: Plants are a great source of medicines, which are useful in the treatment of various diseases. Today sophisticated modern research tools for evaluation of the plant drugs are available, but the microscopical evaluation method is one of the simplest and cheapest methods to start with for establishing the correct identity of the source materials. Ximenia americana of family Oleaceae have great medicinal value in Indian medicine. It is used in of medicine as febrifuge, diarrhea, jaundice, laxatives, mouthwashes and hepatoprotective. Ximenia americana Linn. leaves showed epidermis of the midrib is single layered and the epidermal cells are small, cubical, thick-walled, with the prominent cuticl presence of paracytic stomata,  cyclocytic stomata Fig. 5 and absence of trichomes, under the polarized microscope, calcium oxalate appeared as druses and rosette type. In present study to evaluate microscopical characters of Ximenia americana leaf is carried out to lay down the standard which could be useful in future experimental studies.

INTRODUCTION: Herbal medicine has become a popular form of healthcare. The consumption of plant-based medicines and other botanical are increased manifold in recent years; many developing nations continued to benefit from the rich knowledge of medical herbalism. For example, Ayurvedic medicine in India, Kampo medicine and Unani medicine in the Middle East and South Asia are still used by a large majority of people 1, 2, 3, 4. World health organization estimated that 80% of people worldwide rely on herbal medicines for some part of their primary healthcare 5. In the use of advanced instrumental analysis techniques, we can evaluate the herbal medicines but the microscopic method is one of the simplest and cheapest methods to start with for establishing the correct identity of the source of materials.

The present work was undertaken to study the microscopical evaluation of leaves of Ximenia americana. Ximenia americana Linn. of family Oleaceae commonly known as chiru-illantai, kondanakkera, citron of the sea. It is a perennial herb found in the tropical and subtropical region in India. It is used as an anti-oxidant anti-microbial agent, anti-neoplastic agent, wound healing, toothache, febrifuge, jaundice and hepatoprotective.

MATERIALS AND METHODS: The leaves of the plant Ximenia americana Linn. were collected from Maredimilli, East Godavari district, Andhra Pradesh in December 2010. The plant materials were identified by the head of the botany department, Government College, Rajhmundry. The required samples of different organs were cut and removed from the plant and fixed in FFA [formalin- 5 ml + acetic acid- 5 ml + 70% ethyl alcohol- 90 ml]. After 24 h of fixing the specimens were dehydrated with graded series of tertiary butyl alcohol as per schedule is given by infiltration of the specimens was carried by the gradual addition of paraffin wax (melting point 58-60) until TBA solution attained supper saturation. The specimens were cast into paraffin blocks. The paraffin-embedded specimens were sectioned with the help of rotary microtome. The thickness of the section was 10-12 µm. dewaxing of the section was by a customary procedure the section were stained with toluidine blue 6. Since, toluidine blue is a polychromatic stain; the staining results were remarkably good 7.

Photomicrographs: Microscopic descriptions of tissues are supplemented with micrographs wherever necessary. Photography of different magnifications was taken with Nikon Lab photomicrographic units. For normal observations, bright field 8 was used. For the study of crystals, starch grains, and lignified cells, polarized light was employed. 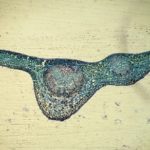 Midrib T.S.: The midrib of Ximenia americana Linn. Consists of a broad “v” shaped abaxial part and a flat adaxial side; the midrib is 700µm in the vertical plane and 650 µm. In transverse plane; the epidermis of the midrib is single-layered, and the epidermal cells are small, cubical, thick-walled, with prominent cuticle; the ground tissue of the midrib is differentiated into outer three or four layers of compact angular collenchyma cells and has dark colored cell contents; the inner region consists of thin-walled circular parenchyma cells. The vascular stand of the midrib occurs as bowl-shaped or semicircular abaxial arc; xylem elements occurs on the adaxial side and the phloem on the abaxial part of the midrib; the xylem elements are narrow, thick walled and arranged in parallel lines; phloem elements are the as thin band around the xylem on the abaxial part. The vascular structure is 250 µm thick and 500 µm wide. 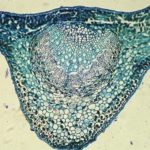 Lamina T.S.: The lamina is dorsiventral, mesomorphic, hypostomatic, with prominent coating of cuticle; the lamina is 160 µm thick; both the abaxial and adaxial epidermis is single layered and the epidermal cells are rectangular to squares, thick-walled with distinct cuticle coating; the palisade mesophyll cells of the lamina are single layered 40 µm in height, cylindrical, compact and occupy one third thickness of the lamina; the spongy mesophyll is three  or four-layered, and the cells are spherical and less compact; the lateral vein bundles are prominent and occur at the median part of the lamina; the vein bundles have few xylems and few phloem element 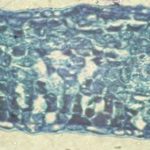 Petiole T.S.: The petiole is more or less circular in cross section with a short adaxial projection; the epidermis of the petiole is single layered, the epidermal cells are small, cubical and thick-walled; the epidermis is followed by six layers of thick-walled angular collenchymas cells which are dark colored cell content; the inner region comprises thin-walled tangentially oblong, circular or compact parenchymatous ground tissue.

The vascular strand of the petiole occurs as a dense continuous closed cylinder of xylem elements surrounded by phloem; the xylem elements are narrow, thick walled and are arranged in radial files; phloem elements occurs as a narrow band all around the xylem cylinder. When the petiole is viewed under a polarized light microscope the calcium oxalate crystals appear bright against the dark background and show their distribution pattern; the calcium oxalate crystals are druses type and they are predominant in the ground tissue of the petiole. They are diffuse in distribution range in size from 10-30 µm. The cells bearing the druses are ordinary parenchyma cells, not modified in size and shape.

Stomatal Morphology: The abaxial epidermis is stomatiferous, and the epidermal cells are rectangular or polyhedral, thick and straight walled, the stomata are paracytic, i.e. in this type, the stoma is accompanied on either side by one or more subsidiary cells which lie parallel to the long axis of the pore and the guard cells. Some of the stomata are cyclocytic; each stoma is surrounded by a ring of subsidiary cells. 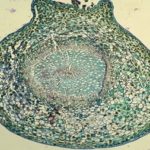 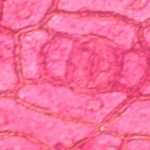 Venation Pattern: The lamina is cleared and made transparent to show their reticulation in Ximenia americana L. the vein islets are wide, rectangular and thick; the vein terminations show branching, the branching is dichotomous, and the branches spread in the entire islet. Forming dextrinoid outline. 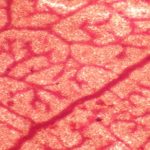 RESULTS AND DISCUSSION: Microscopical investigation of Ximenia americana Linn. leaves showed the presence of paracytic stomata, cyclocytic stomata, and absence of trichomes. A vascular strand of the midrib occurred as a broad bowl or semicircular. Midrib was 700 µm in the vertical plane and 650 µm transverse planes. The lamina was a dorsiventral, mesomorphic, hypo-stomatic, coating of the lamina with the epidermis, 160 µm thick. Epidermal cells were rectangular. Petiole was circular with short adaxial projection when the petiole viewed under a polarized microscope, calcium oxalate appeared as druses and rosette type. Crystals were predominant in the ground tissue of petiole. These are diagnostic characters for Ximenia americana Linn. The information obtained from microscopical studies 9 will be useful in the identification of the crude drug, and it will be useful in further studies.