ABSTRACT: Rhizoma Curcumae longae is the dried rhizome of Curcuma longa L. (Zingiberaceae), commonly known as turmeric, has a long history of traditional uses for culinary purposes as a spice and as a food colorant. This study was aimed at establishing the microscopic identification of different commercial samples and developing parameters for discriminating turmeric powders. In this study, fifteen samples from different origins were analyzed, and each experiment was performed in triplicate. Statistical techniques were used to analyze the partition of the structure observations. The principal component analysis was applied to the distribution of the forty-five sample observations. In consequence, eleven discriminating structure features were identified. The most diagnostic features are yellow clumps of gelatinized starch, covering trichome, starch granules, vessels, cork, and fibers. The results showed that microscopic observation of rhizoma Curcumae longae powder could be grouped according to the presence of non-glandular trichome, and calcium oxalate crystals clusters. These findings revealed that microscopic analysis, coupled with statistical analysis, could provide a simple platform for medicinal plant identification, particularly for the diagnostic authentication of commercial samples.

INTRODUCTION: Curcuma longa (C. domestica Valeton.) is native to Southeast Asia, 1-3 consumed as a dietary spice and used in the treatment of skin, respiratory, liver and gastrointestinal tract diseases 4. In India, adulteration of turmeric is a serious problem in local markets 5. Many reference books still record the microscopic characteristics of turmeric of turmeric (C. longa), e.g., the Ayurvedic Pharmacopoeia of India 6, the Indian Pharmacopoeia 3, the Chinese Materia Medica 7, the European Pharmacopoeia 8, and the American Herbal Pharmacopoeia 9.

To our knowledge, there is no data available on the microscopic analysis using a multivariate test. Therefore, the present investigation was undertaken to identify the microscopic features of different commercial samples and identify parameters for discriminating and authenticating C. longa powder.

Sampling: Fifteen samples of powdered rhizomes of C. longa were provided from souks in three locations Annaba [sample 1-6], Souk Ahras [sample 7-11] and El Taref [sample 12-15] district, situated in North Eastern Algeria during April 2014. The voucher specimens of the rhizomes were deposited in the Department of Pharmacognosy, University of Cairo, Egypt by correlating their morphological and microscopic characters with those described in the literature. The organoleptic characters of the dried rhizome powder, like color, odor and taste, and the microscopic characters were evaluated as per standard WHO guidelines 10.

Mounting: The powdered material was placed on the slides. Lactic acid (1-3 drops) was added and the materials stirred with a fine pointed needle to distribute the testing agent evenly. The mixture was covered with a glass slip, and any excess liquid exuding from under the cover slip was removed by blotting around its edges gently with filter paper. Lactic acid provided a yellow color for all the lignified elements, and red-orange color for the secretion products, such as the resins and essential oil11. Each observation of the individual sample was replicated three times.

Statistical Analysis: Statistical tests presented in this study were analyzed using SPSS Statistics 17.0 (Statistical Package for Social Sciences, SPSS Inc., Chicago, IL, USA, 2008). Multivariate tests were used to determine the complex relationship among variables. Seven microscopic features were analyzed by correspondence analysis. Analyses examined the relationships between the 45 observations and the associations between variables in two dimensions. Additionally, similar micro-scopic observations were identified from their positions, concerning the axes, and the underlying features in the noticed pattern. Finally, the observed patterns were explained based on key features in the microscopic observation.

Organoleptic Characteristics: C. longa is a bright, golden-yellow powder with an aromatic and pleasant odor and a pungent and aromatic taste.

Microscopic Characteristics: Firstly, four characters were observed in all samples (15), with 100% of total observations:

Statistical Description: The homogeneity or the variability was investigated by the multivariate test. The forty-five observations were recorded to the seven microscopic features; using Multiple Correspondence Analysis (MCA). The two axes explained 48.9% of the observed variation. The X axis and the Y axis accounted for 55.7% and 40.3% of the variations, respectively. The coefficients represent the correlation with the two axes. The oleoresins and covering trichomes were positively linked on the first factor (0.650, 0.591), but weakly related to the second factor (0.020, 0.004). In contrast, it was observed that the calcium oxalate cluster showed a strong link on the second factor and was loaded weakly on the X-axis (0.647 vs. 0.011) Table 1. 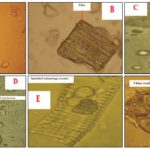 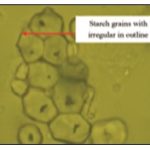 The projection of the matrix is plotted in Fig. 3 in two dimensions and the position of observation depicted underlying the analyzed parameters. Two groups have been distinguished by the presence of covering trichome. Group, I is characterized by the lack of covering trichome and included similar observations [11, 16, 12, 10, 18, 17]. The presence of a covering trichome characterizes group II. However, two subgroups were distinguished in Group II, related to the cluster crystals of calcium oxalate. In this way, the clusters were identified in all observations of the subgroup I [4, 5, 6], while they were absent in the subgroup II. 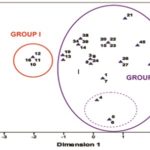 FIG. 3: PROJECTION OF MATRIX OF THE POSITION OF OBSERVATION UNDERLYING THE ANALYZED PARAMETERS

DISCUSSION: Microscopic identification is the oldest, simplest and cheapest method for plant characterization; this is to be preferred when its use is feasible. In a previous study, the anatomical description of C. longa rhizome was reported, as well as microscopic characteristics of the powder. It includes cork, starch, fibers, and vessels 13. In different Pharmacopoeias, included the Indian 3 Chinese 3 European 8 and American 9 the microscopic identification of turmeric powder was documented.

However, the adulteration of this spice is exceedingly prevalent in India, and probably the most subject to admixture is turmeric. The use of a microscope is important for the detection of adulterating and contaminating materials. Nevertheless, to identify adulteration by another species of the same genus Curcuma (C. xanthorrhiza, C. aromatica, and C. zedoaria) is often difficult, particularly in the starch grains, and the oleoresin cells which are destroyed by boiling 5. Although the adulteration of C. longa by C. aromatica and C. zedoaria can be detected chemically from the presence of camphor and camphene, which occur as minor components in the essential oil of the latter two species 14.

Therefore, the combination of microscopic data and statistical methods was built in this study to distinguish discriminating features in the authentication of C. longa. In the first step, eleven microscopic features were described. In the second step, the forty-five observations were submitted to the statistical analysis recorded to seven microscopic features included trichomes, starch grains, vessels, cork, oleoresins, prism and cluster of calcium oxalate.

CONCLUSION: Fifteen commercial samples of turmeric were observed. Eleven key microscopic features were identified. All the samples contained yellow clumps of gelatinized starch granules, fibers, and oil droplets. However, the percentage of observation of other features varied. The oleoresin was identified in 28.9% and cork in 64.4% of the total observations. Therefore, the forty-five observations were submitted to multivariate analysis that suggested the existence of two groups of samples distinguished by the presence or the lack of the non-glandular trichome. Also, calcium oxalate crystal clusters were the feature key to identify subgroups. It was reported that C. longa rhizome was characterized by the lack of calcium oxalate crystals, and this point appeared useful to analyze this group of samples. This finding revealed that microscopic analysis, coupled with statistical analysis, could provide a platform for plant identification, particularly in the authentication of commercial samples.

ACKNOWLEDGEMENT: The Author would like to thank Professor Emeritus Geoffrey A. Cordell, Natural Product Inc., Evanston, IL, USA, for his review of the manuscript.