ABSTRACT: Kameela or Kamala is a well known Unani drug which is being used as medicament from centuries for the treatment of Amraze Jildiya (skin disease) by Unani Physicians and also mentioned their medicinal efficacy in Unani Classical text. It is widely scattered perennial shrub or small tree in tropical and subtropical region regions with an altitude below the 1,000 m and is a description to have a broad range of pharmacological activities. There are many chemical constituents documented such as phenols, steroids diterpenoids, triterpenoids, flavonoids, coumarins, isocoumarins, cardenolides and mainly phenols; that is, bergenin, malloto philippinens, rottlerin, and iso rottlerin have been isolated, identified, and reported different biological activities such as antimicrobial, cytotoxicity, antifungal, antiviral, antioxidant, anti-inflammatory. Roghan Kameela and Zimad Jarb is well established compound drug of Unani system for the treatment of Jarb (Scabies) and Kharish (itching) which is time tested and safe. The present review reveals that Mallotus philippinensis is a precious source of natural medicament and provides persuasive support for its potential use in a modern medicament.

INTRODUCTION: Mallotus philipiensis L. commonly known as Kameela/Kamala which is a large woody multipurpose medicinal tree belongs to the family of Euphorbiaceous consisting of herbs, shrubs, and trees. It is up to 10-12 meters in height and is widely distributed throughout tropical India along with the Himalaya from Kashmir eastwards up to 5000 feet. The plants are a rich source of biologically active compounds and are used as a common dye yielding plant various parts of the Kameela are used for the healing of skin problem, antifungal tapeworm, eye-disease, bronchitis, diarrhea, urinogenital infection, cancer, diabetes, jaundice, malaria, etc. 1, 2

Fruits of Mallotus philippinensis have been reported being used since a long time in Ayurvedic (Indian), Arabic, Unani and Chinese traditional Medicine systems as anti-helminthics, antifungal, antibacterial and immunoregulatory properties, anti-filarial, anti-parasitic, anti-ulcers and as aphrodisiac activities 3.

Chemical Constituents: Kamala oil has been found to contain about 60% of kamlolenic acid as the only major component with minor proportions of common linoleic, oleic, and saturated acids and probably some conjugated diethenoid acid. 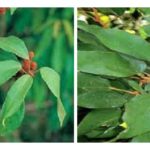 Compound Unani Formulations: There are some compound formulations which active constitutes is Kameela such as; Roghan Kameela, Zimad Jarb 17-20.

Hepatoprotective Activity: Ramakrishna S et al., reported that ethanolic extract of Kameela leaves exhibit hepatoprotective activity against CCl4 induced hepatotoxicity in rats when compared to Silymarin which was standard control, which may be attributed to its antioxidant property 23.

CONCLUSION: There is a large number of western medicine available for the treatment of skin diseases but it has some drawback as high cost-effective and their side effects, and the chance of recurrence is high when the drug is stopped because most of the cosmetic drugs are steroid based. The medicament which derived from natural sources has lesser side effects and easily available our natives.

Kameela contain various active chemical constituents viz; flavonoids, phenolic, glycosides compound, and tannins which have been reported as antimicrobial activity against various skin disorders. Further elaborative research is needed hidden benefits of Kameela and other active constituents. This review will be helpful as new vistas for the research scholars for various skin diseases.