ABSTRACT: The present research aimed at scrutinizing the role of Mahua Oil (MO) as a suppository base which can enhance the release of drug in the site of administration. Three formulations were designed with erythromycin as the drug utilizing; F1 (MO and Beeswax in the ratio of 3:1), F2 (MO and PEG 6000 in the ratio of 1:1), and F3 (cocoa butter - 100%) as the base material. The suppositories were prepared using pour molding method after suitable calibration of molds. All the formulations were characterized in terms of breaking strength, disintegration time, drug content, in-vitro dissolution, and accelerated stability studies. The MO containing formulations displayed a good breaking strength, optimized disintegration time, and higher drug content as compared to the cocoa butter formulation. The optimized formulation F2 represented the optimized release of 81.35% over the range of 1 h. A little difference in drug content (1.78%), breaking strength (0.2 Kg/cm2), and disintegrating time (0.6 min) was observed in the accelerated stability study. The study concluded that MO has a noteworthy effect on drug release. The study emphasized the application of MO for release modification in suppositories since it is a non-toxic, chemically inert, economic, wide availability, and biodegradable component.

INTRODUCTION: In modern pharmaceutics, the emergence of natural products as excipients was widely perceived among the researchers, because synthetically derived products do have several complications 1. Once upon a time, the excipients were believed bulk inactive stuff which only complements the API. But now, with the advancement in knowledge and proofs, they are now being considered as an imperative factor in pharmacodynamics 2.

They are acceptable among the population owing to their social acceptance in traditional usage, ethnobotanical aspects, and diverse, safe pharmacological applications. Of them, Mahua Oil (MO), an oily component, which is extracted from the seeds of Madhuca longifolia (family: Sapotaceae), also known as the Mahua or butternut tree, present through the Indian subcontinent to South Asian nations 5. MO is a well-known nutraceutical product containing several natural ingredients with high nutritional value along with long shelf life. MO is a non-toxic, cheap, non-reactive, and easy extraction procedure that finds traditional use by the low socio-economic status population for decades as cooking oil in rural areas.

The medicinal applications like headache, emetic, hemorrhoids, laxative, skin disease, constipation, emollient, rheumatism, piles, etc. are also reasons for its popularity among a section of the society 6. From the survey of traditional databases, it has been evidenced that the utilization of MO in modern pharmaceutics is not yet done. Mahajan and co-workers have recently reported the use of MO as an emulsifier in cream formulations and permeation enhancer in gel formulations 7-8.

The present research aimed at scrutinizing the role of Mahua Oil (MO) as a suppository base which can enhance the release of drug in the site of administration. Three formulations were designed with erythromycin as the drug utilizing; F1 (MO and Beeswax in the ratio of 3:1), F2 (MO and PEG 6000 in the ratio of 1:1), and F3 (cocoa butter - 100%) as the base material.

All the formulations were characterized in terms of breaking strength, disintegration time, drug content, in-vitro dissolution, and accelerated stability studies.

Determination of Acid Value: 10 gm of MO was dissolved in a 50 mL mixture of ethanol (95%) and ether, previously neutralized with 0.1 M KOH. In the presence of 1 mL of phenolphthalein solution, the content was titrated with 0.1 M KOH until the solution becomes faintly pink permanently. The acid value was calculated as per the formula: Acid Value = 5.61 n/w; where, n = volume of KOH required, and w = weight of the sample (in g) 9.

Determination of Saponification Value: 2 g of weighed MO was taken in a flask fitted with a reflux condenser. 25 mL of 0.5 M ethanolic KOH solution and little pumice powder were added, and the content was refluxed for 30 min. 1 mL of phenolphthalein solution was added, and titration was performed immediately with 0.5 M HCl. Alongside, a blank titration was carried out omitting the MO. The saponification value was calculated as per the formula: Saponification Value = 28.05 (b- a) / w; where, w = weight (in g) of MO, b = volume of HCl utilized in blank titration, and a = volume of HCl consumed 9.

Determination of Iodine Value: An accurately weighed quantity of MO was placed in a dry iodine flask. To it, 10 mL of CCl4 and 20 mL of iodine monochloride solution were added. The content was allowed to stand in the dark at a temperature between 15 °C - 25 °C for 30 min. 15 mL KI solution was placed in the cup top, and the stopper was carefully removed. From the side of the flask, 100 mL water was added and titrated with 0.1 M sodium thiosulphate using starch solution indicator. The amount required was noted. A blank titration was also performed sidewise. The iodine value was calculated as per the formula: Iodine Value = 1.269 (b - a) / w; where, w = weight (in g) of the substance, b = volume of titrant utilized in blank titration, and a = volume of titrant consumed 9.

Preparation of Formulations: The suppositories were prepared by pour molding method. The formulation 1 and formulation 2 were prepared where MO was added to the beeswax / PEG 6000 in the desired ratio and the content was heated to 70 – 80 °C in the presence of water containing accurately weighed erythromycin drug in dispersed form, to produce homogenous content. The molds were previously calibrated (1 g capacity) using the molten bases (not drug), followed by weighing the product. The process was performed for each base. The mold capacities were found to be in the range of 0.991 - 1.021 g. The formulation 3 was produced using cocoa butter and drug in a similar manner. Table 1 portrays the formulation of batch information.

Determination of Drug Content: A suppository formulation was accurately weighed and dissolved in phosphate buffer (pH 7.2). The content was further sonicated for a period of 10 - 15 min and volume was made up to 100 mL. 10 mL of the content was pipetted out and diluted further to 100 mL with phosphate buffer (pH 7.2), and the final dilution was made to get a concentration within Beer-Lambert’s range. The absorbance was measured spectrophotometrically at 225 nm against blank suppository treated in the same manner as the sample.

Determination of Breaking Strength: Breaking strength was carried out to determine the tensile strength of suppositories to reveals the ability to withstand the hazards of packing and transportation. The hardness of the formulated suppositories was tested using Pfizer hardness tester 10.

Determination of in-vitro Drug Release: The in-vitro drug diffusion study of suppository formulation was carried out using a USP dissolution test apparatus-II (basket type). The dissolution medium was 900 mL of phosphate buffer pH 7.4. The drug release study was performed at 37 ± 0.5 °C, with a rotation speed of 50 rpm. 5 mL of the samples were withdrawn at predetermined time intervals by a syringe fitted with prefilter and replaced with fresh dissolution medium to maintain the sink conditions. The samples were analyzed by UV spectrophotometer at 225 nm after appropriate dilution. The cumulative drug release was calculated and plotted against time 12. The study was performed in triplicate manner.

RESULT AND DISCUSSION: The physico-chemical parameters of the MO like iodine value, saponification value, and acid value were studied comprehensively to determine the authenticity and purity of the base. The parameters were found to be held by the pharmacopoeial range, and the purity was ascertained accordingly Table 2.

The formulation F1 containing the highest concentration (3:1) had a breaking strength of 5.4 Kg/cm2 which signifies that a good polymer structure was formed by MO which imparted the desired strength. The drug content was also found to be highest for F1 formulation which may be explained that MO has good polymeric characteristics that influenced better drug loading as compared to F3 (cocoa butter) formulation.

The lowest drug release from cocoa butter formulation was attributed due to the high molecular weight and the intrinsic structure which increases the polymer density and provides significant diffusional resistance 14. It has been perceived that as the concentration of MO gets increased, the drug release increased significantly. Therefore, a ratio of 1:1 provided the best control drug release for 1 h duration. Additionally, the MO has a property of permeation enhancement which will further assist clinical absorption of the drug from the administration route.

The accelerated stability conditions for 90 days revealed that the formulation F2 did not show any such changes at 40 °C ± 2 °C and 75% ± 5% RH. A little difference in drug content (1.78%), breaking strength (0.2 Kg/cm2), and disintegrating time (0.6 min) was observed. The reduction in physical parameters may be attributed due to the polymorphism or temperature-induced loss of polymeric structural changes, which leads to reduction in the strength of the formulation, which eventually results in faster disintegration and loss of drug content 15. The accelerated stability results are mentioned in Table 5. 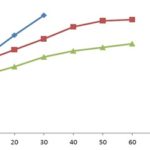 CONCLUSION: This research outcome indicated that the combination of MO, a key ingredient obtain from Madhuca longifolia and PEG 6000 (F2) demonstrated the highest drug release of 81.35% at the end of 1 h which was far better than the cocoa butter based formulation (F3) which exhibited a release of 74.04%. The ratio of 1:1 of MO was also found to be better than the ratio of 3:1 which demonstrated the highest release of 84.41% in 30 min.

The study also concluded that MO has a noteworthy effect on drug release. Based on the concentration, MO expressed the drug release from the formulation. Therefore, the study emphasized the application of MO for release modification in suppositories, since it is a non-toxic, chemically inert, economic, wide availability, and biodegradable component.