ABSTRACT: Lymphatic filariasis (LF) is a major public health problem not only in India but also in other developed countries. Filariasis is the disease which is caused by a group of filarial worms. It is transmitted by mosquitoes - Culex quinquefasciatus globally the most important vector. They cause high morbidity and mortality among humans. The proper management is needed for preventing the morbidity and mortality by laboratory diagnostic methods. Ir-reversible ‘elephantiasis’ is the major clinical manifestation for LF. Diethylcarbamazine (DEC) is the drug of choice for treating lymphatic filariasis. Sequential gradient pump therapy and complete decongestive therapy (CDT) are some additional treatment for better therapeutic value.

INTRODUCTION: Filariasis is found to be a problem worldwide Fig. 2. More than 1.1 billion people live in areas where there is a risk of infection 1. From a survey, it is estimated that about 600 million people are living in areas endemic for lymphatic filariasis in SEAR. 60 million are infected, and about 31 million people have a clinical manifestation of disease 2. Filariasis has been a major public health problem in India next to malaria. The disease was recorded in India as early as 6th century B.C. by the famous Indian physician, Susruta in his book ‘Susruta Samhita’ 3.

National Filaria Control Programme (NFCP) was launched in the country in 1955 with the objective of delimiting the problem and to undertake control measures in endemic areas. The manifold increase in filariasis during last four decades reflects the failure of filariasis control programs 4. Currently, there may be up to 31 million microfilaraemia, 23 million cases of symptomatic filariasis, and about 473 million individuals potentially at risk of infection in the country. Lymphatic filariasis (LF) is a major impediment to socioeconomic development (estimated loss $1 billion per year) and is responsible for immense psychosocial suffering among the affected 5.

The state of Bihar has the highest endemicity (over 17%) followed by Kerala (15.7%) and Uttar Pradesh (14.6%). Andhra Pradesh and Tamil Nadu have about 10% endemicity. Goa showed the lowest endemicity (less than 1%) followed by Lakshadweep (1.8%), Madhya Pradesh (above 3%) and Assam (about 5%). B. malayi is prevalent in the states of Kerala, Tamil Nadu, Andhra Pradesh, Orissa, Madhya Pradesh, Assam, and West Bengal. The single largest tract of this infection lies along the west coast of Kerala, comprising the districts of Trichur, Ernakulam, Alleppey, Quilon, and Trivandrum, stretching over an area of 1800 sq km6, 7.

Parasite and its Vector: The most widespread LF infection is due to Wuchereria bancrofti (98%) and the remaining infection by Brugia malayi (2%). In India W. bancrofti transmitted by the ubiquitous vector, Culex quinquefasciatus Fig. 3A a ubiquitous mosquito, breeds in almost all organically polluted water bodies has been the most predominant infection contributing to 99.4% of the problem in the country. The infection is prevalent in both urban and rural areas. B. malayi a single largest focus in the central coastal part of Kerala, and small isolated foci in six other States, transmitted by Mansonia mosquitoes (M. annulifera, M. uniformis and M. indiana) breed in association with floating hydrophytes in freshwater bodies.

Transmission Cycle of Parasite: The adult worms of both W. bancrofti Fig. 3B and B. malayi live in the lymph canals and lymph nodes of man. The longevity of adult parasite varies from 5-18 years, 8, 9 but a maximum lifespan up to 40 years has been reported 10. The microfilariae (mF) are produced from ova in the uterus of the female worm and sheathed mF begins to appear in the peripheral blood six months to one year after infection 11. The mF remains in the arterioles of the lungs during the day and emerge at night.  They (when picked up by the mosquito during blood meal) undergo development in the mosquitoes (intermediate hosts) to form the infective larvae. 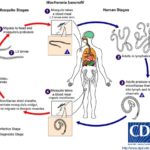 FIG. 1: LIFE CYCLE OF LYMPHATIC FILARIASIS IN HUMAN AND MOSQUITO

The duration of development of mF to infective stage varies between species; W. bancrofti takes 10-14 days, whereas B. malayi 7-10 days. When the infective mosquitoes bite, the L3 larvae escape from the proboscis and actively enter the human host through the wound made by the mosquito for blood-meal Fig. 1. The shortest pre-patent period (from the entrance of L3 to the appearance of mF in the peripheral blood) is estimated at nine months for W. bancrofti and three months for B. malayi. The appearance of mF depends upon the mating probability of adult worms, pre-patent period and the intensity of transmission.

Clinical Manifestations of Lymphatic Filariasis: There are bouts of fever accompanied by pain, tenderness, and erythema along the course of inflamed lymphatic vessels. The fever abates after a few days, and the symptoms and signs subside. Further attacks follow temporary edema becomes more persistent, and regional lymph nodes enlarge. Progressive enlargement, coarsening, corrugation, and fissuring of the skin and subcutaneous tissue with warty superficial excrescences develop gradually, causing irreversible ‘elephantiasis’ Fig. 3C. Eventually, the adult worms may die, but the lymphatics remain obstructed. The other clinical form of the disease is hydrocele, with lymphoedema occurs less commonly. The interval between infection and the onset of elephantiasis is usually not less than 10 years, and elephantiasis develops only in association with repeated infections in highly endemic areas 12. 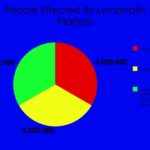 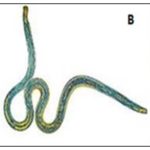 Recent Advance Diagnosis: The following recent techniques are used for the diagnosis of filariasis:

A Membrane Filtration Method for Microfilaria Detection: 5 ml of venous blood collected in EDTA anticoagulant tube at night (between 11 pm and 1 am) to test the presence of circulating microfilaria and the collected blood filtered through millepore membrane filters (pore size 0.22). It enables an easy detection of microfilaria and quantifies the load of infection. They are usually observed in the early stages of the disease before clinical manifestations develop. Once the lymphoedema develops, microfilaria disappears from peripheral-blood 13.

Lymphoscintigraphy: The structure and function of the lymphatics of the involved limbs can be assessed by lymphoscintigraphy after injecting radiolabelled albumin or dextran in the web space of the toes; the structural changes are imaged using a gamma camera. Lymphatic dilatation, dermal backflow and obstruction can be directly demonstrated in the oedematous limbs by this method. Lymphoscintigraphy has shown that even in the early, clinically asymptomatic stage of the disease, lymphatic abnormalities in the affected limbs of people harboring microfilaria may occur 13, 14.

Ultrasonography: By using a 7.5 MHz or 10 MHz probes can locate and visualize the movements of living adult worms of WB in the scrotal lymphatics of asymptomatic males with micro-filaraemia. The constant thrashing movements described as “Filaria dance sign” can be visualized.

ELISA Test: Enzyme - Linked Immunosorbent Assays (ELISA) in this test soluble extracts of microfilaria and infective larva or adult worms can be used for diagnosis. Positive readings were obtained in 93-100% of subjects living in endemic areas, those with microfilaraemia as well as those with clinical evidence of filariasis. Antigen testing is now recognized as the method of choice for detection of W. bancrofti infections.

Unlike tests that detect microfilariae, antigen tests can be performed with blood collected during the day or night. However, existing enzyme-linked immunosorbent assay (ELISA) tests for filarial antigenemia are difficult to perform in the field, and this has limited their use in endemic countries. Highly sensitive and specific filarial antigen detection assays ELISA based format is now available for the diagnosis of W. bancrofti infection. This test is positive in the early stages of the disease when the adult worms are alive, and it becomes negative when the parasites are dead 15.

Demonstration of Microfilariae in the Peri-pheral Blood: 2-3 drops of blood are to be taken by finger prick method on a glass slide, and a thick oval-shaped smear is to be made with the help of corner of another slide, and it is to be dried, then stained with Giemsa stain and is to be seen under the oil immersion lens by putting one drop of oil (100X), the morphology of the parasites are to be recorded.

DEC Provocative Test (2 mg/kg): After consuming diethylcarbamazine (DEC), micro-filariae enter into the peripheral blood in day time within 30-45 min and then it can be detected in peripheral blood.

Quantitative Blood Count (QBC): QBC will identify the microfilariae and will help in studying morphology. Though quick, it is not sensitive than blood smear examination.

Reducing Your Risk of Lymphatic Filariasis:

Medication: Diethylcarbamazine (DEC) is the drug of choice for treating lymphatic filariasis. This drug effectively kills the microfilariae. The recommended treatment for people outside the United States is albendazole (a broad-spectrum anthelmintic) combined with ivermectin 16. A combination of diethylcarbamazine and albendazole is also effective. All of these treatments are microfilaricides; they do not affect the adult worms. Different trials were made to use the known drug at its maximum capacity in the absence of new drugs. In a study from India, it has been shown that a formulation of albendazole has better anti-filarial efficacy than albendazole itself 17.

In 2003, the common antibiotic doxycycline was suggested for treating elephantiasis 16. Filarial parasites have symbiotic bacteria in the genus Wolbachia, which live inside the worm and seem to play a major role in both its reproduction and the development of the disease. Clinical trials in June 2005 by the Liverpool School of Tropical Medicine reported an eight-week course almost eliminated microfilaraemia 18, 19.

Complete Decongestive Therapy (CDT) or Manual Lymph Drainage: Manual manipulation of the lymphatic ducts consists of gentle, rhythmic massaging of the skin to stimulate the flow of lymph and its return to the blood circulation system. In the blood’s passage through the kidneys, the excess fluid is filtered out and eliminated from the body through urination. CDT is generally effective on non‐fibrotic lymphedema and less effective on more fibrotic legs, although it has been shown to help break up fibrotic tissue 20.

Filariasis Control in India: A project was initiated in Orissa from 1949 to 1954. The National Filaria Control Programme (NFCP) was launched in the country in 1955, with the objective of delimiting the problem, to undertake control measures in endemic areas and to train personnel to man the programme. The main control measures were mass DEC administration, antilarval measures in urban areas and indoor residual spray in rural areas.