ABSTRACT: Antigonon leptopus Hook & Arn (family Polygonaceae), also called: Chain of love, Queen’sWreath, and Mexican creeper is a fast-growing vine with stems reaching up to 20 feet long. It has heart-shaped, green leaves climbing by tendrils which wrap around many types of supports. It is native to Mexico and commonly found in tropical Asia, Africa, the Caribbean, and the Americas. It possesses anticoagulant activity, analgesic, anti-thrombin, anti-inflammatory, anti-diabetic and antidepressant activities. Aerial parts of the vine have been used as hepatoprotective and for spleen disorders. During the present study, LC/MS experiment was conducted on the methanolic extract of the aerial parts of the vine. Results revealed the identification of total fifty compounds; flavonoids, phenolics, anthocyanins, and glycosides. Compounds were characterized by their retention times, mass spectra with comparison to online mass bank database. From the results, Antigonon leptopus can be incorporated in pharmaceutical supplements used to aid free radical-mediated disease; cancer, diabetes, inflammation and liver diseases.

INTRODUCTION: Despite the tremendous progress in the development of new synthetic drugs during the 20th century, plant-based drugs never totally lost their importance in the treatment of several ailments. Antigonon leptopus, is one of the species of belonging to the buckwheat family, Polygonaceae. It is native to Mexico, India and commonly found in tropical Asia, Africa, the Caribbean, and the Americas. It is known as the coral vine or Mexican creeper. It is a fast-growing vine with the stems reaching 20 feet long. It climbs by tendrils which wrap around many types of supports.

Long sprays of showy pink flowers appear in the summer and fall rapidly. Hot prepared tea from the aerial portion of A. leptopus is used for the prevention and treatment of cough, sore throat, flu, and menstrual pains. The flowers are used to treat high blood pressure. The leaves possess anticoagulant, analgesic, anti-thrombin, anti-inflammatory, and anti-diabetic activities. Also, they have been used as hepatoprotective, treating asthma, liver and spleen disorders 1-9. There is no such previous study on the exploration of bioactive compounds using LC/MS (Liquid Chromatography -Mass Spectrometry) of the methanolic extract of the aerial parts of the vine.

Plant Collection: Samples of  Antigonon leptopus used in this study were collected from “El-Zohreya” Park, Cairo, Egypt during the flowering stage (Spring 2012).

A flowering branch was kindly authenticated by Mrs. Terase Labib, plant taxonomist of Orman Garden, Giza, Egypt. The voucher specimen has been deposited in the herbarium of Department of Pharmacognosy, Faculty of Pharmacy, Cairo University “20.12. 15.1”.

Preparation of the Methanolic Extract: The air-dried powder of the aerial parts of A. leptopus (400 gm) was extracted using methanol 70 % with percolation (cold extraction technique) till exhaustion (4 × 4 L). The solvent was evaporated under reduced pressure at 60 ˚C, using a rotary evaporator and the residue was used for successive liquid-liquid fractionation. Total weight of the dried methanol residue was 60 g (15% w:w). The air-dried methanolic extract (60 g) was suspended in distilled water (100 ml) and subjected to liquid-liquid fractionation with solvents of increasing polarity; petroleum ether (5 × 500 ml), methylene chloride (4 × 500 ml), ethyl acetate (6 × 500 ml) and n-butanol (3 × 500 ml) respectively. The solvents were evaporated in each case under reduced pressure at 45 °C using rotary evaporator. The dried solvent-free extractives were weighted.

LC-MS Analysis: The results of the LC/MS analysis revealed the identification of fifty compounds from the methanolic extract of Antigonon leptopus. The compounds were flavonoids, flavones, flavonols, flavanones, bi-flavonoid, phenolics, glycosides, anthocyanins, and amino acids. Two types of experiment were carried out to achieve the objectives of this study. 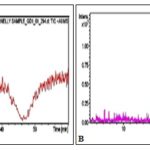 The first experiment is to select the preference of ion polarity. The selection was based on the abundance of ions determined by the intensity of the peaks. In the second experiment, the preferred ion polarity was used for identification of the compounds. The selection of ion was automatically performed by the system. Compounds were characterized by their retention times, mass spectra and comparison to online mass bank database. Total ion chromatogram of the positive mode and the total masses of the identified compounds are shown in Fig. 1. Results of the identified compounds are displayed in Table 1.

CONCLUSION: The LC-MS analysis report has shown that the methanolic extract of the aerial parts of Antigonon leptopus contains various bio-active compounds. The compounds were flavonoids, flavones, flavonols, flavanones, bi-flavonoids, phenolics, glycosides, anthocyanins and amino-acids. All these diversified phytoconstituents might be responsible for the wide pharmacological actions of the vine.

ACKNOWLEDGEMENT: The author is thankful to the Department of Pharmacognosy, Faculty of Pharmacy, Cairo University for all the facilities provided. Special thanks are owed to the Environmental Studies and Research Institute, El-Sadat City, Egypt for carrying out LC-MS analysis of the sample.