ABSTRACT: Herbal medicines have attracted the researcher’s attention nowadays as scientific evidence is coming regularlyon their safety and efficacy. Katan (Linum usitatissimum Linn) is a potent therapeutic agent of Unani medicine for respiratory tract diseases since ancient times. Unani scholars have described Katan as having pharmacological effects, i.e., Mohallil-e-Auram Munaffis-e-Balgham Mulattif Munzij, with its therapeutic uses in various respiratory tract diseases, i.e., Nazla, Zukam, Sual Baghami, Warme Urooqe Khashina, Zeequnafs, and Dama. This literary research is an attempt to highlight the various researches carried out on Katan in many respiratory tract diseases so it can provide guidance to researchers in the coming days. From these studies it has been proved that Katan (Linum usitatissimum) is anti-inflammatory agent. Moreover, it also has an antibacterial, antiallergic effect and has a significant effect on COPD, asthma of childhood and adults. These findings prove the claims of the Unani medical scholars made centuries ago about the therapeutic effects of Katan in various respiratory tract diseases. Based on centuries-old experience of Unani scholars, we can find out solutions of many inflammatory respiratory tract diseases i.e., Chronic Rhinosinusitis, Allergic Rhinitis, COPD, Bronchial Asthma, Bronchitis, etc. with the scientifically proved safe Unani drugs like Katan or its various classical formulations through collaborative multicentric 3rd phase clinical studies.

INTRODUCTION: Herbal medicines have attracted the researcher’s attention nowadays as scientific evidence is coming regularly on their safety and efficacy. So new terms for herbal medicines like phytotherapy, Phytomedicine, phytoneering and nutraceuticals, etc. are coming into the scientific world.

Chronic Rhinosinusitis a very commonly occurring disease; adversely affecting the health of the population world over, which has no definite treatment. A growing amount of scientific evidence suggests that herbal medicine may be helpful as an adjuvant treatment in rhinosinusitis 1.

Katan is a potent therapeutic agent of Unani medicine for respiratory tract diseases since ancient times. Katan (Linum usitatissimum Linn.) is an annual or biennial herb of family Linaceae; it is unknown in a wild state, the origin is uncertain, 60-120 cm high. 2 In Arabic it is known as Bazarul-katan 2, 3, Bazrul Kattana 4, Kattan 5 and in English it is called Linseed, Blaobows and Common Flax 3.

In Chinese it is known as Ya Mazi 5. In Persian it is called Tukhme Katan, Bazrak 6, Zaghu 2, 3, Tukhm Mizaghira, Roghani Zaghira 4. In Sanskrit it is known as Atasi 7, Uma 3, 4, 5, 8 In Unani it is called Leefartas, Katan, Bazre Katan, Tukhme Katan 6 and in Urdu it is called Alsi 4. Unani system of Medicine is based on four Humoral (Akhlat) theory postulated by Hippocrat. Four Akhlat are, i.e., Dam (Blood), Balgham (Phlegm), Safra (Bile), Sauda (Black bile). A proper balance of Akhlat (Humors) within the body ensures efficient metabolism, prevents the build-up of toxins, and maintains health. Humoral imbalance is often the root cause of developing a particular disease with or without coexisting external factors. In the Unani system of medicine there are four principal modes of treatment. These are;

This literary research is an attempt to highlight the various aspects of the pharmacology of Katan and its therapeutic indications described by eminent Unani scholars in the light of various recent researches carried out on respiratory tract diseases. The ultimate goal is to prove the relevance of the centuries-old claims of Unani Medicine with an aim to find out solutions to many inflammatory respiratory tract diseases i.e., Chronic Rhinosinusitis, Allergic Rhinitis, COPD, Bronchial Asthma, and Bronchitis, etc. with the proven safe Unani drugs like Katan through collaborative multicentric 3rd phase clinical studies with modern researchers.

History: Flax is a native to Egypt 4. It has been cultivated since at least 5000 BC, probably first by Mesopotamians and later by Egyptians who wrapped mummies in cloth made from it. Katan has been described by Unani Physician Descoroids (40-90 AD) in De Materia Medica 9. It is a potent drug for respiratory tract diseases as Sina (1030 AD) 10, Khan (1872) 11 and Jurjani (1878 AD) 12 described it under Adviyae Sadriya for the treatment of respiratory tract diseases.

Katan (Linum usitatissimum) in View of Unani System of Medicine: Keeping in mind the long history of the therapeutic use of Katan in Unani Medicine especially in diseases of the respiratory tract, its medicinal profile described by Unani scholar is placed for review in the background of the present medicinal researches on flaxseeds in this particular field. 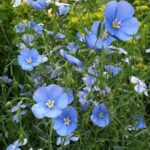 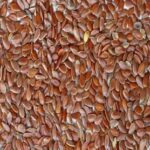 Dose: 5 Masha-1Tola 15, 20, 6 Masha-1Tola 16, 5 gm-7 gm 19, 5-20 gms 21, 10 ½ Masha 18. Two tablespoons of ground flaxseed are recommended doses. According to the European Scientific Co-operative on Phytotherapy (ESCOP), the usual dose of flaxseed for constipation is 5gm of the whole, cracked, or freshly crushed seeds soaked in water and taken with a glassful of liquid 3 times a day 22.

Muzir (Adverse Effects): It delays digestion time, delays transfer of food from the stomach to intestines, so not good for the stomach, less Hemopoeitic / nutritious 13, 14. It disturbs vision, and it becomes hazy, harmful for khusya (Testicles) 18. It weakens digestion/flatulent 15, 16, 26, powers, disturbs vision 16. It causes sexual weakness 2, 27, visual weakness, not good for stomach 5. It is harmful to vision 5 for digestion, testicles 25. Musleh (Correctives): Sikanjbeen 6, 15, 16, 20, 25, Shahad 15, 16, 20, 23, 25, Kishneez 6, 17, 19, 21, 25, 28, 26. For delayed digestion time, delayed transfer of food from the stomach to intestines, bad effect on stomach, less Hemopoeitic action and for disturbed vision, Anar (Pomegranate) and Shahad (Honey) are recommended.

Saturated acids are myristic, stearic and palmatic (5-11%) 31. A unique feature of the polyunsaturated fats in flaxseed is the high ratio of alpha-linolenic acid (an omega-3 fat) to linoleic (an omega-6 fat) 35. The risk of toxicity from flaxseed consumption due to cyanogenic glycosides and cadmium appears negligible for most individuals when flaxseed products are consumed in moderation. The level of vitamin B antagonist-linatin in flaxseed has never been associated with toxicity in humans 36.

Precautions: Don’t use immature flaxseeds as these are poisonous 33. Do not use flaxseeds in pregnant and lactating mothers, prostate cancer patients 34.

Contraindication: Flaxseed is contraindicated in the following conditions; Ileus, stricture of esophagus and GIT, acute inflammation of esophagus, stomach opening and intestine 21.

Nutritional Studies: In a study, it showed that roasting effectively reduces the anti nutritional factors like cyanogenic glycosides contents of flaxseeds 37.

Antibacterial Effect: Hydrolysed Linseeds oil has potentially useful antibacterial properties as a topical preparation against Staphylococcus aureus strains resistant to antibiotics 32. In an antibacterial study of Flex seeds proteins, it was revealed that it has an inhibitory effect on Escheria coli, Salmonella spp, and Klebsiella spp, Enterococcus faecalis 41.

In an animal study, it was observed that long-term flaxseed supplementation protected the mice against bacterial colonization of lungs with Streptococcus pneumonia with reduced histo-pathological involvement of lung tissue. The difference in the levels of pro-inflammatory (TNF-α and IL-1β) and anti-inflammatory (IL-10) cytokines were observed in the flaxseed fed animals 42.

In an antimicrobial study of Flax seeds, total protein extract was examined against several microorganisms using the microbial micro-plate dilution method; the result showed that flaxseed proteins have an inhibitory activity on bacteria especially against Enterococcus faecalis, Salmo-nella typhimurium and Escherichia coli 38.

In an animal study, it was demonstrated that Flaxseed supplementation has significantly reduced lesional area of skin test response of atopic horse, reduce inflammation and alter the fatty acid profile of hair 44. In a clinical study it was found that flaxseed oil given at 14g/day to human subjects over 4 weeks decreased the level of tumour necrosis factor-α (TNF-α), interlukin-6 (IL-6) and cytokines 36.

Antiallergic Effect: Role of dietary long‐chain polyunsaturated fatty acid (PUFAs)  consumption during pregnancy  and  early childhood and its  influence  on  allergy  and respiratory  diseases  as  the long‐chain  polyunsaturated  fatty  acids  have  been  reported  to have  immunomodulatory effects 47.

Anti-COPD Effect: Epidemiological and observational studies strongly supported the efficacy of omega-3 fatty acids in the prevention or amelioration of asthma and allergic diseases. Molecular mechanisms have been revealed in part by the identification of fatty acid bioactive metabolites; generated via lipoxygenase and cyclo-oxygenase. The specialized pro-resolving mediators (SPM) possess anti-inflammatory properties, offering a more precise understanding of these benefits in inflammatory responses 48.

A newly identified group of lipid mediators produced from the oxidation of n-3 fatty acids (EPA and DHA) include Rv and PD, which have also been suggested as key players in the resolution of inflammation. Reduced inflammation attenuates the severity of asthma, including symptoms (dyspnoea), and thereby exerts a bronchodilatory effect. The n-3 fatty acid intervention studies on asthmatics have shown that there is a possible beneficial role of n-3 on asthma as well as EIB 49.

A randomized controlled clinical study on 60 patients of COPD, equally distributed in Test and control groups, was carried out. In Test group a Pharmacopeial Unani formulation “Lauq Katan” (Linctus of Linum usitatissimum L. mucilage)was given in a dose of 10 gm thrice daily and in control group Theophylline 200 mg was given thrice daily for 6 weeks. On the basis of spirometry parameters FEV1 and FEV1/FVC; it was observed that the test drug Lauq Katan had a significant effect in the management of COPD 51.

DISCUSSION: From history, it is evident that Katan is in medicinal use since ancient times by traditional medicine like Unani, Ayurvedic, Persian, and Chinese medicine, etc. In Unani Medicine, Katan has been placed under the category of Adviyasadriya (respiratory medicine). Its use as a single drug or as an ingredient of compound formulation as Lauq Katan from its mucilage and also from its seeds are recommended for treatment of NazlaBarid/Muzmin, Zeequnafs 28.

From the above studies, it is proved that Katan (Linum usitatissimum) is a potent anti-inflammatory agent. Moreover, it also has antibacterial, antiallergic effect and has a significant effect in COPD, especially in asthma of childhood and adults, Chronic Rhinosinusitis. Roasting of flaxseeds increases its nutritional value and its medicinal efficacy, which is the age-old practice of Unani medical practitioners. The recommended dose of 5-10 gms in UM has been approved by ESCOP.

On the basis of the centuries-old experience of Unani scholars, we can find out solutions for many inflammatory respiratory tract diseases, i.e., Chronic Rhinosinusitis, Allergic Rhinitis, COPD, Bronchial Asthma, Bronchitis, etc.

We can take the initiative to consider the multicentric III phase studies on the basis of findings of published PG clinical studies of Unani scholars and can find out the solution of various respiratory diseases as mentioned above with safe, efficient, economic Unani Medicines like Katan (Flaxseeds) or its various classical formulations.