ABSTRACT: 16 different bacteria were isolated from soil collected from and near Aurangabad city. All of the isolates were screened for L-asparaginase activity using modified M-9 medium. Spectro-photometric determination of L-asparaginase was done, and it was partially purified using ammonium sulphate precipitation. Out of the bacterial species screened only two were found to be producers of L-asparaginase. The Biochemical identification revealed both the species to be of the genus Bacillus. The crude extract showed a low enzyme activity as compared to partially purified extract. Both the isolates gave a maximum enzyme activity at pH 8 and a temperature of 40 °C. The genus Bacillus has become a promising candidate for the production of L-asparaginase from the other reported bacteria.

monomers each monomer have 326 amino acid residue, and the whole efficient enzyme exists as a tetramer of identical subunits, with the molecular weight between 140 and 160 kDa mass 3, 4. Asparaginase occurs in many animal tissues, plants, vertebrates, bacteria, actinomycetes, and algae but not in human blood. L-asparaginase II is widely distributed in both eukaryotic and prokaryotic cells and has been intensively studied over the past five decades.  L-asparaginase II is produced by a large number of organisms such as E. coli, Erwinia cartovora, Pseudomonas aeruginosa, Serratia marcescens 8. L-asparaginase was also reported from B. cadaveris and P. vulgaris which were isolated from soil 5. It has been observed that eukaryotic microorganisms like yeast 6 and fungi have a potential for asparaginase production 7.

Another, potentially important application to asparaginases is in the food industry. As a food processing aid, asparaginases can effectively reduce the level of acrylamide up to 90% in a range of starchy foods without changing the taste and appearance of the end product. On the other hand, reproductive toxicity, genotoxicity, and carcinogenicity are further potential human health risks, by animal studies. Therefore, the use of L-asparaginases to hydrolyze asparagine in food as well as in the development of an immunoassay (ELISA) for the analysis of asparagine content could be a useful approach to reduce the extent of acrylamide formation 9.

Sampling and Isolation: Soil samples were collected from nearby suburbs of Aurangabad City. Pre-sterilized plastic bags were used for the collection of soil samples. Bacterial cultures from the soil samples were isolated by using the serial dilution method, and the respected dilution was placed on nutrient agar medium containing (g/l) peptone, 5.0; beef extract, 3.0; sodium chloride, 3.0; agar, 15 and pH 7.0 ± 0.2. All the constituents were added in 50 ml distilled water and the volume was made up to 100ml and autoclaved for 15 min at 121 °C. All the inoculated plates were incubated at 37 °C for 24 h and observed for bacterial growth.

Screening of Asparaginase Producers: The well isolated colonies after the incubation period were plated on modified M9 medium 10 containing (g/l): KH2PO4, 2.0; L-asparagines, 6.0; MgSO4.7H2O, 1.0; CaCl2.2H2O, 1.0; glucose, 3.0; agar, 20.0; phenol red (few drops) as indicator. The inoculated agar plates were incubated at 37 °C overnight along with a control plate in which asparagine was absent. The pink colored colony was selected for further studies. The cultures were purified using subsequent transfer and were stored on slants at 4°C until further use.

Production and Purification of L-Asparaginase: Submerged fermentation was used as a method for the production of L-asparaginase. The pressurized flasks containing (g/l): KH2PO4, 2.0; L-asparagine, 6.0; MgSO4.7H2O, 1.0; CaCl2.2H2O, 1.0 and glucose, 3.0 medium were inoculated with a loop-full of log phase bacterial cultures and was incubated on a rotary shaker at 37 °C  for 24 h. After the incubation, the content of the fermentation broth was centrifuged at 10000 rpm for 10 min, and the crude enzyme was extracted. TLC of the extract was done to check the conversion of L-asparagine into L-Aspartic acid. The partial purification of the enzyme was done using fractional precipitation using ammonium sulphate at 35%, 50% and finally 80%. Protein estimation was done using the Biuret method. The partially purified enzyme was estimated spectrophotometrically by estimating the ammonia produced during L-asparaginase catalysis using Nessler’s reagent at 480 nm.

Effect of Temperature and pH on Asparaginase Activity: The assay mixture containing the partially purified enzyme and the substrate was tested for the effect of temperature and pH on the asparaginase activity. A series of the flask containing the enzyme mixture was exposed to a temperature regime of 20° C to 70° C for 10 min and a  pH range of 5-8 respectively, the reaction was stopped by adding 0.1 ml of 1.5 M TCA. The mixture from all the tubes was centrifuged at 5000 rpm for 10 min, and the supernatant was collected, and the enzyme activity was measured as described above.

RESULT AND DISCUSSION: The enzyme L-asparaginase has been intensively investigated over the past two decades owing to its importance as an antineoplastic agent 11, although the enzyme has been found in a variety of bacteria, fungi, yeast, and mammals. Few of these purified preparations have proceeded antitumor activity.

TABLE 1: CHARACTERIZATION OF BACTERIAL ISOLATES BASED ON GRAM REACTION AND CELL MORPHOLOGY

Some investigators have been producing L-Asparaginase from different biological systems. Howard and James 12 has used a wild type E.coli k12 strain for the production of L-Asparaginase. Some bacterial species have been investigated by Peterson and Ciegler in 1969 13. They screened 44 species belonging to different genera for the enzyme production. A Bacillus species form soil has been investigated for the production of L-asparaginase. In the present study, 16 different bacteria were isolated from the soil samples collected in the nearby area of Aurangabad city. The bacterial isolates were designated as in Table 1. The morphological and gram nature of the isolate was studied.

TABLE 2: BIOCHEMICAL CHARACTERIZATION OF 7B AND 12C ISOLATES

The biochemical characterization revealed both the isolates to be Bacillus species they were designated as ASP-I and ASP-II. Similar, results were obtained by Moorthy et al., 2010, who has isolated a Bacillus species from soil and investigated for the production of asparaginase using modified M-9 medium.

The application of the enzyme L-asparaginase in the area of biomedical sciences demands a high degree of purity of this enzyme. The intracellular enzyme was purified from the E. caratovora using ammonium sulphate precipitation; dialysis and anion exchange chromatography 1, 14 has purified L-asparaginase from Erwinia carotovora by ammonium sulfate fractionation (60–70%), Sephadex G-100, CM-cellulose, and DEAE Sephadex chromatography. In the case of extracellular   L-asparaginase from Bacillus the purification of the enzyme was done by ion exchange chromatography using DEAE column 5.

In this study both the isolated Bacillus species showed maximum growth at 24 h of submerged fermentation in the presence of glucose as a carbon source and nitrogen source as asparagines followed by production of the enzyme. The TLC results showed that an Rf value of sample ASP-I was 0.26 and Rf value of ASP-II was 0.25 is almost the same to that of standard L-aspartic acid, i.e. 0.27. The specific activity and the protein concentration of both crude and partially purified enzyme are reported in Table 3. 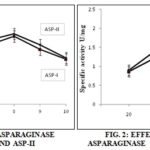 Has reported 17 a maximum activity of L- asparaginase from Streptomyces gulbargensis at pH 8.5, while 18. Reports an optimum pH as 7.5 produced by marine actinomycetes. L- asparaginase produced by bacterial species such as Serratia marcescens, Mycobacterium sp. and Pseudomonas sp. have shown the enzyme activity in the range of 8.0 to 8.5. These variations in pH optima for L-asparaginase may be due to the strain of the organism used, the chemical composition of the substrate, fermentation system and finally the conditions under which fermentation takes place 19. The activity of L-asparaginase was also studied for optimum temperature; it was found that both the cultures ASP-I and ASP-II were able to show maximum activity at a temperature of 40°C Fig. 2. A temperature of 37 °C has been observed by Moorthy et al., 2010, using a soil isolate of Bacillus species. An increase in the enzyme activity was observed in a temperature range of 25°C-35°C isolated from Aspergillus terreus through solid-state fermentation. Maximum activity of L-asparaginase was observed at 40 °C produced by Streptomyces albidoflavus 19.