ABSTRACT: Genus Memecylon belonging to the family Melastomataceae is a large shrub or a small tree native to Western Ghats of India. Memecylon species are reported to show various biological activities and are also used as medication in herpes virus infection. RNases and proteases are involved in the replication of herpes simplex virus (HSV). The present study was taken up to screen RNase and protease (trypsin and thrombin) inhibitors in different solvent extracts of Memecylon species viz., M. umbellatum, M. malabaricum, M. wightii, M. edule and M. talbotianium. The methanol extract of the leaves of Memecylon species was observed to strongly inhibit RNase, trypsin, and thrombin functions in a dose-dependent manner. The percent inhibition of RNase activity ranged from 53-84% in 50 ug/mL of plant extracts. The highest inhibition was observed in M. malabaricum and M. wightii for RNase. Similarly, for trypsin the percent inhibition ranged from 55-68% in 1 mg/mL of plant extracts. Highest inhibition was observed in M. malabaricum, M. wightii, and M. talbotianium. For thrombin the percent inhibition was between 44-52% in 1 mg/mL of plant extracts. The extracts from M. umbellatum, M. edule showed moderate inhibition. M. malbaricum extracts that had shown promising results were further fractionated using silica gel column chromatography, where 20:80 ethyl acetate: methanol fraction showed good protease as well as ribonuclease inhibitory properties. This study provides an important clue for scaling up further work on managing the herpes virus infection using Memecylon extracts, and this is the first report on RNase and protease inhibition in Memecylon species.

INTRODUCTION: Plant sources as targets to isolate antiviral compound was limited, mostly due to the highly infectious nature of viruses and difficulty in identifying plant metabolites. Antiviral potential of plant extracts against viral strains resistant to conventional antiviral agents have challenged the modern drug discovery practices and explored the natural antiviral components of medicinal plants 1, 2.

In the field of pharmaceutical research, enzyme inhibition is an important area that has resulted in the discovery of a number of useful drugs. Specific inhibitors interact with enzymes and block their activity towards their corresponding physiological substrates. The importance of enzyme inhibitors as drugs is enormous, since these molecules have been used for treating a large number of physiological conditions. Plant-derived protease inhibitors serve in the defense mechanisms of plants against pests and plant pathogens. These inhibitors can be classified into a number of families on the basis of their specificities to inhibit the cleavage of specific peptide sequences within proteins 6.

Ribonucleases are a ubiquitous and functionally diverse group of enzymes that have a common ability to cleave RNA. Bovine pancreatic ribonuclease A (RNase A) provides an illuminating example of enzymatically mediated general acid-base catalysis. This digestive enzyme functions to hydrolyze RNA to its component nucleotides 7.

Memecylon is used in local medicine practices to treat mild bacterial infections to inflammations and skin ailments such as herpes and chickenpox 8. Various biochemical activities such as anti-oxidant, anti-inflammatory, anti-cancer, Hepato-protective, neuro-protective, nephroprotective, and cyto-protective properties of this plant have already been studied 9. It is evident from ethnic medicine practices that the plant shows the inhibitory effect on the herpes virus, which could be studied further, and also, these enzymes are involved in the replication of herpes simplex virus (HSV) 7. The present aim of the study is to explore viral replication inhibitory activities (anti-protease and anti-RNase) of plant extracts derived from five species of Memecylon using in-vitro biochemical assays.

Plant Sample Collection: Different Memecylon species viz., M. umbellatum, M. malabaricum, M. wightii and M. edule, were collected from Sringeri region in Western Ghats of Karnataka State, India. Leaves of the collected plant samples were authenticated by plant taxonomists. The leaves were separated, washed to remove adhering dust particles under running tap water, followed by a slow drying at a regulated temperature of 30 °C. The dried leaves were ground to a coarse powder using the mechanical grinder and stored at 4 °C.

RNase Enzyme Activity Assay: RNase assay was carried out spectrophotometrically Galiana et al., 1997 10 with slight modification using 0.1 M sodium acetate buffer (pH 5.2) for extraction instead of 50 mM Tris–HCl buffer (pH 7.0). The plant extracts (50 µl) were incubated for 2 h at 37 °C in 250 µl of 50 mM Tris–HCl (pH 7.0) buffer containing BSA (0.01%) and yeast RNA (400 µg mL-1). After incubation, the remaining RNA in the reaction mixture was precipitated with ethanol in the presence of 2.5 M ammonium acetate (30:1) and resuspended in 100 µl of distilled water. Optic density was measured at 260 and 280 nm (the ratio ranged from 1.7 to 2.0). One enzyme unit is defined as the change in one OD at 260 nm mg-1 of protein per hour. Diethylpyrocarbonate (DEPC) was used as a positive (standard) inhibitor.

Protease Inhibition Assay (Trypsin and Thrombin): All the extracts were subjected to protease inhibition assay according to the method of Jedinak et al., 2010 5, with some modification. Tris buffer (100 mM) of pH 7.5 was prepared by dissolving 12.1 g of Tris (hydroxymethyl)-amino-methane in distilled water and adjusted pH 7.5 with HCl (5 M). The stock solution of trypsin was prepared by dissolving 2 mg of trypsin in 10 mL of 1.0 mM HCl. N𝛼-benzoyl-DL-arginine-paranitro-anilide hydrochloride (BApNA) was dissolved in DMSO (20 mg/mL). An enzyme (0.3 mL) and inhibitor (100 𝜇L) were incubated at 37 °C for 15 minutes, and then 0.6 mM substrate was added, and the final volume was made 2.5 mL with Tris buffer. The reaction mixture was incubated at 37 °C for 30 min. The reaction was quenched by adding 100 𝜇L of acetic acid (30%) and read the absorbance at 410 nm using UV/Vis spectrophotometer. Phenyl-methanesulfonylfluoride (PMSF) was used as a positive inhibitor. A similar procedure is carried out for thrombin.

Partial-purification of Methanol Crude Extract of M. malabaricum: Fifty grams of powdered leaves of Memecylon species were extracted in a Soxhlet apparatus with hexane, ethyl acetate, methanol and water to obtain extracts with different polarities. The extracts obtained from hexane, ethyl acetate, methanol and water were 0.86, 1.21, and 4.32 g, respectively. Only the methanol extract was selected for further purification as it exhibited highest RNase and antiprotease activity. Soxhlet methanol extract (2 g) (5 mg/mL) was subjected to separation by silica gel column chromatography. A glass column (55 cm - 2.2 cm dia) was equilibrated bypassing ethyl acetate repeatedly. The methanol extract was loaded on to the packed glass column. The flow rate was set to 10 mL/min. The column was eluted with a methanol-ethylacetate mobile phase with the following increasing polarity: 100:0, 80:20, 60:40, 40:60, 20:80, and 0:100. Six fractions were collected from the methanol extract to obtain active fractions. The effluents were collected in a flask and allowed to dry. The yields of six fractions collected were 0.136, 0.246, 0.312, 0.263, 0.353, and 0.472 g. In-vitro bioassays (RNase & Protease) were carried out on all collected fractions to find the active fraction.

Statistical Analysis: All experiments / measurements were made in triplicate, and all the values are expressed as the Mean ± SE of three replicates.

In-vitro RNase Activity: RNase assay is widely used to evaluate and control pathogen infection. Different extracts of Memecylon species at various concentrations, i.e., 30, 40, and 50 μg/mL, showed RNase activity in a dose-dependent manner with respect to standard Diethylpyrocarbonate (DEPC) Fig. 1. The methanol extract of both M. malabaricum and M. wightii showed the highest percent inhibition at 50 μg/mL with 81 and 84% inhibition of RNase activity compared to all other extracts, whereas M. umbellatum, M. edule, and M. talbotianum showed moderate activity. 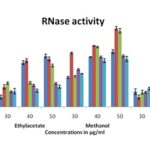 In-vitro Antiprotease Activity: Memecylon plant extracts obtained from the leaves were screened for antiprotease (Trypsin and thrombin) activity using chromogenic bioassay. In this study methanol extracts of M. malabaricum, M. wightii and M. talbotianum showed strong inhibition of protease trypsin with percent inhibiton of 62-68% in 1 mg/mL of plant extract with respect to positive control phenyl methane sulfonyl fluoride (PMSF). Similarly, for thrombin, the percent inhibition of 52-55% was observed in M. malabaricum, M. wightii, and M. talbotianum. All other extracts showed moderate activity Fig. 2 & 3. However, M. malabaricum and M. wightii showed the broadest spectrum of inhibition activity against in tested proteases and seemed to be a prospective new source of natural products as inhibitors of proteases. 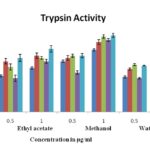 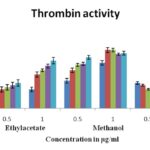 Effect of Methanol Solvent Fraction of M. malabaricum: The methanol extract of M. malabaricum was subjected to silica gel column chromatography. Among the eluted fractions, the fraction with an ethyl acetate–methanol ratio of 20:80 showed the highest activity for both RNase and Protease assays Table 1. Hence, this fraction was selected as an active fraction.

TABLE 1: RNASE AND PROTEASE ACTIVITY FOR THE FRACTIONATED METHANOL CRUDE EXTRACT OF M. MALABARICUM (AT 50 μg/ml)

Similarly, for trypsin the percent inhibition ranged from 55-68% in 1 mg/mL of plant extracts with respect to standard PMSF. The highest inhibition was observed in M. malabaricum, M. wightii and M. talbotianum. For thrombin the percent inhibition was between 44-52% in 1 mg/mL of plant extracts Fig. 1, 2, and 3. The extracts from M. umbellatum, M. edule showed moderate inhibition. Jedinak 5 reported protease inhibition by Rhus typhina. Although the metabolites responsible for this activity were not investigated, tannins and triterpenes have been isolated from the leaves of Memecylon 12. Elsewhere, both tannins and triterpenes have shown to be strong inhibitors of HSV and HIV-1 Reverse transcriptase in-vitro 13, 15, with potential specificity of action 16. Similar results were observed in the study of antiviral potential by checking protease inhibition of medicinal plants such as Vernonia cinerea, Hemigraphis reptans, Hedyotis auricularia, Laurentia longiflora, Tridax procumbers and Senna angustifolia against dengue virus infection 17.

In previous studies, extracts obtained from Memecylon species have been shown to have strong antioxidant, anti-inflammatory, antidiabetic and antimicrobial effects against Staphylococcus aureus and Candida albicans 11-12. S. aureus is implicated in skin infections, while infection with C. albicans manifests as oral thrush and vulvovaginitis. The prevalence of S. aureus, and C. albicans as opportunistic infections in viral diseases such as Herpes, HIV/AIDS are well documented 18-20. It is also possible that the beneficial effects of decoctions/paste made from M. malabaricum leaves on Herpes patients may be linked to its inhibition of common opportunistic infections of bacterial or fungal etiology. We are employing a bioassay-guided fractionation protocol to isolate and chemically characterize the molecule responsible for its activity.

Since RNases and Proteases are effective in removing damaged and infected tissues from wounds and thus play an important role in the wound healing process 6, 22. These enzymes may be used to debride both adherent slough and eschar. Since Memecylon species have been used traditionally in the treatment of skin infections, this study provides an important clue for scaling up further work on managing the herpes virus infection using Memecylon extracts or metabolites.

CONCLUSION: In conclusion, the study had shown that M. malbaricum extracts have promising RNase and protease inhibition, the characterization of bioactive compounds from this plant will have the highest bioactive applications in the treatment of several viral infections.

ACKNOWLEDGEMENT: The authors acknow-ledge the UGC fellowship scheme (Or. No. DV9/192/NON-NETFS/2013-14 dated: 11-11-2013) and recognition of the University of Mysore as an Institution of Excellence and financial support from the Ministry of Human Resource Development, Government of India through UGC under UOM/IOE/RESEARCH/1/2010-11, dt 22-04-2010 project.