ABSTRACT: Aim of the Study: This study aimed to investigate the effect of ethanolic extract of fruits Coccinia indica Wight & Arn. (Cucurbitaceae) on urolithiasis in rats. Materials & methods: Thirty-six male rats were randomly divided into six groups (n = 6). Ethylene glycol (EG) 0.75% in drinking water were fed to all groups (Groups II-VI) except normal control (Group I) rats for 15-28th days to induce urolithiasis. Group III-VI rats were treated with ethanolic extract Coccinia indica of at doses 100, 200, 300 mg/kg, respectively, for 28 days. Positive control (Group II) rats were treated with EG alone. Group, I rats was administered drinking water and distilled water (6 μl/g) by gavage. After 15-28th days, blood samples were collected and analyzed for serum concentrations of calcium, Inorganic phosphorus, Blood urea, and creatinine. The kidneys were removed and sectioned for histopathological examination. The data were presented as mean ± standard error of the mean and analyzed using one-way analysis of variance P<0.05 was considered statistically significant. Results: In the present in-vivo study, renal stone inducing treatment to male rats resulted in hyperoxaluria. Ethanolic extract of Coccinia indica (at 100 and 200 mg/kg) exhibited a dose-dependent significant antilithiatic activity on treatment. The extract dose of 100 mg/kg also caused reduction of calcium, oxalates, phosphorus, and creatinine in blood serum level the results were found statistically significant. The antilithiatic effect of ethanol extract at was found effective than the reference standard. Histopathology of the kidneys in Groups V and VI revealed less tissue damage and were almost similar to Group I rats.

INTRODUCTION: The use of plants and plant products as medicines could be traced as far back as the beginning of human civilization. Medicinal plants are a source of great economic value all over the world. Nature has bestowed on us a very rich botanical wealth, and a large number of population and the major part of traditional therapy involves the use of plant extract and their active constituents.

Following the advent of modern medicine, herbal medicine suffered a setback, but during last two or three decades, advances in photochemistry and identification of plant compounds, effective against certain diseases have renewed the interest in herbal medicines 2.

Nowadays multiple drug resistance has developed due to the indiscriminate use of commercial antimicrobial drugs commonly used in the treatment of infectious disease. In addition to this problem, antibiotics are sometimes associated with adverse effects on the host including hypersensitivity, immune-suppression and allergic reactions 3. This situation forced to search for new antimicrobial substances.

Therefore, there is a need to develop alternative antimicrobial drugs for the treatment of infectious diseases from medicinal plants. Antimicrobials of plant origin have enormous therapeutic potential 4. They are effective in the treatment of infectious diseases while simultaneously mitigating many of the side effects that are often associated with synthetic antimicrobials 5. The beneficial medicinal effects of plant materials typically result from the combinations of secondary products present in the plant. In plants, these compounds are mostly secondary metabolites such as alkaloids, steroids, tannins, and phenol compounds, flavonoids, steroids, resin fatty acids gums which are capable of producing definite physiological action on the body 6. Coccinia indica belongs to the family Cucurbitaceae. It is growing wild throughout India and also cultivated in various parts of India. It is commonly known as kundru 7.

The whole plant is traditionally used for various medicinal purposes. Leaves of this plant are used in Indian folk medicine for treatment of the number of ailments including diabetes, wounds, ulcers, inflammation, in eruptions of skin, fever, asthma, and cough. Earlier scientific investigation of Coccinia indica showed that the crude extract has hepatoprotective 8, 9 10, 11, 12, 13, anti-diabetic hypolipidemic 14, 15, 16, 17, antibacterial 18, and anthelmintic activity 19, analgesic and antipyretic activity 20, wound healing activity 21, anti-inflammatory 22, 23 though the plant has been reported for many biological activities, no scientific data available to identify the genuine sample.

The present investigation was therefore taken up to establish the identity of fresh and dried fruits anti- urolithiasis activity for the standardization of the drug.

Collection and Authentification: The fresh fruits of wildly growing plant Coccinia indica were collected from the field areas of eastern Uttar Pradesh region during September 2012. For identification and taxonomic authentication, a sample of plant material was given to National Vrakshayurveda Research Institute (NVRI) Jhansi, India. The text report from National Vrakshayurveda research institute, Jhansi, India and confirmed the authenticity of plant material sample was Coccinia indica with voucher Specimen no. NVRI -SOP-20932, 01-09-2012. Collected plants were shade-dried and coarsely powdered. Fruits of Coccinia indica Wight & Arn. and authentication specimen record card gave respectively in Fig. 1 and Fig. 2. 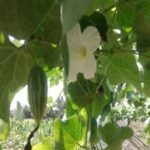 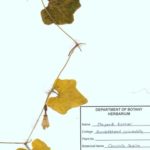 Extraction of Plant Materials: 250 g coarse powder of air-dried fruits of Coccinia indica were packed in a muslin cloth and subjected to Soxhlet extractor for continuous hot extraction with petroleum ether and ethanol for 8 hrs separately. Then each extract was filtered, and the filtrate was evaporated to dryness.

Chemical (Drugs & Solutions) and Apparatus: All the chemicals were analytical grade. Cystone was obtained from Himalaya Health Care Ltd. The ethanolic extract of plant Coccinia indica Wight & Arn. fruits were given with Tween 80 as vehicle administered orally. All chemicals were used of analytical grade available; Ethylene glycol was obtained from Merck Ltd., Mumbai, India.

Preparation of Dose: The dose of 100mg/kg, 200mg/kg, and 300mg/kg of ethanolic extract were selected for the test. All the doses were given orally after making a suspension in the vehicle, i.e. 1% Tween 80 and the standard drug, i.e. Cystone was given orally (750 mg/kg) in the vehicle.

Animal Selection: Male albino rats of Wistar strain weighing between 150-200 gm were selected for the antiurolithiatic activity. Animals were housed in polypropylene cages with the filter tops and maintained at 25 ± 2 ºC; relative humidity 55 ± 10% under controlled conditions of 12-h light: 12-h dark cycle. The animals were fed up with commercial rat chow and were given water ad libitum. All protocols of the study were approved by the Institutional Animal Ethical Committee with reference number BU/PHARM/IAEC/12/024. The committee approves the IAEC for control and supervision of experiments on animals (CPCSEA) with registration number 716/02/a/CPCSEA.

Acute Oral Toxicity: The limit test of acute oral toxicity was carried out, and the relatively high LD50 value is determined by administering a dose of 50, 100, 150, 200, 400, 800, and 1000 mg/kg and mortality are observed after 24 h. The LD50 6 was determined graphically as describe earlier. It suggested that within this dose range is relatively safe and non-toxic to rats as no observable acute toxicity effect was produced.

Kidney Histopathology and Homogenate Analysis: The abdomen was cut open to remove both kidneys from each animal. Isolated kidneys were cleaned off extraneous tissue and rinsed in ice-cold physiological sal­ine. The right kidney was fixed in 10% neutral buffered formalin, processed in a ser­ies of graded alcohol and xylene, embedded in paraffin wax, sectioned at 5 ml and stained with H and E (Haematoxylin and Eosin) for histopathological examination. The slides were examined under a light microscope to study light microscopic archi­tecture of the kidney and calcium oxalate deposits. The left kidney was finely minced, and 20% homogenate was prepared in Tris-HCl buffer (0.02 mol/l, pH 7.4). Fig. 4, 5, 6, 7, 8 and 9 of the kidney histopathology given below. 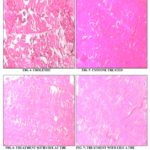 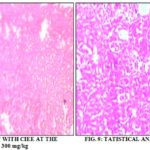 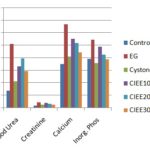 DISCUSSION: The present work was to carry out with the objective of ethanolic extract of fruits Coccinia indica Wight & Arn., phytochemical investigation, evaluation of the antilithiatic activity (in-vivo) against ethylene glycol induced lithiasis model. As the oral route usually takes traditional medicines, the same route of administration was used for evaluation of the protective effect of the CIEE against ethylene glycol induced urolithiasis in rats. Male rats were selected to induce urolithiasis because the uri­nary system of male rats resembles that of humans and earlier studies have shown that the amount of stone deposition in female rats was significantly less.

The biochemical mechanism for this process is related to an increase in the urinary concentration of oxalate. Stone forma­tion in ethylene glycol fed is caused by hyperoxaluria, which causes increased renal retention and excretion of oxalate renal calcium oxalate deposition by EG (ethylene gly­col) in rats is frequently used to mimic the urinary stone formation in humans. Therefore, this model was used to evaluate the protective effect of fruits Coccinia indica Wight & Arn. against urolithiasis. Normal urine contains many inorganic and organic inhibitors of crystallization; magnesium is one such well-known inhibitors. Low levels of magnesium are also encountered in stone formers as well as in stone-forming rats.

Administration of CIEE had profound effects on minimizing the excretion of protein and thus might have prevented the nidus formation for crystal nucleation. The result showed the nephroprotective effect of fruits Coccinia indica Wight & Arn. in ethylene glycol induced urolithiasis model. An earlier study reported a high hypoglycemic and anti-inflammatory capacity of fruits Coccinia indica Wight & Arn. Therefore, CIEE may prevent calcium oxalate crystal deposition in the kidney by preventing hyperoxaluria-induced peroxidative damage to the renal tubular membrane surface (lipid peroxidation), which in turn can prevent calcium oxalate crystal attachment and subsequent development of kidney stones.

CONCLUSION: It can be concluded that the present study on C. indica fruits can serve as an important source of information to the reduction in oxalate excre­tion was observed on CIEE treatment. This decreased excretion of oxalate may be due to the inhibition of the formation of oxalate by the plant extract. The extract dose of 100 mg/kg also caused a partial reduction of calcium, oxalates, phosphorus, and creatinine in blood serum level the results were found statistically significant. The antilithiatic effect of ethanol extract at was found effective than the reference standard. Fruits of Coccinia indica Wight & Arn. better antilithiatic activity but it shows mild to moderate antilithiatic activity against ethylene glycol induced model.