INTRODUCTION: Recently, all over the world, there is upsurge and interest among scientific institutions, biological research institutes in the use of medicinal plants crude extracts or active ingredients to treat various ailments. There is a revival of interest in herbal medicines. Medicinal plants accumulate primary and secondary metabolites like alkaloids, flavonoids, steroids, tannins, and volatile oil, mineral and vitamins possess medicinal properties.

Medicinal plant constitutes natural medicine and plays a significant role in providing primary health care services to all living organism. They serve as therapeutic agents as well as important raw material for the manufacture of traditional and modern medicines. People of the entire world use various medicinal plants different type of diseases. One of the disease known as a kidney stone. Kidney stones one of the painful disorder of the urinary tract are ancient one and still remain a common problem worldwide.

Lithiasis is the formation of calculi or stone which is a concretion of material mainly mineral salts in any part of the body. Antilithics are an agent that prevent the formation or promote dissolution of formed calculi 1.

Kidney stone usually comprised of a compound called calcium oxalate are the result of an accumulation of dissolved minerals on the inner lining of the kidneys. A kidney stone is a hard mass developed from crystals that separate from the urine and build upon the inner surfaces of the kidney. Normally, urine contains a chemical that prevents the formation of the crystal in the inner surfaces of the kidney. These inhibitors do not seem to work for everyone, so some people form stones. If the crystal remains tiny enough, they will travel through the urinary tract and pass out of the body in the urine without being noticed 2.

Lithiasis mostly occurs in any part of the whole urinary tract which includes the ureter, urinary bladder, and kidney as well as it also occurs in the gall bladder. Stone formation in the kidney is one of the oldest and most widespread diseases known to man 3.

The pathogenesis of calcium oxalate stone is a multi-step process and in essence includes- nucleation, crystal growth, crystal aggregation, and crystal retention. The stone formation requires supersaturation also depends on urinary pH, ionic strength, solute concentration, and complexations. Various substances in the body affect one or more of the above stone forming processes, thereby influencing a person’s ability to promote preventing stone formation. Promoters of stone formation facilitate stone formation while inhibitors prevent it 4. In spite of substantial progress in the pathophysiology and treatment of urolithiasis, there is no satisfactory drug to use in clinical therapy. Endoscopic stone removal and extracorporeal shock wave lithotripsy are prohibitively costly, and recurrence is quite common with these procedures. Thus a drug for the prevention of this disease or its recurrence would be of great interest. The use of antilithic herbs and concoctions for treating renal stones has been practiced long before the use of modern medicine 5.

The Crystallization studies of calcium oxalate (CaOx) have been an interest to the researchers and urologists for many years. The medicinal plants contain chemical compounds which themselves possess an inhibitory effect in the crystallization of calcium oxalate. The use of some natural substances as inhibitors in the formation of nephrolithiasis allowed us to study the inhibitory effect Coleus Aromaticus Benth. On the inhibition of COD crystal. In this work, we have used the model turbidimetric 6.

Coleus Aromaticus Benth. is a commonly available medicinal herb in India. Coleus is a name which derives from an earlier classification under the genus name coleus species included in genus Plectranthus. It is believed that there are 150 species of it. This herb is native to the East Indies and is widely cultivated in Africa and almost all tropical countries. It is also popularly known as “Indian oregano” & pathorchur in Hindi. It is recorded in the Indian system of medicine as one of the sources of pashanbheda. The plant was chosen for study Coleus Aromaticus Benth. belonging to the family Lamiaceae. It grows to a maximum of 1.5 to 2 meters and has a thick green stem.

The leaves of the plant are thick, succulent and juicy. The plant emanates mild, a pleasant odor which increases when cut or crushed 7. The leaves of this plant are traditionally used for the treatment of severe bronchitis, asthma, diarrhea, epilepsy, renal and vesicle calculi and fever 8. It is considered to be an antispasmodic, stimulant and stomachic and is used for the treatment of a headache, epilepsy, and dyspepsia 9.

It is used to treat conditions such as indigestion, diarrhea, nervous tension, insect bites, toothache, earache, rheumatism, whooping cough, and bronchitis 10. Coleus aromaticus has been reported to exhibit antilithiatic 11, chemopreventive 12, antiepileptic 13, and antioxidant properties 14. In light of the above study, Coleus aromaticus has been selected for antiurolithiatic activity.

MATERIAL AND METHOD: The leaves of Coleus Aromaticus benth. was collected from Jawaharlal Nehru Krishi University, Jabalpur during October-November, and plant was identified by department of botany Govt. model Science College, pachpedi, Jabalpur. The fresh leaves after the collection was shade-dried. The collected leaves were grounded to course powder this coarse powder was stored in airtight container, and then the powdered leaves were extracted using Soxhlet apparatus with the different solvent system like petroleum ether, ethyl acetate, methanol, while aqueous extract was obtained by percolation for 24 h. The solvent was recovered by distillation, and the extract was dried by using a water bath at 40-50 ºC. The dried extract was stored in an airtight container and kept in a refrigerator.

Experimental Protocol: By taking an equimolar solution of calcium chloride dihydrate was dissolved in distilled water and sodium oxalate was dissolved in 2N H2SO4. Calcium oxalate precipitate was generated by mixing solution in tris buffer. The effect of the extract on calcium oxalate crystallization was determined by time course measurement of turbidity changes due to the crystallization in 0.025 M CaCl2 on the addition of 0.025M sodium oxalate solution. The precipitation of calcium oxalate at 37 ºC and pH 7.4 has been studied by the measurement of Turbidity at 620 nm using UV/Visible spectrophotometer (Shimadzu) 15. Antilithiatic activity in a different extract of leaves of Coleus aromaticus Benth. was investigated as per the method of Burns and Finlayson with slight modification 16.

Study without Inhibitor: A volume of 1.0 ml of 0.025 M CaCl2 was transferred into the cell, and 2 ml of Tris buffer added to it, and blank reading was taken. The 1 ml of 0.025 M Sodium oxalate was added, to the previous volume and the measurement is immediately started for ten min. In each experiment, six replicates were taken for each reading.

Study with Inhibitor: All the extract like petroleum ether, Ethyl Acetate, methanol, water, polyherbal formulation Cystone & Neeri suspended in DMSO solution and filtered through a Whatman filter paper 1 and used at a final concentration of 50 mg/ml.

In an experiment each tube added 1ml of 0.025M CaCl2, 2 ml tris buffer and 1ml equivalent to 50 mg to each tube of different sequential extract of plant coleus Aromaticus were induced to the tube and at the same quantity of the synthetic drug of the polyherbal formulation Cystone and Neeri administered to the test tube, the volume of 0.025 M sodium oxalate was added, and measurement is immediately started for a period of 10 min. for each experiment. Six replicates were taken for each reading 4.

The percentage of inhibition was calculated using the following formula:-

Microscopically Study: The crystal of calcium oxalate (with and without inhibitor was observed using a light microscope equipped with a digital camera. The photographs of CaOx were taken using the objective of 40X eyepiece of 10X`

RESULT: A large number of plants and plant products is used as ethnomedicine to treat urolithiasis as a prophylactic or curative agent. Methanolic extract of leaves of coleus Aromaticus benth. showed high calcium oxalate crystallization inhibition in-vitro as compared to petroleum ether, ethyl acetate, and water extract while cystone & Neeri a prescribed medicine for renal calculi showed the highest inhibition regarding the formation of calcium oxalate precipitation. Fig. 1 shows an initial detectable increase in the turbidity after induction of the crystallization with sodium oxalate, was observed. In the control experiment, the initial step rises in turbidity; the nucleation phase, on attaining its maximum, it was followed by a decrease; the aggregation phase.

DISCUSSION: The result of the present study indicates that methanol extract of leaves of Coleus Aromaticus benth. showed comparable activity to that of cystone and neeri regarding inhibiting the formation of calcium oxalate precipitate. The reduction of stone forming constituents in urine and their decreased kidney retention reduces the solubility product of crystallizing salts such as calcium oxalate and calcium phosphate, thus methanolic extract of leaves of Coleus aromaticus could be further analyzed in-vitro and further characterization of its active compound could lead to a new candidate drug for the patients with urolithiasis. Thus study provides a basis for the utility of Coleus Aromaticus benth. In the treatment of renal and urinary calculi and put forth the possibility of use of Coleus aromaticus as the therapeutic agent to treat urolithiasis. 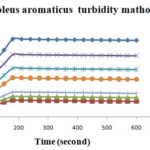 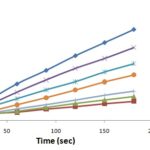 FIG. 1: AN INITIAL DETECTABLE INCREASE IN THE TURBIDITY AFTER INDUCTION OF THE CRYSTALLIZATION WITH SODIUM OXALATE (A)

CONCLUSION: Plant extract have an inhibitory effect on crystal nucleation and aggregation thus may be beneficial for the treatment of kidney stone. But a detailed preclinical and clinical study is required to establish the use of the plant as an antilithiatic agent.