ABSTRACT: The literature survey reveals that the plant Raphanus sativus belongs to the family Cruciferae. It is widely used to treat the viral, bacterial infection, antihepatotoxicity anti lithiasis, Hypolipidaemic, inflammation, and cancer. The study focused on the phytochemical screening of the ethanolic extract of radish bulbs (Raphanus sativus). The molecular masses to provide probable structures and associated molecular properties for its constituents. Alkaloids, flavonoids, saponins, and tannins were analyzed. The following research shows the anticonvulsant activity of R. sativus. Anxiety is an overwhelming sense of uneasiness or discomfort. We have important plants reported anxiolytic activity, uses, models and doses for anxiolytic activity & results.

INTRODUCTION:  Radish, Raphanus sativus (Cruciferae Family) commonly known as muli is a common pungent ingredient used in various abdominal disorders. Almost all parts of the plant including leaves, seeds, and roots are utilized in medicine 1-3. The fresh juice obtained from leaves are diuretic, laxative, roots are used for urinary complaints, hemorrhoids, gastrodynia pains, and various gastric ailments. Radishes have been used as medicinal foods for a variety of ailments including liver dysfunction and poor digestion. Radish extracts have biological activity including antioxidant, antimutagenic and antiproliferative effects. Radishes are rich in ascorbic acid, folic acid, and potassium. They are a good source of vitamin B6, riboflavin, magnesium, copper and calcium 4-7.

They are low in saturated fat and are very low in Cholesterol. One cup of sliced red radish bulbs (116 g) provides approximately 20 cal, largely from carbohydrates. The present study deals with the anticonvulsant effect of Radish ethanolic extract on MES models in rats.

MATERIAL AND METHOD: The fresh radish was purchased from the local vegetable market and authenticated by NVRI a voucher specimen (21950) is deposited at the herbarium for reference 8-10.

Preparation of Extract: The R. sativus were cutting and air dried in the shade. Further coarsely made to prevent the loss of active phytoconstituents, samples were kept under constant observation to avoid any fungal growth.

Extract Preparation: Extracts of R. sativus niger root peel sample were prepared using organic solvents ethanol. The coarse powder root was packed in the Soxhlet apparatus & continuously extracted with ethanol at temp. at 60-80 °C till all the constituents were separated. The success of the extraction with ethanol is directly related to the extent that yellowish colors were removed into the solvent. When the tissues on repeated extraction were completely free of brown, it can be assumed that all the low molecular weight compounds have been extracted.

Thin Layer Chromatography: The TLC studies of ethanolic extract of R. sativus. Shows 6 spots of same colors, with different Rf value in solvent system Benzene: Ethyl acetate: Formic acid (9:1:1) carried out in the lab. It indicates the presence of seven different components in the extracts. Detecting reagent used is 0.5% vanillin in dil. H2SO4 and iodine chamber for the better isolation & identification of the different components of an ethanolic extract of R. sativus Linn.11

Animals: Swiss albino mice (25-30 gm) of either sex (bred in D.R.D.O Gwalior, M.P.) were used. The animals were obtained from animal house of the Institute of Pharmacy, Bundelkhand University, Jhansi; India. The animals were housed in standard cages with free access to food (standard laboratory rodent’s chow) and water. The animal’s house temperature was maintained at 23 ± 3.0°C with a 12 h light / dark cycle. All the experimental procedures and protocols used in this study were reviewed by the Institutional Animal Ethics Committee (IAEC) of the Institute with reference no. BU / Pharm / IAEC / 09 / 014 (approved by CPCSEA Regd No. 718 / 02 / a / CPCSEA) 13-15.

Acute Toxicity Test: An acute toxicity study was performed for the extract according to the acute toxic classic method as per OECD guidelines (OECD Guidelines for the testing of chemicals, 2001). Swiss albino mice of either sex were used for acute toxicity study. The method of Up and Down was used to determine the dose. The animals were kept fasting for overnight providing only water, after which the extracts were, administered orally 100, 300, 500, mg/kg dose and percent mortality was observed 24 h then 72 h and after that once daily for 14 days. The ethanolic extract of root of Raphanus sativus (Linn.) did not cause any mortality up to 5000 mg/kg during the observation period of 24 hrs then 72 h and after that once daily for 14 days and was considered as safe. The oral LD50 of the ethanolic extract estimated in mice must be > 5000 mg/kg.

Maximal Electro Shock Model: For the assessment of anticonvulsant activity, the animals were divided into five groups of five animals each Swiss albino mice.

Group V received 500 mg/kg of RSEE suspended in polyethylene glycol Corneal electrodes were used for bilateral delivery of electrical stimulus. Electroconvulsive shock (50 mA for 0.2 sec) was delivered through the corneal electrode to induce Hind Limb Tonic Extensor (HLTE) phase in mice. There are five phases observed in mice after giving maximal electroshock. The five steps are

TABLE 1: ASSESSMENT FOR ANTICONVULSANT ACTIVITY OF CONTROL BY MES MODEL 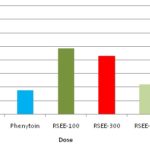 Statistical Analysis: The results are expressed in mean ± S.E.M. (n=5) Statistical analysis was done by one way ANOVA, followed by Dunnett multiple comparison tests vs. control. P<0.05 was considered as statistically significant.

RESULT AND DISCUSSION: Ethanolic extract of Raphanus sativus Linn. in experimentally induced convulsion in rats. An acute toxicity study was performed for the extract according to the acute toxic classic method as per OECD guidelines. Swiss albino rats of either sex were used for acute toxicity study. The method of Up and Down was used to determine the dose. The animals were kept fasting for overnight providing only water, after which the extracts were, administered orally 100, 300, 500, 2000, 5000 mg/kg dose and percent mortality was observed 24 h then 72 h and after that once daily for 14 days.

The ethanolic extract of roots of R. sativus Linn. Did not cause any mortality up to 5000 mg/kg during the observation period of 24 hrs then 72 hrs and after that once daily for 14 days and were considered as safe. The oral LD50 of the ethanolic extract estimated in mice must be > 5000 mg/kg. Ethanolic extracts of Raphanus sativus Linn. Significantly reduced the elevated level of convulsion. The histopathological findings also show sign of improvement after treatment with extract. All these observations provided the basis for the conclusion that Raphanus sativus Linn L. root extract inhibit the convulsion induced by phenytoin treatment.